This holiday season, Microsoft really wants you to sign up for its monthly Xbox Game Pass Ultimate subscription service. To start, for a limited time you can once again get the first three months of the service, which bundles together the company’s Xbox Live Gold and Game Pass subscriptions together, for just $1. Additionally, the company is throwing in one free month of EA Access, three free months of Discord Nitro and six free months of Spotify Premium. 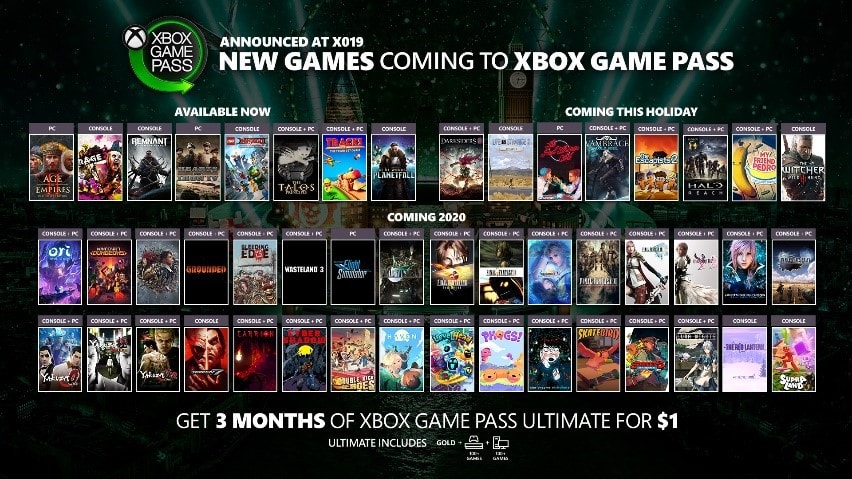 Even if you take into account the fact that in some countries such as the US and UK Microsoft already offered a free six-month subscription to Spotify Premium as an incentive to sign up for Xbox Game Pass Ultimate, you’re getting a lot for just $1. Separately, EA Access, Discord Nitro and Spotify Premium cost $5, $10 and $10 per month respectively. What’s more, if you’re already an Ultimate subscriber, Microsoft says you’ll get access to all of the new perks.

As a further incentive for people to subscribe, Microsoft is adding 50 new games to the service — making it one of the most substantial expansions of the service to date. Starting today, you can play eight new games, with over 40 more slated to arrive throughout the holiday season and into 2020. Some of the more notable games that are available today include Age of Empires II: Definitive Edition, Rage 2 and The Talos Principle. Meanwhile, forthcoming highlights include Darksiders III, The Witcher 3: Wild Hunt and 10 Final Fantasy titles.

Xbox Game Pass Ultimate was already one of the better deals in gaming, and after today it’s even better. Of course, whether it makes sense to subscribe will depend on how much time you can find to play all the games that interest you in the catalog.

Source:
Microsoft
In this article:

gaming, microsoft, pc, pc gaming, services, Xbox Game Pass, xbox game pass ultimate, Xbox Live Gold, Xbox One
All products recommended by Engadget are selected by our editorial team, independent of our parent company. Some of our stories include affiliate links. If you buy something through one of these links, we may earn an affiliate commission.