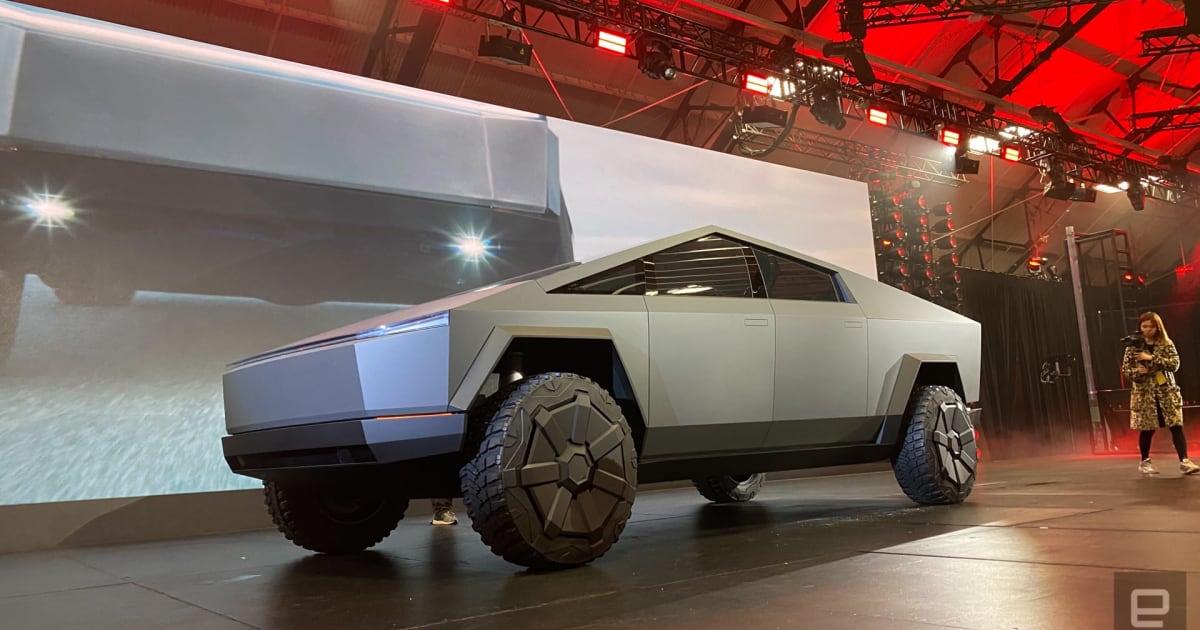 There were a few moments after the Tesla Cybertruck truck appeared on stage when people thought that maybe this was a joke. CEO Elon Musk is known for having fun on Twitter and with his products. Tesla cars have a fart feature for god’s sake. But this wasn’t a gag. The event continued with its hammers and metal balls and surprise ATVs, and we all realized, this is it. This is the truck that Musk and company have been working on, and in a few years, these would be driving around our roads. We better get used to it.

A few hours (yes, hours) after Musk left the stage, I was able to sit, very briefly, in the giant metal series of trapezoids cobbled together, known as the Cybertruck. It’s a very early pre-production vehicle, but my first reaction was, “this is a very comfortable back seat.” It was more comfortable than the pre-production Model Y I rode in after that launch.

I’m not sure why that was my first impression of the interior. Maybe I was tired of standing in line (it was a very long line). While the exterior was all “stabby,” the seating was comfy. If anything, most of the ride wasn’t all that different from just sitting in any other large vehicle.

The ride felt like a truck. When the brakes were applied after hard acceleration, the front end dove like a truck. There was no slalom course or hard cornering during the quick jaunt, so I was unable to see just how a large metal vehicle with a very heavy battery reacted to quick turns. I’m guessing it’s not exactly switchback-corner ready, but in a straight line, it continues the Tesla heritage of accelerating like a rocket.

Oh, that Tesla acceleration. I’m not sure why you want a truck that does zero to 60 in under three seconds, but that’s what the Cybertruck is capable of. The truck took off like a shot, and I watched as the digital display shot up to 65 miles an hour in almost no time. It’s fast, and if that’s your thing, this is your truck.

This is not going to be a mainstream vehicle, by any means. It’s just too odd looking. It’s also not going to appeal to folks looking for a truck for purely utilitarian purposes. In other words, it won’t unseat the Ford F150 for contractors, mechanics and deliveries. One issue is that you can’t readily throw something into the truck from the side of the bed. Those buttresses that slope down from the cabin just get in the way.

It will appeal to those who want something different. Something strange. The interior, while following the path laid down by the Model 3 with a single display for everything, is also full of stark angles. The dash is made of pressed paper and looks like a kitchen countertop. Even the rearview camera is devoid of any soft angles. It’s essentially a rectangle.

There was plenty of leg and headroom for my six-foot three-inch frame in the back seat, which is always a plus when you’re trying to impress your friends with your crazy ’70s sci-fi space truck.

Overall it was a very pleasant — but short — ride in a truck that has a lot of features (locking bed, autopilot support, automatic alignment for hitching a trailer, crazy weird lights) for something that starts at under $40,000.

Yes, the design is insane. Probably too insane for most. And Tesla will have to adjust some of that to comply with regulations. It’ll need to redo the headlights — you just can’t have a string of lights in the US. In fact, all the lights will probably need some rethinking to comply with the law. I don’t think it even has blinkers at this point. Also, it’ll need side mirrors. The steering wheel isn’t actually a wheel, right now. Oh, and Tesla will have to crash that 9mm bulletproof body into a few walls to make sure that, while it can withstand a blow from a hammer, it’ll still deflect and absorb the impact of another car or truck. And the glass will probably need some work.

But while all that happens, I can’t tell you what I think of the Cybertruck’s design. I’m really not sure where I fall on this. Is it so outrageous I love it? Or do I hate it because it’s a series of triangles mashed together? Maybe I’m just somewhere in between. What I do know is that there’s nothing else like it on the road, and for that reason alone, it’s at least worthy of our attention and admiration.

business, cybertruck, first ride, gadgetry, gadgets, gear, green, hands-on, tesla, transportation
All products recommended by Engadget are selected by our editorial team, independent of our parent company. Some of our stories include affiliate links. If you buy something through one of these links, we may earn an affiliate commission.