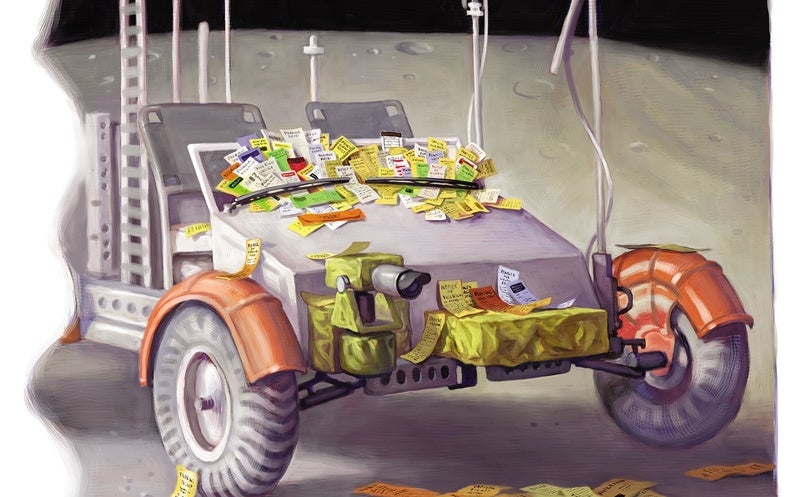 One can learn a lot by browsing Twitter. In early October, for example, I found out that one way to tell if a particular lung cancer treatment (anti-PD-1/anti-PD-L1 therapy) is working is if the gray hair of patients returns to its youthful color; eight species of roundworms were discovered living in California’s Mono Lake despite its high levels of arsenic; and, seriously, the president of the United States tweeted that Democrats “are continuing to interfere in the 2016 Election.” Make that witch hunt a tachyon hunt.

I was also informed, via a tweet by Charles Fishman, author of One Giant Leap: The Impossible Mission That Flew Us to the Moon, that in 2012 NASA published “a comprehensive catalogue of human artifacts on the Moon”: space waste.

The following quiz looks at the stuff left just by the Apollo moon landings. Of the hundreds of pieces of detritus, I chose four from each mission. I then added one item that is not actual lunar trash. Your job is to identify the object that was not in fact left on the moon. Answers follow. Correct responses win you deep personal satisfaction.

Spray can of Vapoorize (as later seen in the 2004 movie Envy, with Ben Stiller, Jack Black, Amy Poehler, and Oscar winners Rachel Weisz and Christopher Walken)

Tardigrades able to survive on a diet exclusively of toenails

Why didn’t the Apollo 15 astronauts leave any defecation collection devices on the moon?

Apollo 11: Buzz’s buzzer. I have shaken his hand and did not receive an electric shock. But if you annoy him enough with claims that the moon landing was faked, he will punch you in the face, as he did in 2002 to a particularly aggressive provocateur who called him a liar and coward.

Apollo 12: Copy of Cat-Women of the Moon. Videocassette technology was too primitive in 1969 to allow movies and a playback system to be sent to the moon without adding a great deal of additional mass that would require significant amounts of extra fuel.

Apollo 13: Read the book! (Did you know that Ron Howard’s brother, parents, wife and oldest daughter were in the movie?)

Apollo 14: There’s no such thing as a Yesmon, although many organizations, businesses and presidential cabinets are filled with yes-men.

Apollo 15: Vapoorize is a fictional feces-removal product and was in any case unnecessary for this mission (Bonus Question answer) because, according to a 1971 nasa press release, “solid body wastes are collected in plastic defecation bags … sealed after use and stowed in empty food containers for post-flight analysis.” Probably back on Earth.

Apollo 16: Rice spice. Rice does not require a specific spice, although saffron and cardamom are popular spices for use with rice.

Apollo 17: Tardigrades. Although they can’t be conclusively ruled out.