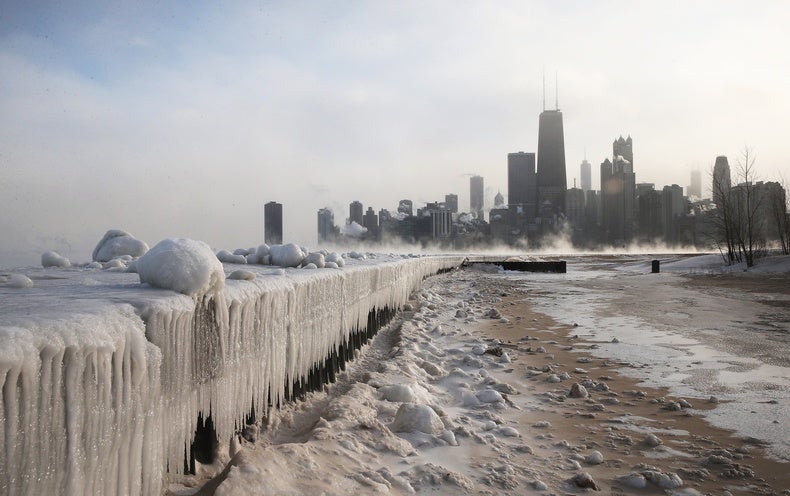 Chicago is taking a climate beating from Lake Michigan.

City beaches and parks are disappearing under record-high water levels. Autumn gales are landing 12-foot waves against Lake Shore Drive. Federal, state and city agencies are scrambling to armor the shore, and infrastructure repair is taxing an already cash-strapped city.

Like other major coastal cities, Chicago can’t afford to lose the fight. Lake Michigan’s shoreline is the city’s raison d’être, giving meaning to its title as capital of the “Third Coast.”

High water has chewed away millions of cubic yards of sand and soil on the city’s north and south shores. Last week, the Chicago Department of Transportation and the Chicago Park District initiated an emergency shoreline protection project at Juneway Beach about 10 miles north of downtown, with additional projects to follow at other nearby beaches.

A city spokeswoman said the lake is about 3 feet higher than average for the month of November, and a quarter-inch below the record high-water mark for November.

“People who don’t frequent the lake in the winter are going to see a very different shore than the one they remembered from the end of the last beach season,” said Rob Moore, a Chicago-based climate adaptation expert with the Natural Resources Defense Council.

On the South Side near Jackson Park, where pedestrian and bicycle paths are flooded or simply gone, the Army Corps of Engineers will begin constructing a massive rip-rap barrier along the lakeshore just north of the future Barack Obama Presidential Library. The city will also extend 5,000 feet of “jersey barriers” along eight lakefront sections to mitigate wave action and flooding.

“Ensuring that the lakefront remains open and accessible to all Chicagoans is a top priority for us,” Chicago’s acting transportation commissioner, Tom Carney, said when the first round of flood control projects was announced in September.

Experts say Lake Michigan’s assault on Chicago is being fueled by climate change.

Near-record precipitation fell over the basin in 2018 and 2019, tipping the lake’s balance between water inputs and evaporation, and driving lake levels to their highest measure since 1986. Lake storms are more frequent and pack greater power, posing additional risks to boaters, fishermen, and lakeshore residents, businesses and tourists.

“This is the kind of year that may be more typical than not,” said Don Wuebbles, a professor of atmospheric sciences at the University of Illinois and lead author of a recent report examining climate change impacts on the Great Lakes. Wuebbles said the primary climate signal across the basin is one of greater instability, in both precipitation and lake levels, with dramatic rises and falls punctuated by extreme events.

And while shoreline inundation and erosion will be the city’s main challenges, inland flooding from winter gales is a part of the city’s history. In February 1987, a 70-mph north wind produced 20-foot waves sending water across Lake Shore Drive into nearby residential high rises.

If Chicago’s shoreline challenges seem daunting, it’s even worse on Lake Michigan’s eastern shore, where houses are teetering over the lake’s high bluffs and water is enveloping small towns along a severely scarped shoreline (Climatewire, Aug. 22).

Conditions are less perilous along downtown Chicago’s hardened waterfront, Moore said, where much of the shore is already encased in concrete and lined with pilings and revetments.

“But it’s a real issue farther south and north of the city, where you have a lot of private property that’s lakefront,” he said. “It’s causing all kinds of issues, really, the most immediate of which is there’s a lot less room between the lake and people’s homes.”

While fixes to high lake levels are expensive but feasible today, Chicago could face a far more difficult future with respect to climate change over the next century. That’s because the city is experiencing a relative subsidence, or dipping, toward the lake due to what’s called “isostatic rebound.”

Scientists say the phenomenon, which is happening very slowly, involves the upward lift of northern landmasses that were compressed by glaciers during the last ice age. Since the glaciers receded, the northern Great Lakes Basin has been rising while the lower reaches of the basin, including Chicago, are falling relative to lake levels.

Scientists say that by the end of the century, Lake Michigan’s average lake levels will be about 4 inches higher at Chicago’s Navy Pier than today, even with no additional increase in precipitation.

Reprinted from Climatewire with permission from E&E News. E&E provides daily coverage of essential energy and environmental news a twww.eenews.net.