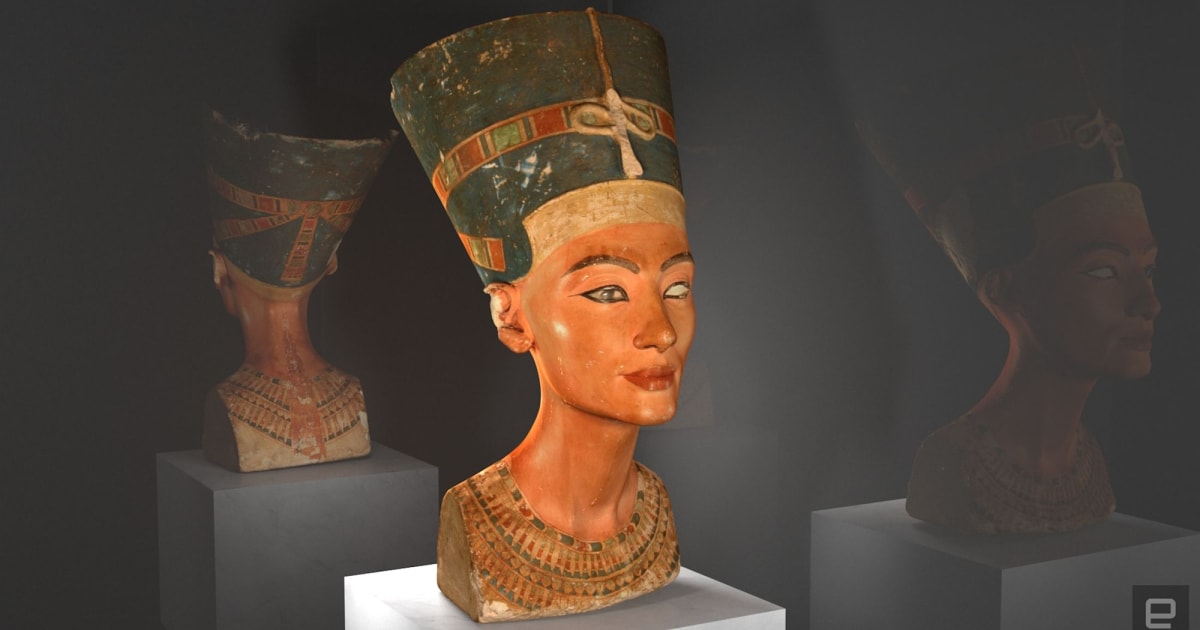 Can museums can really “own” the digitization of cultural heritage artifacts? The bust of Nefertiti shown above is a 3D rendering I created myself on 3DS Max from a digital file, obtained by artist Cosmo Wenman after three years of persistence. Now, anyone can download it and marvel at this masterpiece, to get a closer look than you ever could at Berlin’s Neues Museum, where the bust itself resides.

The story behind the the digital file started like an intellectual property heist film. A pair of artists claimed to have somehow sneaked into the museum with a 3D scanning rig and captured a surprisingly detailed digital replica of the bust, according to a story in the New York Times.

A number of experts noticed that the quality of the scan was much too high to have been done so hastily and declared it could only have been performed by the museum itself, according to Slate. Once Wenman realized that, he set out to obtain a copy of the file and make it available to the public. Since the Neus Museum is state owned, he initiated an FOIA-like request to get access.

“German freedom of information laws … grant everyone an unconditional right to access official information from federal agencies,” he explained in a Reason article. “That goes for any official record — conventional files, electronic records, drawings, graphics, plans and sound or video recordings.”

Despite the clear-cut law, the state was reluctant to give up the files, worried they would threaten gift shop sales. “The Egyptian Museum sells expensive Nefertiti replicas in its gift shop, and it implied that it needs to protect that revenue to finance its ongoing digitization efforts,” said Wenman. “This argument against open access is known as the ‘gift shop defense.'”

After a lot of back and forth, the museum finally relented and handed over the digital files on a USB key. However, they left it to Wenman to clean up and distribute the scan. The scan also contained a surprise: A copyright notice on the bottom of the bust, along with a non-commercial Creative Commons license.

“It’s unclear which elements of their digital copy of the bust of Nefertiti SPK imagines it has a copyright in,” wrote Wenman. “The original artifact is clearly in the public domain.”

To test it myself, I imported the file into 3DS Max and rendered it using Chaos Group’s V-Ray renderer. The level of detail on the model is incredible, letting you see the unbelievable craftsmanship that went into the 3,364-year-old bust, along with every chip, crack and scrape that happened over time. You can also see the scans and rotate around them on Wenman’s Sketchfab page, and download them from there as well.

The results are incredible, but Wenman wished he didn’t have to go through the three-year effort to bring the scan to the public. “Unfortunately, SPK’s stalling tactics and bad-faith arguments are not unique. (I’ve gone through something similar in my efforts to get the Rodin Museum in Paris to release its unpublished scans.),” he said. “I hope other museums will see SPK’s policy as an example of what not to do with their 3D data.”

3D File, art, Bust, Creative Commons, Egyptian Museum of Berlin, gear, Nefertiti, Scan, TheBigPicture, thenewbigpicture
All products recommended by Engadget are selected by our editorial team, independent of our parent company. Some of our stories include affiliate links. If you buy something through one of these links, we may earn an affiliate commission.