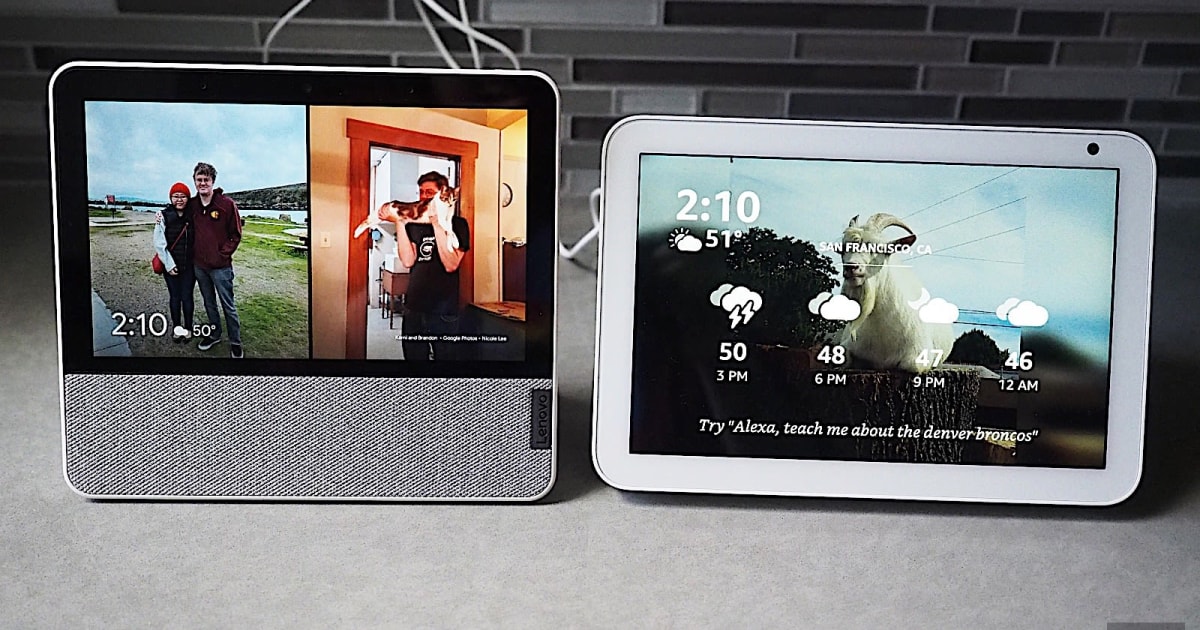 Amazon’s Echo Show was the only smart display on the market in 2017, but fast forward a couple years later and devices like these have become ubiquitous. Much of that is due to competition from the likes of Google, which in addition to making its own hardware, has licensed out its tech to third-party manufacturers like Lenovo. Plus, two years on it’s become clear that smart displays are actually useful — they do everything smart speakers can, with a dash of helpful visuals. Now that there are so many smart displays, though, they’ve started to look and feel very similar, which can make buying one a little confusing.

Amazon’s Echo Show 8 is the middle child between the small Echo Show 5 and the larger 10-inch Echo Show. The display is sharp and colorful, and the audio quality is very impressive, with deep bass and clear highs. Like other Alexa displays, it offers NBC, Hulu and Amazon Prime video, and it also supports video calling via Skype. Yet, it still suffers from a rather cumbersome interface, and the Alexa app isn’t very intuitive. 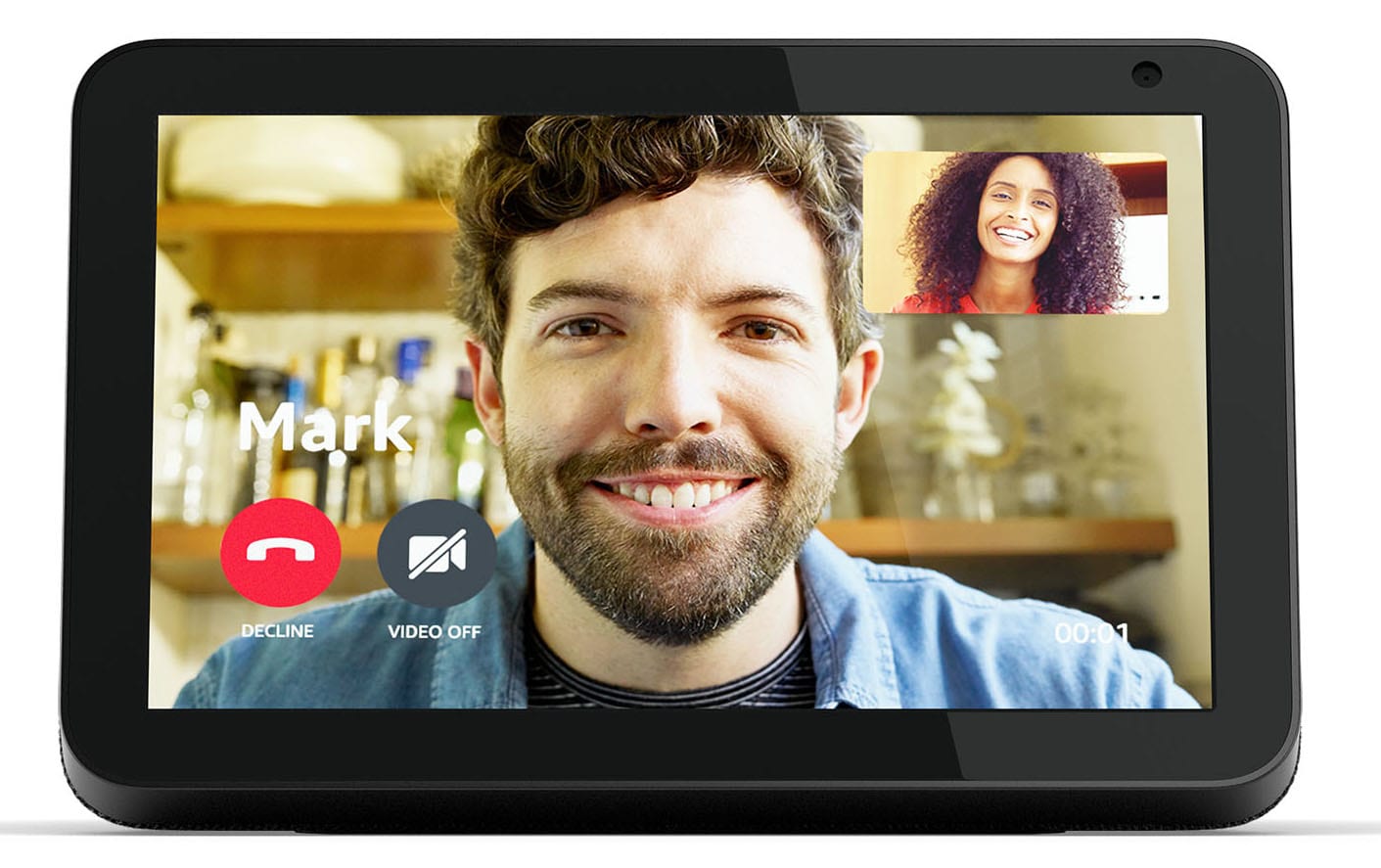 Be the first to review the Echo Show 8?
Your ratings help us make the buyer’s guide better for everyone.

Now, there are two more models entering the fray. Amazon has unveiled the Echo Show 8 ($130), which lies somewhere in between the second-gen Echo Show and the Echo Show 5. Lenovo, on the other hand, has released the Smart Display 7 ($130), its third attempt at making a Google smart display. Given how crowded this category has become, we thought it made the most sense to compare the two side by side. You guys do comparison shopping — well, we do comparison reviewing.

The Echo Show 8 and the Lenovo Smart Display 7 are roughly the same size, with the Show 8 taking up a bit more real estate. The Echo Show 8 is pretty much identical to its predecessors, with the display dominating the front and the speaker housed around back. It’s a little bigger than the 5, and a little smaller than the 10-inch second-gen model. As a result, it’s not quite small enough to belong on your nightstand, but it could be a good fit in other areas of the home. I like the look of it in my kitchen, for example.

The Lenovo Smart Display 7 has a minimal design as well. Unlike previous Lenovo smart displays which had a speaker on the left, the Smart Display 7’s speaker sits below the panel. This design makes it look a little more like a miniature TV set and less like a digital photo frame. All told, it’s not quite as inconspicuous as the Echo Show 8 or other Google displays like the Nest Hub.

Of the two, I prefer the look of the Echo Show 8. Its curved corners and display-centric design are much more appealing to me. While the Lenovo Smart Display 7 isn’t unattractive, per se, I do think its design a little retro and dated next to the Echo Show 8.

I should note here that both models have similar hardware features such as a camera shutter, a microphone mute toggle and volume controls. Both also have ambient light sensors that adjust the screen brightness according to their surroundings.

With a 1,280 by 800 screen, the Echo Show 8 is one of the better Alexa smart displays out there. It delivers crisp and vibrant images, accurate colors and deep, dark blacks. Videos look fantastic, and the panel even makes my humdrum iPhone photos look surprisingly well lit.

The Lenovo Smart Display 7, on the other hand, doesn’t look quite as sharp, with only 1,024 by 600 resolution. On its own, I didn’t think it looked that bad. The resolution is actually on par with the Google Nest Hub, which also has a 7-inch screen. In fact, I think it’s even a little brighter and a touch more colorful than Google’s. Yet, when placed side by side with the Echo Show 8, photos on the Lenovo Smart Display 7 just look dull and pixelated by comparison. It’s a shame, because I do prefer Google’s photo display algorithms to Amazon’s, but I can’t deny that the display on the Echo Show 8 is superior.

One of our favorite features on the 10-inch second-gen Echo Show is its audio quality, and thankfully, the Echo Show 8 is more of the same. Thanks to a pair of 2-inch, five-watt neodymium speakers and a passive bass radiator, the sound is simply stellar, with deep, thumping bass, clean highs and impressive volume.

The Lenovo Smart Display 7 has two 1.5-inch five-watt speakers and a passive radiator as well, which also produces good audio. The volume certainly seems much louder than on the Nest Hub as well as previous Lenovo smart displays. But again, when compared side by side to the Echo Show 8, it just doesn’t fare as well. The Lenovo Smart Display 7’s audio sounds flat next to the Echo Show 8, and the bass is nowhere near as powerful.

Aside from hardware differences, all Amazon smart displays essentially have the same underlying software, and the same goes for Google’s. Neither the Echo Show 8 nor the Lenovo Smart Display 7 has anything new to speak of here, as the firmware is about the same as their predecessors.

Still, it’s worth recapping what sets them apart. Google smart displays obviously work especially well if you have an existing Google account. Mere moments after setting up the hardware, the display will have access to your calendar and your photo library without much fuss on your part. Thanks to Google’s photo algorithm, you can set it up to automatically pull in pictures of friends and family, and the Live Photos feature ensures that any new shots will appear on the display too. There’s also YouTube, YouTube TV, step-by-step cooking instructions and all the usual benefits of Google Assistant. As you might expect, Google displays work well with other Google products like Nest thermostats and Nest cams. As far as video calls, though, they’re only compatible with Google’s Duo service.

Amazon’s smart displays, on the other hand, don’t offer a native YouTube experience. Instead, video options include Amazon Prime, NBC and Hulu. If you want to watch YouTube, you can do so via one of two built-in browsers: Silk and Firefox. The Echo Shows also have step-by-step cooking instructions from sources like SideChef and AllRecipes, along with an exclusive Food Network app.

You can display your own photos on Echo Show devices as well, but the process isn’t exactly intuitive. Plus, rather than showing your photos in the foreground, Amazon’s smart display software uses them more like wallpaper, with news headlines and weather forecasts taking center stage. Of course, instead of Google products, the Echo Show plays nice with other Amazon products like the Fire TV Stick and Ring cams. You can use an Echo Show to make video calls with any other Echo Show, plus it works with Skype too.

Purely from a software standpoint, I tend to prefer Google-based offerings. The setup for the Lenovo Smart Display 7 was so easy that I was ready to go in minutes. I love the intuitive interface, Google’s smart photos algorithm, and having a native YouTube app is also a nice touch.

Setup on the Echo Show 8, on the other hand, is a bit e of a pain: You have to use the display’s touchscreen to enter login details instead of using the app and syncing photos is not quite as easy. (You have to choose between Amazon Photos and Facebook, and neither has the smart photo sorting algorithm that Google does.) I do think Amazon wins out in offering more video options and Skype has a lot more users than Google Duo, but those factors aren’t enough to sway me.

I should note, however, that the Lenovo Smart Display 7 lacks some of the camera features you’ll find on the Google Nest Hub Max. That includes include face recognition, which allows the device to differentiate between different users, as well as gestures, which lets you play and pause media simply by holding up your palm to the camera. I especially like that you can use the camera in the Nest Hub Max as an additional Nest cam, so you can check in on your house when you’re away.

Based purely on hardware, there is no doubt that the Echo Show 8 wins out over the Lenovo Smart Display 7. It looks better, the display is brighter and more colorful, and the audio is superior as well. Yet, when it comes to software, I slightly prefer the Google system. If I had to choose between the two, I’d definitely pick the Echo Show 8. But, if given other options, I would probably opt for another smart display altogether, like the Google Nest Hub Max, which has the same features as the Lenovo Smart Display 7, but a more appealing design, more camera features, and a bigger, sharper screen.

amazon, amazon echo show 8, gear, lenovo, lenovo smart display 7, personal computing, personalcomputing, review
All products recommended by Engadget are selected by our editorial team, independent of our parent company. Some of our stories include affiliate links. If you buy something through one of these links, we may earn an affiliate commission.