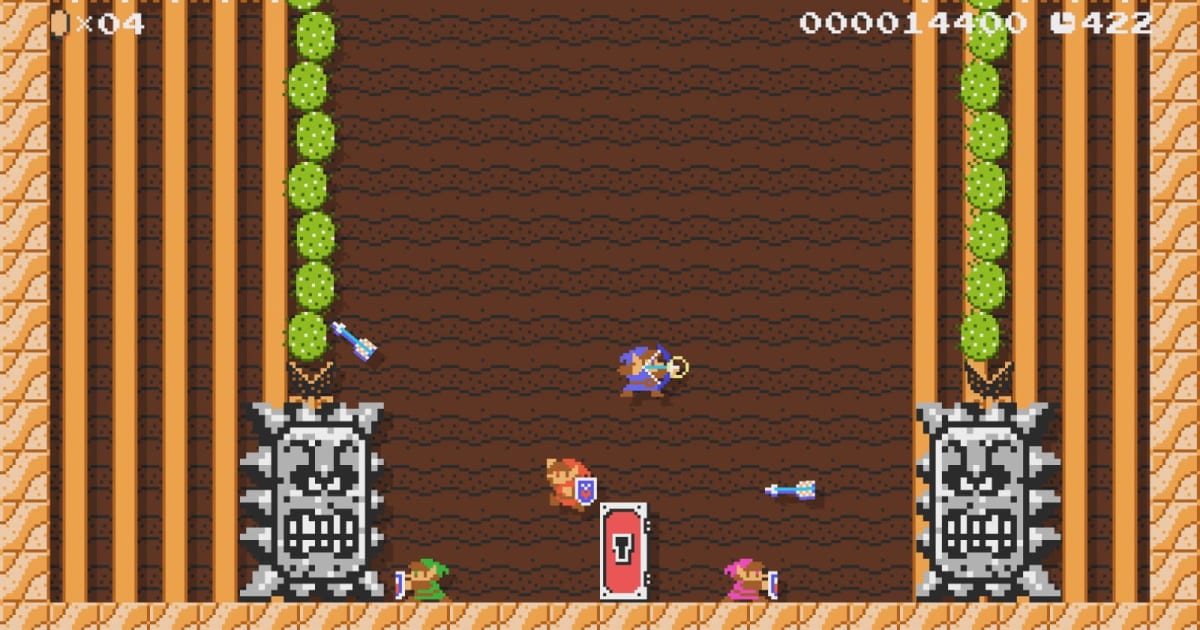 Super Mario Maker 2 level creators will have a few more tools to play with when the 2.0 update for the Nintendo Switch game drops Thursday. The biggest addition this time around is Link of Legend of Zelda fame.

In the original Super Mario Maker, players could adopt one of more than 150 different guises by grabbing a Mystery Mushroom. Those costumes, which included Link, were largely cosmetic. This time around, he’ll have a range of abilities that are set to shake up gameplay.

Link will only be available in Super Mario Bros. courses via a powerup. He’ll have his trusty Master Sword, with which he can slash away at enemies and dash horizontally or downwards through them. He can protect himself with his shield and use bombs and his bow. It might be as close as we get to a true Super Zelda Maker anytime soon, beyond the dungeon creator in the Legend of Zelda: Link’s Awakening remake.

The new Master Sword item will also be available to use exclusively in the 8-bit Super Mario Bros. style! When this new course part is picked up, Mario transforms into Link, equipped with a new set of moves like attacking with a sword, shooting arrows & dropping bombs. pic.twitter.com/AdY8NK0lK4

New items in the update include a frozen coin, which you can melt with fire elements, including fireballs and the angry sun. When you hit P Switches, you might find that they temporarily activate or deactivate P Blocks as indestructible platforms or barriers. In Super Mario 3D World stages, you may also start to see Dash Blocks, which provide a speed boost when you step on them.

There are a pair of enemies joining the fray as well: Spike (the one that hurls spike balls towards Mario) and stacked cactus foe Pokey. They’ll have different attributes depending on the stage theme — in snow levels, for instance, Spike will chuck snowballs instead.

You’ll have another game mode to check out after the update drops too. Through timed Ninji Speedruns challenges in levels Nintendo created, you’ll face off against Ninji ghost versions of other players who’ve played the same stage. The ghosts are drawn from players who are about as good at the game as you are, so it should prove a bit of a challenge no matter your skill level. You’ll be ranked based on how quickly you zip through a stage.

Each challenge will be live for around a week and you can scoop up stamp rewards you can redeem for Mii costumes. You’ll still be able to play the courses in an attempt to beat the ghosts and pick up stamps after each event wraps up. You can start trying the speedrun challenges after the Super Mario Maker 2 update arrives on Thursday.

av, gaming, legend of zelda, legendofzelda, link, nintendo, nintendo switch, nintendoswitch, super mario maker, super mario maker 2, supermariomaker, supermariomaker2, switch, the legend of zelda, thelegendofzelda
All products recommended by Engadget are selected by our editorial team, independent of our parent company. Some of our stories include affiliate links. If you buy something through one of these links, we may earn an affiliate commission.