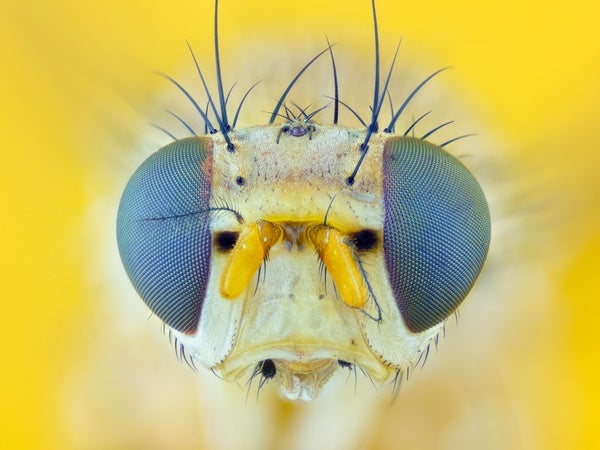 What is the biological basis of thought? How do brains store memories? Questions like these have intrigued humanity for millennia, but the answers still remain largely elusive.

You might think that the humble fruit fly, Drosophila melanogaster, has little to add here, but since the 1970s, scientists have actually been studying the neural basis of higher brain functions, like memory, in these insects. Classic work––performed by several labs, including those of Martin Heisenberg and Seymour Benzer––focused on studying the behavior of wild-type and genetically mutated Drosophila in simple learning and memory tasks, ultimately leading to the discovery of several key molecules and other underlying mechanisms. However, because one could not peer into the brain of behaving flies to eavesdrop on neurons in action, this field, in its original form, could only go so far in helping to explain the mechanisms of cognition.

In 2010, when I was a postdoctoral researcher in the lab of Michael Dickinson, we developed the first method for measuring electrical activity of neurons in behaving Drosophila. A similar method was developed in parallel by Johannes Seelig and Vivek Jayaraman. In these approaches, one glues a fly to a custom plate that allows one to carefully remove the cuticle over the brain and measure neural activity via electrodes or fluorescence microscopy. Even though the fly is glued in place, the animal can still flap her wings in tethered flight or walk on an air-cushioned ball, which acts like a spherical treadmill beneath her legs.

These technical achievements attracted the attention of the Drosophila neurobiology community, but should anyone really care about seeing a fly brain in action beyond this small, venerable, group of arthropod-loving nerds (of which I’m honored to be a member)? In other words, will these methods help to reveal anything of general relevance beyond flies? Increasingly, the answer looks to be yes.

There exist a few dozen cells that project neural fibers into a doughnut-shaped structure in the middle of the fly brain, with each cell branching to fill one of 16 pizza-slice-like wedges that make up the donut. Seelig and Jayaraman first imaged the activity of these neurons in walking flies using fluorescence microscopy via the new methods just described. Remarkably, they observed that this population of cells expresses a single “bump” of neural activity that stably persists at one position around the doughnut while a fly stands still and this activity bump rotates around the doughnut, like a compass needle, when the fly turns left or right.

The bump updates its position around the doughnut most accurately if the fly is given a visual cue that indicates her angular heading as she turns on the floating ball. However, even in complete darkness the bump is still present in the brain, and its position around the doughnut tracks the fly’s orientation (though not as precisely as with a visual cue). These results convincingly argued that flies have an internal sense of orientation, similar to our own sense of orientation in an environment that persists even after we close our eyes.

A graduate student in my lab, Jonathan Green, pushed things one step further. He described a neural circuit mechanism that explains how the activity bump rotates around the doughnut, even in complete darkness, guided by the fly’s internal sense of how fast and in which direction she senses herself to be turning. (A similar circuit was concurrently described by Dan Turner-Evans and Stephanie Wegener in Vivek Jayaraman’s lab.)  Moreover, in our newest work, Jonathan Green, alongside a postdoctoral researcher, Vikram Vijayan, and another graduate student, Peter Mussells Pires, described how flies use the bump of activity to guide navigational behavior.

Specifically, we showed that the fly uses the position of the bump in the doughnut as a compass-like estimate of current heading that is compared with a goal heading (the angle along which the fly wishes to be heading), to determine which way to turn and––quantitatively––how hard to turn and how fast to walk forward. This same basic mechanism is very likely at play in the brains of bees, ants and other more-expert insect navigators, as they make their foraging trips away from and back to the nest.

In the 1980s, James Ranck and Jeff Taube discovered the so-called head-direction cells: neurons in mammals whose physiological properties bear a striking resemblance to the compass neurons just described in flies. Humans almost certainly have head-direction cells as well. In humans or other mammals, however, a neural circuit to explain how head-direction-cell activity updates as one turns remains elusive to this day, as does the precise functional role that these neurons serve in navigation. Thus, apart from insects, our work in Drosophila is laying a foundation that could serve as a road map for analyzing how bigger brains, perhaps even our own, might construct a sense of orientation and use that internal sense to guide navigational actions.

Beyond angular orientation, our understanding of how we remember locations in 2-D or 3-D space or how we perform nonspatial cognitive operations––like keeping track of elapsed time or predicting the likelihood of events happening in the future––remains similarly fuzzy. This is not to say that there has been no progress. Neurons whose physiological activity correlates with many such processes have been found in the mammalian brain, and scientists are even able to artificially activate and inactivate those neurons in behaving animals. However, we still do not have a comprehensive understanding of how brains produce an internal sense of space, time or value, nor how such internal senses guide behavior.

Luckily, Drosophila appear to implement versions of the abovementioned cognitive processes (and likely many others). Because Drosophila offers a small brain alongside some of the most advanced genetic, anatomical and physiological methods in neuroscience, I and others in my field believe that the first detailed neural mechanisms for explaining how such mental processes are implemented will become clear in this insect over the coming years. Our recent success in the angular heading domain could represent the tip of the iceberg with regard to how the fly could make plain the mechanisms underlying many other cognitive operations.

Overall, flies have not been bit players in the history of biology. It is by studying Drosophila that we first learned that genes physically reside on chromosomes, that a transcriptional feedback loop generates the circadian rhythms that pervade almost all life on earth, and that hox genes act as master regulators of body morphogenesis. Given the foundational role served by Drosophila in genetics, circadian rhythms, development and many other fields of science, it should perhaps be of little surprise to see Drosophila now serving a similarly pioneering role in cognitive neuroscience. Research projects that might take years or decades to complete in a rat or a monkey, might take only months to conclude in Drosophila.

This difference means that one can take bigger risks when studying flies and pursue seemingly intractable questions more readily, without betting one’s entire career on a specific answer turning out to be correct. As the fly community amasses initial answers on how Drosophila implement their cognitive computations––even if they are in a reduced form compared to ours––we hope to inspire directed tests for similar mechanisms in mammalian brains, where the initial exploratory work is harder to perform.

One particularly intriguing aspect of studying neurobiology in Drosophila is the possibility of unifying our understanding of cognition at the gene, cell and circuit levels. Most disorders of the mind, like Alzheimer’s disease and other dementias, arise from molecular abnormalities in genes that are largely conserved across humans and flies. Intense efforts have been placed on understanding the pathophysiology of the relevant molecular pathways, but without an ability to robustly link the molecular biology of these pathways to their normal and abnormal role in cognition and behavior.

The premier molecular-genetic methods available in flies, alongside the mature neurophysiological and behavioral approaches, promise to provide deeper insights into how genes, through their effects on cellular and circuit physiology, influence higher brain function and behavior. Thus, flies have the potential to illuminate our basic understanding of cognition alongside paving the way for more rational drug design for mental illness, down the road.

New understandings in cognitive neuroscience are now emerging in Drosophila. Only time will tell the full extent of what we’ll learn when all is said and done, but it seems possible that this tiny insect might help to unravel some of the biggest mysteries of the brain. Stay tuned.