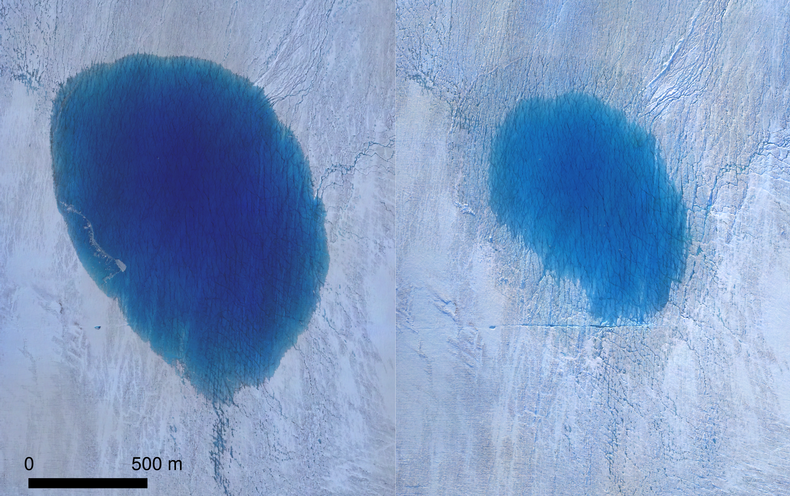 There are few sights as peaceful as the lakes atop the Greenland ice sheet, tranquil pools of sapphire meltwater on a bed of sparkling white. But beautiful as they are, they don’t always last for long. These lakes have a habit of suddenly disappearing.

It’s a process researchers refer to as rapid draining. If a crack opens in the surface of the ice, the water can quickly rush thousands of feet to the bottom of the ice sheet, leaving a gaping hole behind. When it happens, entire lakes can drain in a matter of hours.

It’s a growing subject of interest among glacier experts. When water drains to the bottom of the ice sheet, it can lubricate the bedrock and cause the ice to slip over it at faster rates. This can temporarily speed up the flow of ice into the ocean, where it adds to the rising of global sea levels.

Last summer, a team of researchers witnessed one of these events firsthand—and they were able to document the whole process with the help of special drones. The observations, they say, may help them better understand what causes a lake to abruptly drain and what it means for the Greenland ice sheet as a whole.

“The Greenland ice sheet has really dramatically changed over the last 30 years,” said lead study author Thomas Chudley, a Ph.D. student at the University of Cambridge, noting that the ice sheet currently contributes about a millimeter of sea-level rise each year. “And we need to understand the processes that are going on.”

The site, known as “Lake 028,” had been calmly resting for most of the summer in a corner of west Greenland, not far from Store Glacier at the edge of the sea. Then, following a sudden flurry of seismic activity, a fracture opened in the bottom of the lake and the water began to rush out.

The researchers used their drones, outfitted with both cameras and high-tech GPS, to capture continuous images of the draining lake. They were later able to stitch these images together to create a reconstruction of the complete event.

They found that nearly 5 million cubic meters of water—the equivalent of about 2,000 Olympic swimming pools—drained from the lake in just five hours.

Using sensors they’d set up on the ice, the researchers also found that parts of the nearby ice sheet rose in elevation by as much as 50 centimeters, or more than a foot and a half, as the lake drained. This suggests that the water rushed straight down to the bedrock and caused the ice to lift up—exactly the process that scientists worry about when these events occur.

The findings were published Monday in Proceedings of the National Academy of Sciences.

Drain once, then twice

It’s not the first time this site has rapidly drained. A similar event occurred in the summer of 2017. The researchers believe the earlier event left behind a fracture, which reopened once the lake reached a certain size last year, causing the second draining event to occur.

The findings highlight the way that single sites can become vulnerable to multiple drainage events once a fracture occurs. The researchers also believe that sites like Lake 028 may be able to trigger additional fractures and drainage on other parts of the ice sheet in a kind of chain reaction, causing large amounts of meltwater to rush to the bedrock from multiple sites at once.

And the observations at Lake 028 may also suggest that scientists are underestimating the number of these events that occur each year.

According to Chudley, rapid drainage is typically only noticeable in satellite images if the entire lake disappears. At Lake 028, only about 60% of the water volume actually rushed out, leaving a smaller pool of water behind on the surface of the ice. It’s still a rapid draining event involving a colossal amount of water, but not the type of event that would likely register by satellite.

As a result, it’s possible that more of these events are happening than scientists are aware of.

That said, there’s still some debate among researchers about the extent to which rapid drainage events actually affect ice loss in Greenland. While research has shown that these events can temporarily speed up the movement of ice in some areas, it’s not clear whether it’s enough to make a big difference in the total amount of ice flowing into the ocean.

In fact, the last major report from the Intergovernmental Panel on Climate Change suggested that the increased ice flow driven by rapid drainage events was probably balanced out by other processes.

But while it’s still an open question, Chudley says it’s possible these lakes may have a bigger influence than previously thought.

“Five years ago, it was kind of broadly said these effects will balance out,” Chudley said. “But I think we’re starting to introduce a bit more nuance back into the base. We haven’t solved the problem, but if anything, we’ve made it more complicated.”