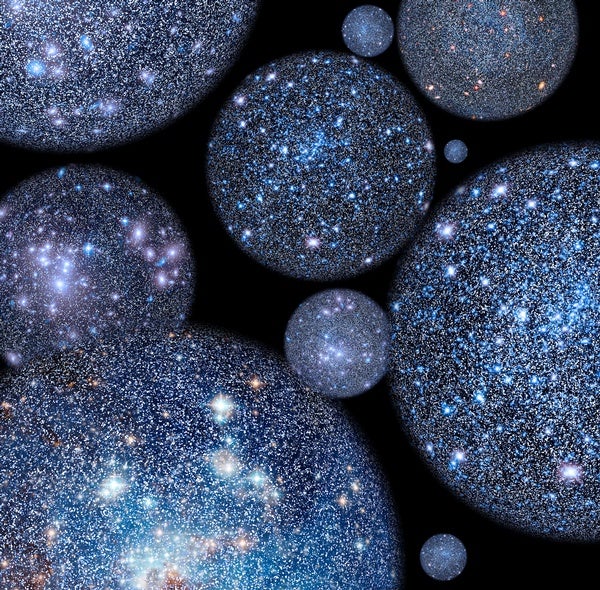 Ernst Mach, the Austrian physicist-philosopher of the late 19th century, famously denied the reality of atoms. “Have you ever seen one?” he mockingly asked of atom advocates. Today many scientists speak with similar derision about the idea that the visible universe is not alone, but rather is only one of many universes—a single bubble in a froth of cosmic carbonation known as the multiverse.

You can’t see these other universes, so the idea is not testable, multiverse opponents allege. Besides, invoking a multiplicity of universes to explain reality is a violent violation of Occam’s razor, the philosophical principle favoring simple explanations over complicated ones.

But Mach, of course, was wrong about atoms. And throughout history, those arguing against multiple universes have invariably turned out to be wrong as well. In fact, the first proponents of the multiverse were the same ancient Greeks who proposed the existence of atoms. Leucippus and Democritus believed that their atomic theory required an infinity of worlds (“world” being synonymous with “universe”). Their later follower, Epicurus of Samos, also professed the reality of multiple worlds. “There are infinite worlds both like and unlike this world of ours,” he averred.

Aristotle, however, argued strongly that logic required one universe only. His view prevailed until 1277, when the bishop of Paris declared that medieval scholars teaching Aristotle’s view would be excommunicated—for denying God’s power to create as many universes as he wanted to. Centuries of debate followed. Some argued that God could create more universes but probably didn’t; others maintained that reality comprised a “plurality of worlds.”

In the 16th century, Copernicus turned the issue on its head. Instead of Aristotle’s universe (Earth in the middle, surrounded by planets affixed to rotating spheres), Copernicus placed the sun in the middle, with the planets (including Earth) in orbit. The universe became a solar system, bounded by a sphere of stars. Shortly thereafter Thomas Digges in England redrew the Copernican picture, with stars littered throughout distant space rather than fixed to a single sphere. That raised the possibility of multiple solar system universes scattered throughout the heavens. Giordano Bruno, perhaps influenced by Digges, proclaimed that God is glorified “not in one, but in countless suns; not in a single earth, a single world, but in a thousand thousand, I say in an infinity of worlds.”

Bruno’s contemporary, the famed astronomer Johannes Kepler, didn’t like that idea. He conceived the universe as the solar system. Similar worlds beyond our sight are not scientific. “If they are not seen,” Kepler declared, “they for this reason are not pertinent to astronomy.” Anything beyond what’s visible, he insisted, “is superfluous metaphysics”—a view strikingly similar to the attitude of many toward the multiverse today.

Kepler was wrong, of course. Later telescopes revealed a multitude of stars at great distances, congregating in a lens-like disk, the Milky Way galaxy (of which the sun was one member). Just as Copernicus showed that the Earth is part of a solar system universe, the solar system became just one of many such “universes” in the Milky Way. Once again, the universe was redefined—no longer a set of spheres surrounding the Earth, or a set of planets orbiting the sun, but now a vast disk of stars surrounded by emptiness.

Except in that emptiness appeared fuzzy blobs, called nebulae. Immanuel Kant and others speculated that those blobs were actually galaxies themselves, just very far away—island universes, to use the term coined in the 1840s by the American astronomer Ormsby MacKnight Mitchel. This new vision of a multiverse also met with ridicule. “No competent thinker” believed in island universes, the astronomy writer Agnes Clerke declared at the end of the 19th century. It was an idea that had withdrawn “into the region of discarded and half-forgotten speculations.”

But once again, the multiverse prevailed. In 1924 Edwin Hubble reported proof that some of those fuzzy nebulae, such as Andromeda, were indeed island universes as grand as the Milky Way. Hubble pioneered today’s current definition of the universe as a vast expanding bubble of spacetime populated by billions and billions of such galaxies.

In the 1980s, a new explanation for how that universe came to be, called inflationary cosmology, revived the multiverse question in a novel way. If the initial big bang launching our universe into existence was followed by a burst of extremely rapid expansion (inflation), that same inflationary event could have recurred in other parts of space. If inflation theory turns out to be correct, our bubble would then be only one of many.

Of course, just because multiverse advocates have been right historically doesn’t mean that they will certainly be right again this time. But multiverse opponents are certainly wrong to say that the multiverse idea is not science because it is not testable. The multiverse is not a theory to be tested, but rather a prediction of other theories that can be tested. Inflationary cosmology has, in fact, already passed many tests, although not yet enough to be definitively established.

For that matter, it’s not necessarily true that other universes are in principle not observable. If another bubble collided with ours, telltale marks might appear in the cosmic background radiation left over from the big bang. Even without such direct evidence, their presence might be inferred by indirect means, just as Einstein demonstrated the existence of atoms in 1905 by analyzing the random motion of particles suspended in liquid.

Today, atoms actually can be “seen,” in images produced by scanning tunneling microscopes. Atoms did not suddenly become real when first imaged, though; they had been legitimate scientific entities for two and a half millennia. Multiple universes have been a topic of philosophical-scientific discussion for just as long.

As for Occam’s razor, you could check with William of Occam himself, the 14th-century philosopher who articulated that principle. In his day, he was the most enthusiastic of the advocates for a multiplicity of worlds.