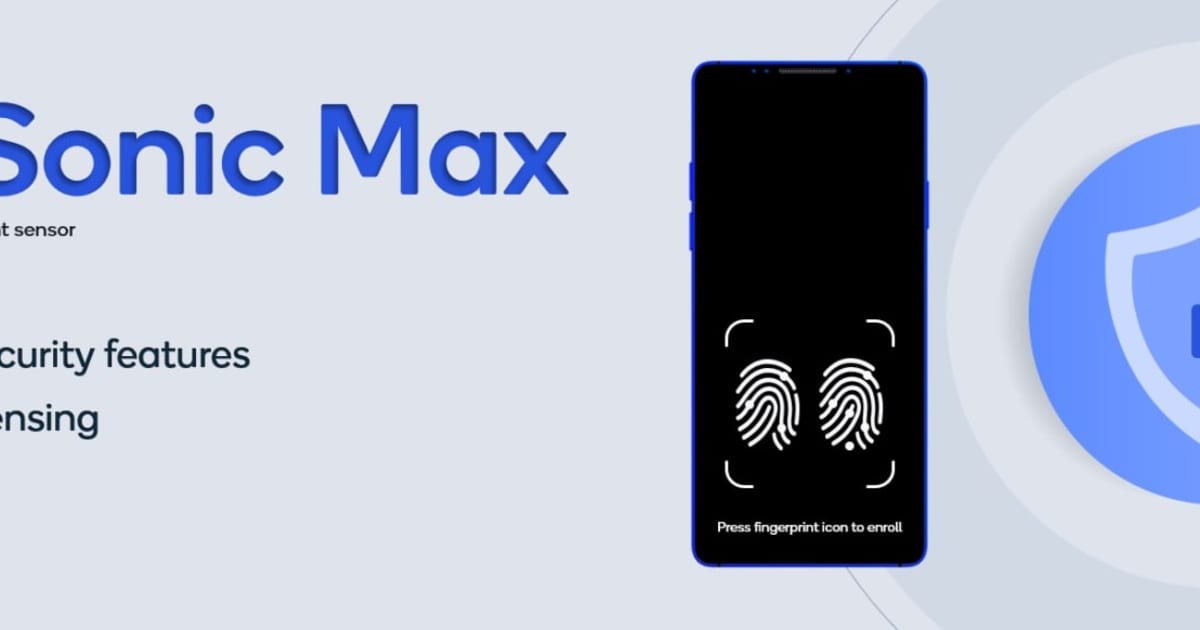 Qualcomm took a different approach from the rest of the smartphone industry last year when it announced its 3D Sonic in-display fingerprint sensor. Instead of relying on an optical image of your finger for authentication, the 3D Sonic system uses ultrasound to get an impression of the surface texture of your prints. That method has a couple of benefits, namely the ability to use the scanner with wet fingers as well as better security over optical sensors. Today, the company is announcing the 3D Sonic Max fingerprint sensor that it says is the world’s largest and is 17 times larger than its predecessor. It’s so big, in fact, that it can authenticate two fingers at once.

That brings about numerous benefits, but most important of these is improved security. Both optical and ultrasound fingerprint readers had a major drawback. Their relatively small size made them far less secure than the larger ones that guard banks and entryways, for example. According to Gordon Thomas, senior director for product management, existing fingerprint sensors for mobile devices (including the existing 3D Sonic) typically measure around 4mm x 9mm. That would only detect part of your finger.

A larger sensor captures more information and looks for more signs to identify you, and is inherently more stringent. For example, if you’re looking at a slice of a pizza, you can generally guess if it’s Hawaiian or meat or vegetarian, but it takes evaluating the entire pie to know for sure. Full fingerprint authentication is simply more secure. “The police would never accept partial prints,” Gordon told Engadget.

The 3D Sonic Max scanner measures 20mm x 30mm for a 600 square millimeter area. This decreases the chances of fooling such a system greatly, and Thomas said the company is aiming for a 1 in a million accuracy rate. That’s the same level of accuracy that Apple claims Face ID has.

That isn’t to say that you’re doomed if you rely on your phone’s fingerprint scanner today. The industry standard for commercial smartphones is 1 in 50,000, which is what Apple says Touch ID offers. While it’s nowhere near acceptable by government standards, it’s generally good enough. But for those of us who are more paranoid about protecting our data, 3D Sonic Max is good news.

Qualcomm is also enabling dual-fingerprint authentication with the larger surface area, which means the system will be looking for two unique prints at the same time. This can be used for situations that require even tighter security, like accessing your bank apps or sensitive company information, for example.

The larger scanner also adds a few other conveniences. For one, you can register your fingerprint on your phone just by tapping once, instead of repeatedly for about 16 to 20 times. With such a large target area, too, you can more easily sign into your device instead of blindly jabbing your finger at a spot where you think the scanner is.

Thomas also said that because Qualcomm built its reader on thin-film-transistor (TFT), which is similar to the material used for LCDs, it’s able to keep costs low and maintain a small footprint. The sensor itself is just 0.15mm thin, so it doesn’t cut into space that would otherwise be devoted to battery or result in a larger phone. 3D Sonic Max will also be able to make out the shape of your finger and look for geometric signs like the distance between the tip of your thumb to the middle of it, and use these as additional layers of identification.

Compared to the last-gen 3D Sonic, the Max carries out its ultrasonic identification (i.e. telling the difference between skin and other materials based on the sound waves) within its hardware, instead of having to rely on algorithms and processing elsewhere on the device. That would theoretically also make it more secure than before by minimizing potential points of vulnerability.

Qualcomm expects the 3D Sonic Max will show up commercially next year. Since Samsung used the 3D Sonic in the Galaxy S10 and Note 10+ flagships, it wouldn’t be surprising if the phone maker adopts this next-gen component in its upcoming phones. For now, we just have to wait for other companies and apps to adopt more-secure methods of ID-ing us. The good news is, the 3D Sonic Max is sure to create some competition in the mobile security space, which should lead to improvements overall.

fingerprint, gadgetry, gadgets, gear, mobile, qualcomm, qualcomm 3d sonic max, security
All products recommended by Engadget are selected by our editorial team, independent of our parent company. Some of our stories include affiliate links. If you buy something through one of these links, we may earn an affiliate commission.