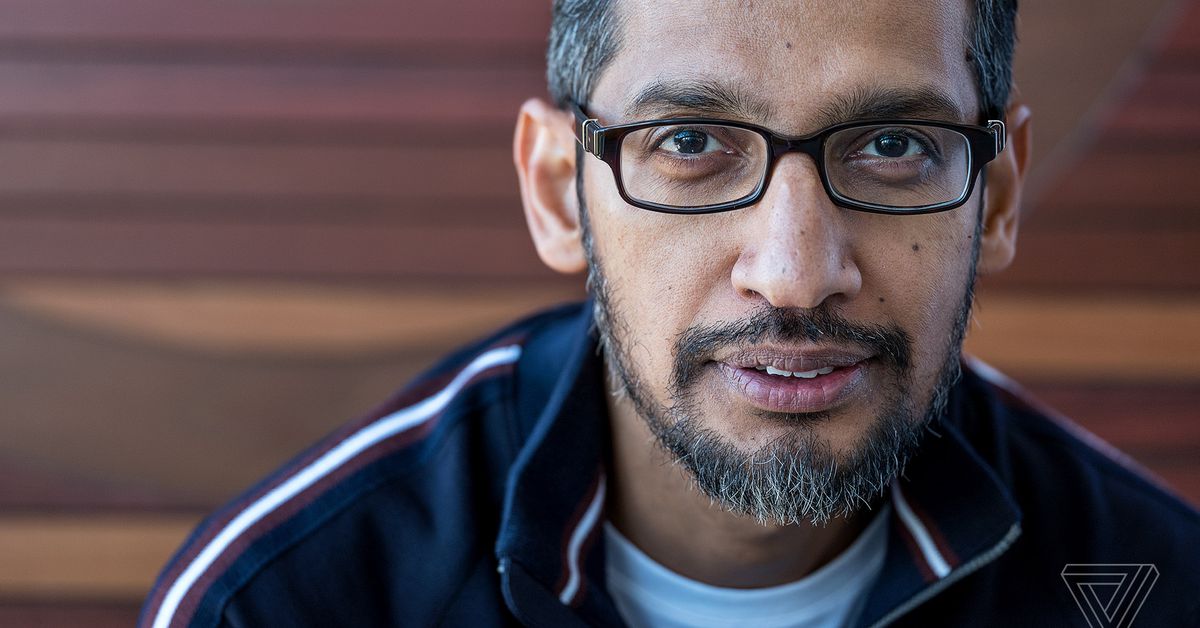 Yesterday’s news that Sundar Pichai is taking on the new role of CEO of Google’s parent company Alphabet was not exactly a “knock you over with a feather” kind of announcement.

In a strictly technical, definitional sense, this is an “era-changing” moment because there’s a new CEO for Alphabet. Larry Page and Sergey Brin, the founders of the company, are stepping back from running things and any time the founders change jobs, it means something. Arriving randomly on a Tuesday afternoon, it felt surprising and big.

But it also felt a little like a non-event, just a formalization of how things have been working anyway. The consensus is that Page hasn’t been doing the necessary, public-facing part of being the CEO of Alphabet and maybe not much of the non-public work, either. So somebody needs to steer Alphabet, and Pichai is the obvious, steady choice.

Google tells me Page and Brin will continue to stay on as Alphabet employees — they’re not going away, they’re just handing over the reins. In their letter, they wrote:

We are deeply committed to Google and Alphabet for the long term, and will remain actively involved as Board members, shareholders and co-founders. In addition, we plan to continue talking with Sundar regularly, especially on topics we’re passionate about.

Their characterization of how they’ll be “actively involved as Board members, shareholders and co-founders” is a vital part of the story. As Kara Swisher has repeatedly pointed out, they retain special, company-controlling shares of stock. It gives them leverage over not just Pichai but also the board itself. So the circle you have to square is that the co-founders have near-absolute power to do whatever they want with the company — and that they apparently haven’t been doing much.

Command Line is The Verge’s daily newsletter about computers, gadgets, and software. You should subscribe! I’m eager to hear your feedback. Please feel free to email me at dieter@theverge.com if you have thoughts. -Dieter

By subscribing, you are agreeing to receive a daily newsletter from The Verge that highlights top stories of the day, as well as occasional messages from sponsors and / or partners of The Verge.

Those aren’t strictly contradictory ideas, but instead weirdly orthogonal ones: Pichai is in charge, but he doesn’t have ultimate power. Page and Brin are not in charge, but they control the company. It’s a situation as convoluted as the corporate structure of Alphabet itself.

Alphabet was formed in 2015 as a weird holding company for Google, designed in part to distance Page and Brin’s various pet projects from Google’s core business. That’s when Pichai was put in charge of Google as the CEO. Since then, I think Pichai’s tenure has been marked by a few major stories that are really the same story: he has spent a significant chunk of his time cleaning up the messes that resulted from Google’s culture up to that point.

Pichai’s rise through Google’s ranks was well deserved because he has calmly and consistently delivered good products. From the very first Google Toolbar to Chrome to Google’s online apps to ordering its scattered hardware efforts, he steadily took on more of Google’s user-facing products until, eventually, he took on the job of CEO.

All of the stuff Google made was innovative and smart but also directionless and unpolished. Pichai’s job was to take Google’s products out of permanent beta. At the same time, he’s had to ensure future technologies — especially those based on AI — turned into real products. From a purely product perspective, which of course includes the lucrative ad products that make the whole thing go, Pichai has been very successful.

Pichai is not a corporate suit — Google is still Google and will still toss out weird ideas and still do weird stuff to the web and Android all the time — but there’s a sense of direction in the past few years that was lacking before.

These distinctions are necessarily arbitrary, but I find it useful to split Google into three distinct eras. The first is the early startup days from the Stanford dorm room up until Eric Schmidt’s “adult supervision” led Google to IPO and to buy YouTube and DoubleClick — roughly 1996 to 2007. Next is Google’s monumental growth across mobile, ads, the web, and everything else you can think of — roughly 2007 to 2015.

I see the founding of Alphabet in 2015 as an explicit attempt to start Google’s third era. But what it really was was a midlife crisis. Splitting off experimental divisions into separate companies inside an umbrella corporation might have made sense in theory, but in practice everybody knew the truth: it was all Google and so-called “other bets” on the side.

It didn’t really start the new era, is what I’m saying. But now that Pichai is running Alphabet officially alongside (above? contiguous with?) Google, he can do the same product cleanup work for the Alphabet companies.

That is, if Page and Brin will let him. They did promise to “continue talking with Sundar regularly, especially on topics we’re passionate about.” It’s something to watch out for in the future, but it’s also not the most important job Pichai has right now.

His most important job lies within Google still, and it’s not just cleaning up the effects of Google’s culture on its products. Instead, it’s stabilizing the culture itself. After that, it’s navigating the new world of regulation, antitrust, the techlash, and well-justified privacy concerns from its users (aka everybody who goes online).

Google’s internal culture is changing rapidly, and the list of how employees are beginning to lose faith is not short. There’s the James Damore mess, the Google Walkout that followed the revelation of Andy Rubin’s payouts, the scaled-back TGIF all hands meetings, and most recently the accusations of employee retaliation — just to name a few big moments off the top of my head.

Only so many of those scandals can be laid at the feet of Google’s previous management. If I could only pick one major failure of Pichai’s now four-year-old tenure as CEO, it would be the inadequate and increasingly antagonistic way the company is interacting with its most politically active employees.

And external pressures on Google are just as difficult to navigate: at some point the US federal government will get its act together and enact more tech regulations — or even antitrust actions. The EU is already there on both fronts with the GDPR and the new rules about Android.

If the first era of Google was developing the technology, and the second era was growing to a massive scale, the third era is contending with the effects of that scale.

That reckoning isn’t happening because the founders formalized their already reduced roles by handing over the CEO title. It’s happening because both internally and externally, we don’t know how to deal with a company as big and powerful as Google. We just know that Page and Brin aren’t the ones to figure that out anymore.

The third era of Google was already here and has been for some time — yesterday’s CEO announcement just made it official.

More from The Verge

Verge Deal of the day

It’s getting tougher to find good deals on tech, what with Black Friday and Cyber Monday being over — that is, unless you’re looking for discounts on mesh Wi-Fi systems. Google’s Nest Wifi and Amazon’s eero system can blanket your whole home in reliable Wi-Fi signal, and you can save quite a bit of money right now.

Adi Robertson has written an important piece here — and the design on our site is also really good. Don’t miss her appearance on The Vergecast or her Twitter thread. One thing I keep thinking about is how this is a useful guide for people who are sincere in their desire to find the truth (or something like it) online — but what if fewer people want that than ever?

You should think about how you’ll share some of these insights with your friends and relatives who have fallen prey to misinformation and clickbait. I would caution against just sending them the link. Instead, pick and choose a few of these tactics and talk with them about those specific things. Start small.

Promised you yesterday this would be good and here it is: it is good. Read it all!

+ The rise and fall of the PlayStation supercomputers

I want to call out this piece by Mary Beth Griggs specifically, because it is a wonderful snapshot of a real thing that happened in computer history that turned out to be a fluke, but a really fascinating one.

Jokes about Google’s umpteenth messaging app aside (it’s hard to set the jokes aside, believe me I know), this looks like a good and needed feature. Sharing photos in Google Photos involved a lot of teaching people about how obfuscated URLs work and while I stan the web forever, it was just too complicated.

+ Congress is split over your right to sue Facebook

Excellent look at this issue from Makena Kelly:

Republicans and Democrats disagree on other issues like nullifying state privacy laws and empowering the FTC, but tomorrow’s [well, now it’s today’s — Dieter] hearing could focus heavily on a private right of action. “We can pass any laws we want,” Waldman said. “But if there’s no way to enforce them, then what’s the point?”

Do not be a hater about this. Ahmed Best is good and so are kids competition shows.

Qualcomm is doing its annual junket in Hawaii to announce its new products. We attended (and paid our own way, of course) last year, but didn’t make it this year. There is a lot of 5G chatter, obviously, and all that 5G feels much more real that I would have expected a year ago. But all of this has the flavor of iteration, if I’m honest, even though that’s not entirely a fair assessment. Will be interesting to see what gets announced today — the event is ongoing.

Good, and overdue. I guess now that all the top engineers are done with the RAZR they can cycle back to making top tier phones again?