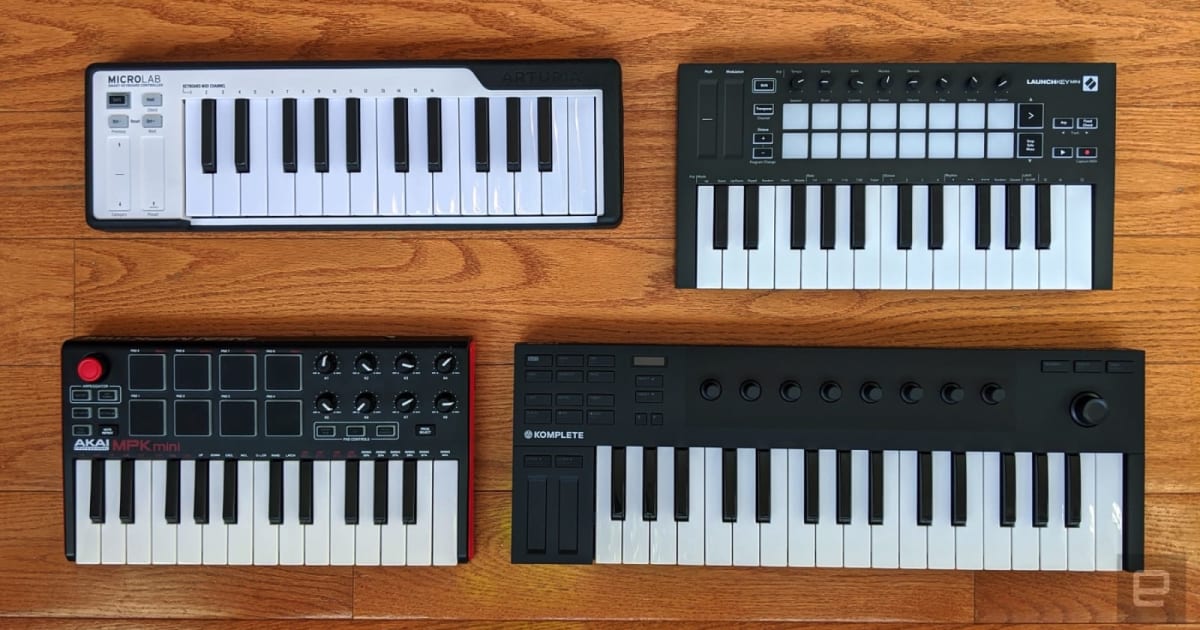 Whether you’re a musician always on the go or just tight on space, there are plenty of reasons to pick up a portable MIDI controller.

I’ve been on the hunt for the perfect portable and affordable controller. (You don’t want to lose or break something expensive while you’re traveling, after all.) But honestly, there is no perfect controller. There are some very good ones out there, but none has ticked every box for me. Similarly, you’ll need to figure out which one best addresses your specific needs, with the fewest trade-offs. None of these controllers rises head and shoulders above the rest to make it the clear winner. So I’ve laid out the strengths and weaknesses of what I think are the five best options currently on the market.

But before we get to the nitty-gritty, let’s be clear about what we’re looking at here. For one, we’re only considering keyboard-style controllers. While pads are a bonus, we’ll be ignoring pad-only controllers like the Novation Launchpad. (They’re a different beast.) We’re also focused on USB-MIDI controllers. My reasoning: I assume most of you are working with a computer to some extent anyway, especially while traveling. So while having other connections is nice, it’s not essential. But not having USB is a dealbreaker.

If you’ve watched any synth videos on YouTube, you’ve most likely seen an Arturia KeyStep. We sang its praises here on Engadget. Its keyboard feels worthy of a device two or three times the price. Plus it has a built-in arpeggiator, a sequencer and more connectivity options than you could possibly imagine. Basically, if there’s a piece of gear out there, the KeyStep can probably control it without the need for a middleman. It’s reasonably priced too, at only $129.

But the KeyStep has a major drawback: It weighs a ton. All right, it only weighs three pounds, but that’s still a lot, relatively speaking. The only other keyboard I considered including that weighs more is the much loved Arturia MiniLab, which comes in at 3.3 pounds. But frankly, it’s not nearly small or light enough to carry around comfortably. The KeyStep is also the longest controller I looked at. At 19 inches it’s quite hard to stuff into most backpacks. Unless you absolutely need the CV and MIDI ports and don’t plan to drag it with you often, you’re probably better off looking at Arturia’s newest offering, the MicroLab.

The MicroLab has the same keybed as the KeyStep and MiniLab — which is to say, by far my favorite keybed of the bunch. It also weighs less than two pounds, and while it’s larger than a lot of the competition at about 16.5 inches long, it still fits in most bags meant for 15-inch laptops. But what makes the MicroLab special is the thoughtful design. There’s a thin rubber case around the whole thing that should help protect it against light bumps. It also doubles as a holster for the cable, which wraps securely around the keyboard so it’s not floating around your bag. Oh, and that cord sits flush with the side of the controller, so you don’t have to worry about it getting in the way of your other gear.

The MicroLab is pretty bare bones though. There’s no sustain pedal input, no arpeggiator, no knobs, no pads or transport controls, and only USB for connectivity. But it’s the cheapest keyboard on this list at $89, and it comes with a top-notch software bundle, including Arturia’s Analog Lab Lite and Bitwig Studio 8-Track. If you just want to be able to play the keys wherever you go and don’t need a ton of bells and whistles, the MicroLab is probably your best bet.

Native Instruments’ (NI) controllers are the only ones that are even in the same league as Arturia’s when it comes to the quality of the keybed. Earlier this year the company launched its most portable model yet, the Komplete Kontrol M32. It’s the most expensive of the lot at $139, but it’s also the most solidly built (save for the KeyStep). It feels like something that belongs in a professional studio. The buttons have a satisfying click, and the eight touch-sensitive knobs are by far the best on any controller in this roundup. And the navigation encoder is satisfyingly clicky. If your primary concern is the quality of the keyboard but the MicroLab is too minimal for you, the M32 is worth considering.

However, there are some drawbacks. For one, like the KeyStep, it’s barely portable. At 18.7 inches long and 2.3 pounds it’s among the larger and heavier controllers I considered. It simply doesn’t fit in my backpack, which is designed to hold a 15.6-inch laptop. It also gave me the most trouble during setup. In fact, it didn’t work with my Windows 10 PC out of the box and required a firmware update. Getting the transport controls to work with Ableton also took quite a bit of troubleshooting. But it does integrate seamlessly with NI’s excellent Komplete Kontrol software. In fact, basically all of Native Instrument’s software is pretty great. Massive, Kontakt and Reactor are industry standards, used by countless professionals. So if you want a controller built with those tools in mind, M32 is your best bet.

The one thing the M32 lacks, though, are pads. If those are a must-have for you, the Akai MPK Mini MkII should be near the top of your short list. It’s been my controller of choice for the past several years thanks to its best-in-class pads, built-in arpeggiator and a decent selection of controls. It has eight knobs and eight pads (the latter of which are basically ripped straight from the company’s beloved MPC series), a sustain pedal port, note repeat and a dedicated, customizable MIDI CC mapping mode for the pads. That last part helps make up for the fact that there are no transport controls to be found on the MPK.

The joystick is also a unique and fun way to control pitch bends and modulation effects. It’s not quite as reliable as dedicated pitch and mod wheels, but it’s still fun to use. The biggest drawback to the MPK, though, is build quality. While the pads are second to none, the keybed and knobs are flimsy feeling and unsatisfying. They get the job done, but you’re never going to mistake it for a premium piece of music-making gear.

One quick note: Do not confuse the MPK Mini MkII with the MPK Mini Play. The Play has a speaker and built-in sounds and can be powered by AA batteries. You might think this sounds like a clear winner. But in reality it sounds like a busted Super Nintendo (and I don’t mean that in a fun chiptune way). Almost all the “instruments” in the Mini Play are useless, and it sacrifices four control knobs to add an interface for browsing them. Skip it.

If you want all the controls that the M32 and MPK Mini offer and better DAW integration, consider the Launchkey Mini Mk3 from Novation. Frankly, this is probably the controller I’ll be carrying around most often from now on. But that’s almost entirely down to one thing: its seamless integration with my DAW of choice, Ableton Live. In addition to being able to trigger scenes and clips, there are handy shortcuts for controlling most of Live’s interface right from the Launchkey. The front panel has eight knobs, 16 pads and a robust selection of transport controls. Plus you get a decent software bundle. It even has a TRS-MIDI jack, in case you want to use it to control hardware synths. (That said, you might need a five-pin MIDI adapter to connect to older gear.)

The Launchkey has also stolen the arpeggiator crown from the MPK Mini. It offers a host of advanced controls that allow you to manipulate the rhythm and gate, plus unique features called “mutate” and “deviate” that introduce controlled bursts of randomization to tweak your pattern.

But as I warned at the top of this story, there is no perfect controller. The Launchkey feels slightly more sturdy than the MPK, but not much. Its keyboard is the least satisfying to play. And while its knobs have a pleasing amount of resistance, they’re awkwardly small. Plus, the pads here are much better suited to triggering clips in Ableton than finger drumming.