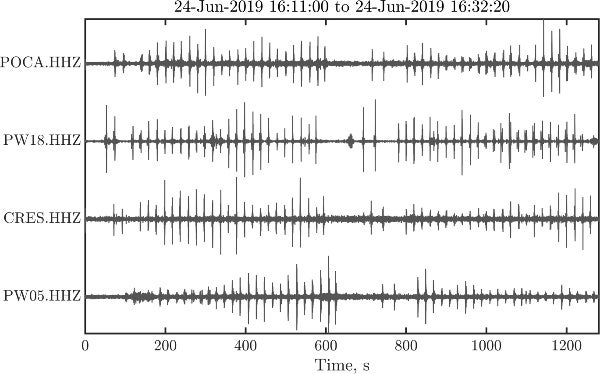 It started as so many things do in our world today: with a tweet.

In July, a colleague in Norway messaged me over Twitter about mysterious signals in Oklahoma that more than a hundred seismometers had recorded earlier in the summer, and which had been described in Oklahoma Geological Survey’s field blog. Scientists were stumped, and my Norwegian colleague Steven Gibbons wondered if I had the answer, given that I study seismic signals for explosion monitoring.

I didn’t. I, too, was stumped. In fact, that’s exactly what I tweeted back.

But who doesn’t love a good mystery? So I got to work.

When the ground moves, it pushes—compresses—in one direction and pulls—tenses—in another. This pushing motion causes body waves, which first shake the ground after a seismic event, like an earthquake or explosion. Other waveforms, called surface waves, arrive somewhat later. These cause the ground to roll, just like the surface of the ocean. They move more slowly than body waves, but more dramatically because they interface with both the ground and the air.

We did not see surface waves in these signals in Oklahoma, so we knew it wasn’t an earthquake—but not much more than that.

My initial suspicion, along with other researchers who saw the signals, was that they were telemetry spikes in the seismometers—voltage changes that can be caused by anything from a lightning strike to a power surge. But electronic signals move at the speed of light, meaning they would be measured at every seismic station virtually simultaneously. These signals traveled much more slowly—moving at close to the speed of sound through the air, in a ping-pong pattern from station to station.

My next question was: are they natural? Migrating animals—even something as seemingly unlikely as a swarm of locusts—can sometimes trigger seismic signals. But then I saw that each signal was separated by a 20-second delay. Nature is rarely that regular.

So I ruled out natural causes. But I also ruled out typical human-made causes, such as a mining or drilling explosion. Those signals also don’t pulse like the Oklahoma signals did. Could something airborne have caused them, such as an aircraft or blimp? When I reviewed the data in the original blog post, I saw that they were looking at seismic signals, but not acoustic ones in the air. Acoustic data resources are more difficult to find. They often originate from infrasound sensors—and in Oklahoma, there are only four.

Still, I wanted to see what they said. So I accessed data from those sensors and also looked at acoustic data recorded by the seismic stations (called seismo-acoustic signals). From these I learned that the pulse sequences were not as strong in the air as they were on the ground. That ruled out an airborne cause.

Next, I analyzed data from a huge refinery explosion in Pennsylvania in June—so powerful National Weather Service satellites detected the heat of the fireball. But what interested me were the acoustic waves created by the blast. Were they bigger or smaller than the seismic ones?

Industrial noise, such as that produced by wind farms, can generate acoustic motion through the air and seismic motion through the ground. But the location of Oklahoma’s wind farms and the transient nature of the mysterious signals were evidence that the signals didn’t originate at a wind farm. Those farms create a continuous humming signal in the ground, not a short-lived, repeating signal like those recorded by Oklahoma’s seismometers.

This, plus the absence of observed surface (rolling) waves, told me that a near-ground explosion was likely. This spurred me to look at facilities nearby that could be creating them.

One of them caught my eye: the Army Ammunition Plant, in McAlester, Oklahoma. Could the plant be destroying old ammunition by detonating it? As the Magic-8 Ball sometimes tells us, “signs point to yes.”

And in this case, the Magic 8-Ball would have been correct. I requested records from McAlester and confirmed that they were indeed detonating old ammunitions in a timed sequence. While McAlester regularly disposes of munitions throughout the year, the sensors were picking up seismo-acoustic signals mostly in the summer. That’s because summer winds in the northern hemisphere travel east to west—and the sensors in the region are predominantly located west of McAlester. In addition, air temperature impacts how signals move: warmer air is more conducive to bending signals in the air back towards the seismometers on the ground.

But looking at signals such as these is about more than satisfying my inner Scooby Doo. As someone who analyzes unknown seismo-acoustic signals all over the world to monitor for natural and human-made explosions, understanding how signals behave and tracking them back to their source is critical to that effort. Almost all of the hundreds of thousands of signals recorded each year on sensors worldwide are innocuous. My job is to ensure that we can quickly dismiss that mass of false alarms from the very few geophysical signals that concern us, such as those from treaty-violating underground nuclear explosions. So, while solving this mystery might seem like a scientific whodunit of no real consequence, knowing which signals to ignore—and which to pay close attention to—can actually help keep the world safer.