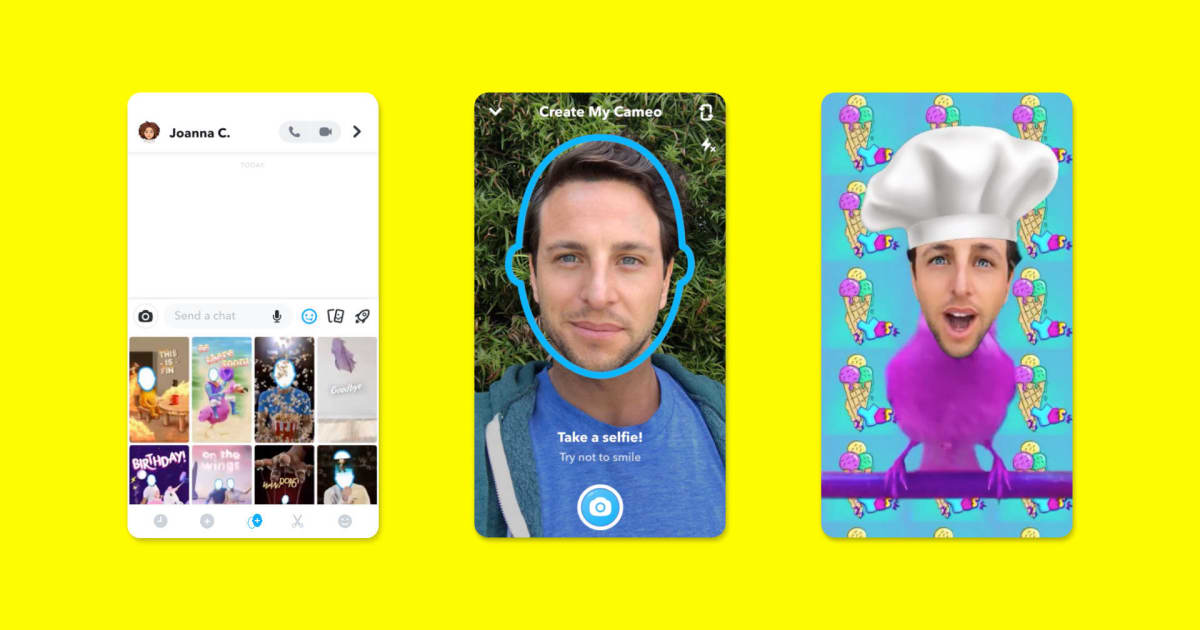 Snapchat’s secret weapon is its uncanny face-swapping and -tracking algorithms, and it has just deployed those to great effect in a new chat feature called Cameos. The feature, which leaked out yesterday, inserts your selfie into short, looping videos featuring cats, shopping carts, cars and more. The idea is to send your pals an expressive GIF, starring… you.

If that sounds a touch creepy, well, you’re not wrong. According to a GIF that Snap supplied (above), you can appear as an anthropomorphized cat, someone riding a shopping cart, a giant animated “thumbs down” emoji and more. You can add your own message and, as you’d expect, Snapchat will also create facial expressions, mouth movements and more.

If your friend is also set up for Cameos, you can include them in the fun as well. All you need to do is open Chat, tap the emoji button, hit the Cameos icon, tap on a tile and take a selfie. Then, you’ll get the option to choose whether you’d like to enable two person cameos. You can send that Cameo to someone else via chat using the same controls.

While a touch disturbing, the feature has high comedic potential and could help Snapchat stay ahead of Instagram and other rivals, at least until they figure out how to copy it. Cameos is rolling out on December 18th to iOS and Android with 150 Cameos, giving you plenty of options for, er, self-expression.

Cameos, Chat, face-swapping, face-tracking, gear, lens, Memes, mobile, Snap, Snapchat, sticker
All products recommended by Engadget are selected by our editorial team, independent of our parent company. Some of our stories include affiliate links. If you buy something through one of these links, we may earn an affiliate commission.