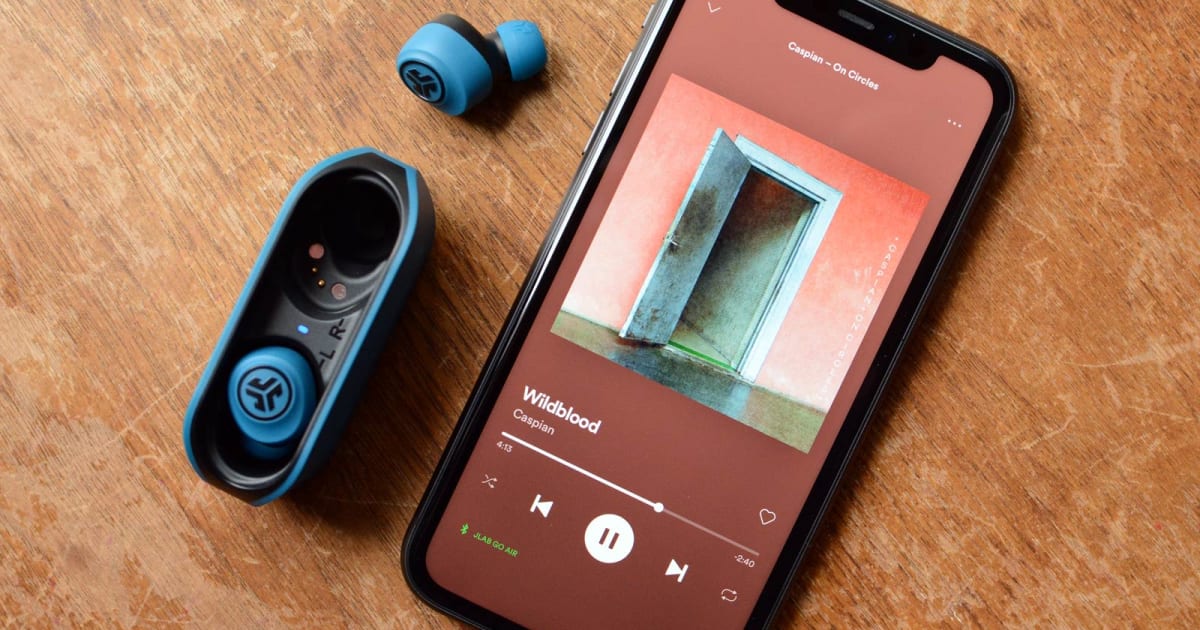 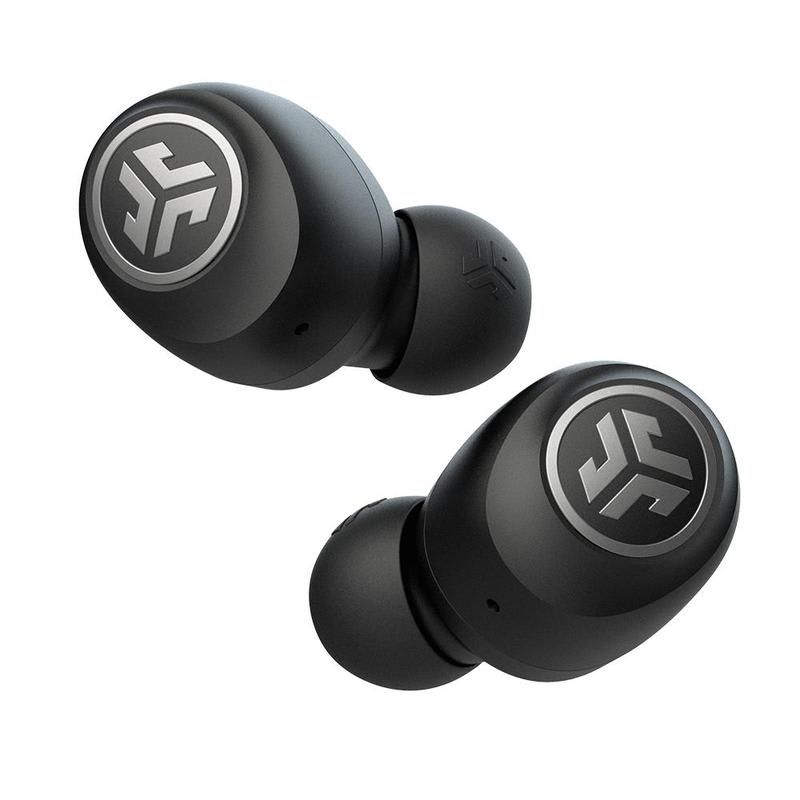 For better or worse, we assign quality to things based on how much they cost. If the best true wireless earbuds you can buy are $230, surely an alternative priced under $30 isn’t worth your time, right? Wrong. While it may have been true in the past that cheap true wireless earbuds weren’t as reliable as their pricier competitors, that’s not the case in 2020. JLab Audio’s Go Air ($29) are serviceable regardless of price — so much so that they might change your mind on cheap audio accessories.

JLab’s Go Air is impressively cheap at $29, but you’ll have to sacrifice audio quality to save a big chunk of change. The company included a lot of handy features we typically see on pricier models — like easy-to-use touch controls and spoken battery levels. If you’re mostly using earbuds for podcasts or audiobooks, these will serve you well. But if you need something that sounds good, you’ll want to invest a little more.

Be the first to review the Go Air?
Your ratings help us make the buyer’s guide better for everyone.

The first thing you notice about the Go Air is the open case. There’s no lid, so the charging case is more of a holding tray. You don’t have to worry about an earbud slipping free in your bag, though. I was only able to knock one loose with a violent shake of the case — similar to how you’d shake a ketchup bottle to get the last remaining bits at the bottom. The magnets are strong enough to keep the earbuds in place in your pocket or backpack, which ensures they’ll be charged when you need them. The case for the Go Air also includes an attached USB-A cable that tucks into the bottom. Probably not a decisive detail that’ll swing your buying decision, but it’s a nice touch not having to look for a cable. Of course, you’ll still need a plug, unless you’re toting around a laptop with those old-school USB ports.

The case also offers an LED indicator that lets you know its battery status. A solid green light means the earbuds are between 25 and 100 percent. That’s quite the range, but it’s better than nothing. A blinking red light means the case has less than 25 percent left. When the case is plugged in, red shows when it’s charging, and the light changes to green when that’s complete. Lastly, a blue light pulses when the earbuds are charging, and it goes off when that process is complete. These indicators don’t show you a granular level of detail, but they do help. Given that some companies forgo them entirely — even on pricier models — it’s nice to see JLab include them here.

The earbuds themselves are very small. In fact, they’re smaller than even the tiniest models I’ve tested: Jabra’s Elite 75t, Plantronics’ BackBeat Pro 5100 and Samsung’s Galaxy Buds. The compact build not only makes them more comfy, but it also means they don’t stick out from your ears like many rival devices. I found it easy to wear the Go Air for hours at a time, mostly because they’re tiny and lightweight.

The company didn’t nix touch controls on this low-cost model either. Functionality is split across the two earbuds, which in my experience is the least frustrating way of organizing things. A single tap on the right earbud increases the volume, while doing the same on the left decreases it. Double tap on the right to play/pause and do the same on the left to summon your voice assistant of choice. When you need to skip tracks, press and hold on the right to move ahead; do the same on the left to go back. The one key feature JLab didn’t include was automatic pausing when you remove an earbud from your ear. That might not sway your buying decision, but it’s a nice thing to have when you need it. It’s one of those things you don’t realize you’ll miss until it’s not there.

The Go Air doesn’t have any EQ customization, but there are three presets to choose from: balanced (no adjustment), bass boost and JLab signature (amplified bass and vocals). You can cycle through those by triple tapping on either earbud. I found the signature setting sounded best most often, but the other two options were better suited for some genres.

Overall, the sound quality on the Go Air is mediocre. I didn’t expect to be wowed by a $29 set of earbuds, but they’re probably just fine for some people. More specifically, the sound is compressed and thin. Even with the best of the audio presets, there was a lack of depth to almost all the music I tried. Despite some decent bass, there’s too much treble and not enough mid-range tone. I’d argue even the bass is high-pitched unless you’re using the bass boosting setting. Bass boost also provides a little space for the music to work, but it still sounded compressed compared to most other true wireless earbuds I’ve tested.

Across genres, the results are mixed. Bands like Caspian and The Appleseed Cast that create big, open and airy soundscapes clearly highlight the Go Air’s compression issues. Those acts are skilled at building layered songs that seem to envelope you with each instrument. With these earbuds, that’s all flat — especially the drums. Metal and hardcore acts like Gojira and Oh, Sleeper fare slightly better. The sound you get from JLab’s signature setting is big and boomy, but not as much as it would be otherwise. Unsurprisingly, hip-hop sounds best with the bass boost preset. KAYTRANADA’s BUBBA has some good thump, but there’s little mid-range and some of the finer details get lost.

If you’re a podcast junkie who rarely listens to music on the go, the Go Air will allow you to cut the earbud tether with what you’d spend on a couple of cocktails after work. Podcasts sound just fine on these as the audio shortcomings aren’t as obvious. They’re still far from perfect, but if you primarily consume spoken content, you could save a lot of money with a $29 device. However, if you want an all-around set well-suited for both music and podcasts, you’ll want to look elsewhere.

In terms of battery life, JLab promises five hours on a charge, which is on the low end for true wireless earbuds these days. Much of the competition is in the 10-hour range now. But again, five hours shouldn’t be a dealbreaker on a budget set like the Go Air. It’s still enough to get you through a good chunk of the day and the included case holds three full charges. What’s more, a quick-charge feature will give you an hour of playback in 15 minutes. These earbuds also give you a battery update when you turn them on. It’s a vague “full,” “medium” or “low,” but it’s still handy, as it gives you a ballpark idea of how much battery you have left.

I’ll admit I’m not well-versed in the sub-$50 true wireless earbud market. The closest I’ve come is Audio-Technica’s ATH-CK3TW. But at $119, they’re over twice the cost of the Go Air, and they have flaws of their own. JLab has piqued my interest, though, and you can expect to read more about sub-$100 and even sub-$50 earbuds on Engadget from now on. If you’re considering the Go Air, they’re scheduled to go on sale in March.

While the Go Air isn’t a game-changer, it did exceed my expectations in terms of experience. These earbuds are easy to use and offer several handy features that more expensive models sometimes omit. The touch controls are well-organized and reliable, which keeps frustration to a minimum. Kudos to JLab for making volume changes as quick and painless as possible. In the end, the Go Air is serviceable. But if you need a well-rounded seat of earbuds that can handle both your music and podcast libraries, you’ll want to consider some alternatives — even if that means a bigger investment.

audio, earbuds, gadgetry, gadgets, gear, go air, jlab, jlab audio, review, thebuyersguide, true wireless, true wireless earbuds, wearables
All products recommended by Engadget are selected by our editorial team, independent of our parent company. Some of our stories include affiliate links. If you buy something through one of these links, we may earn an affiliate commission.