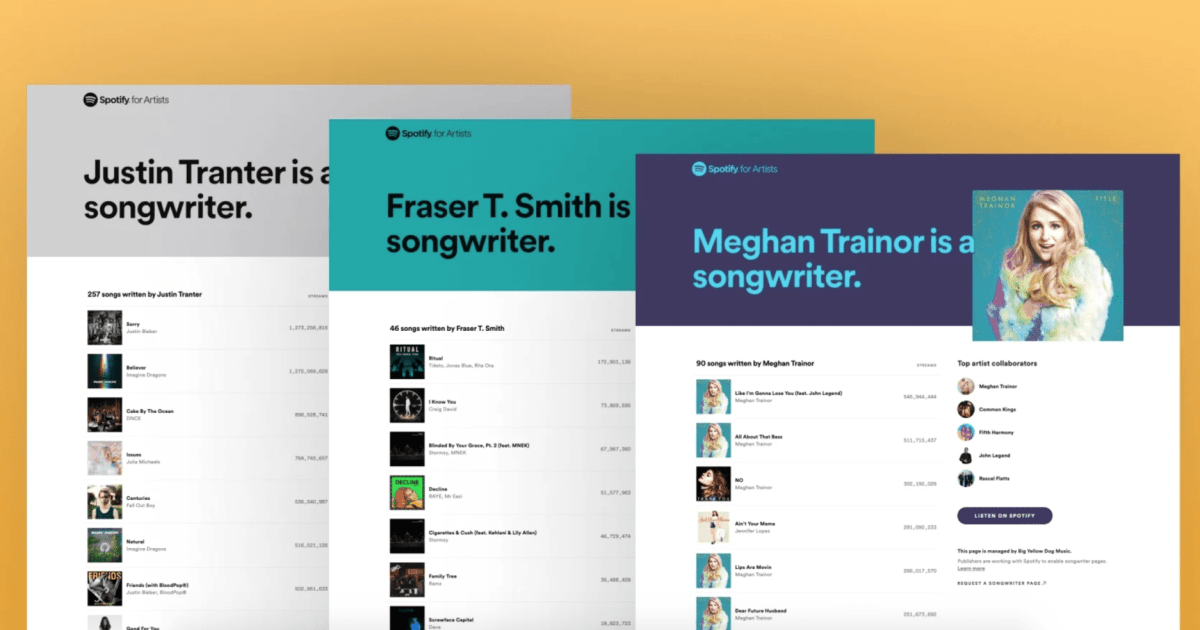 Spotify hasn’t been very proactive about crediting the artists and personnel behind the music it hosts. The streaming platform didn’t display credits at all until 2018, and even then, the information was often incomplete. This can be frustrating for users who want to learn more about the people who created their favorite tracks and insulting to artists, producers and engineers. The company’s latest effort — called songwriter pages — uses metadata to compile a list of songs that an artist has written and the musicians who the songwriter has frequently collaborated with, helping the user to discover more music they may enjoy.

The feature is currently in beta, so only some artists have songwriter pages. Usability is rough, too — clicking on a songwriter page brings you to a website, rather than showcasing the information within the app. But as Spotify fleshes this out, it could become a valuable tool for more musicians and a way for fans to dig deeper into the music they love. Spotify says that industry professionals frequently comb through the platform’s credits, implying that they’re searching for new talent. Songwriter pages could help relatively unknown musicians increase their visibility — and hopefully their chances of being discovered, as well.

Spotify rival Tidal launched a similar feature last year. While the data is often incomplete, the platform’s song credits are more interactive than Spotify’s, allowing users to sort songs by popularity, title, release date and more. However, it feels like both platforms could be getting ahead of themselves. Providing images of an album’s liner notes seems like it would have been a solid first step. This would be an easy way to make sure every song is accompanied by a full list of credits, as opposed to the current state of both Spotify and Tidal, which are missing large amounts of data.

Source:
Spotify
In this article:

av, entertainment, music, music streaming, services, spotify, spotify songwriter pages
All products recommended by Engadget are selected by our editorial team, independent of our parent company. Some of our stories include affiliate links. If you buy something through one of these links, we may earn an affiliate commission.