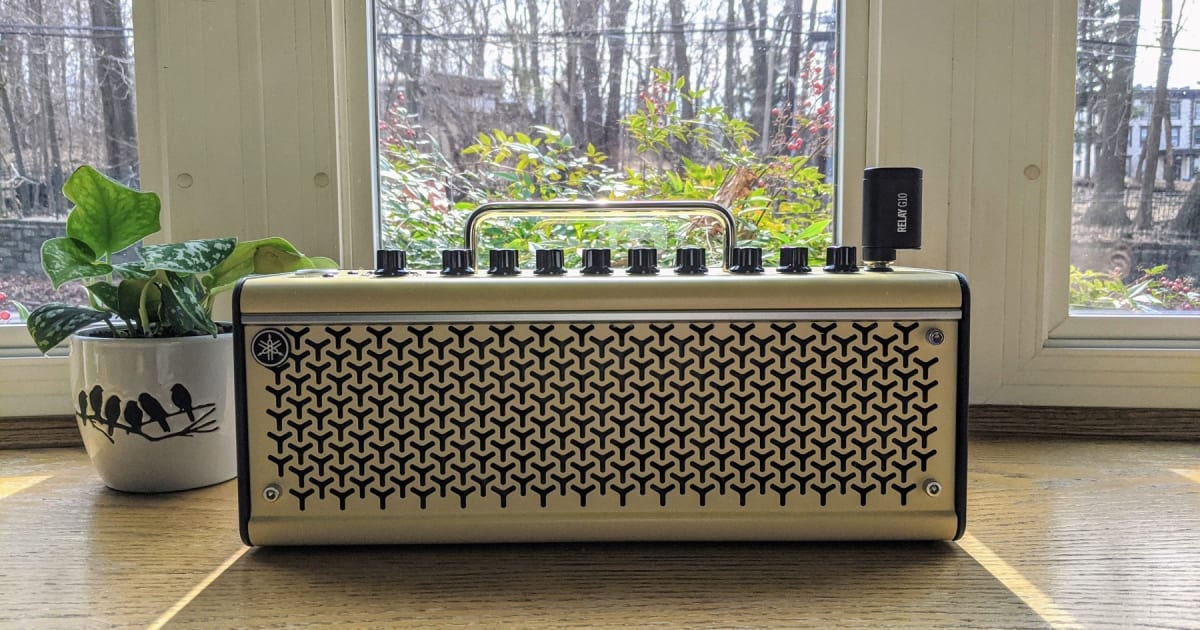 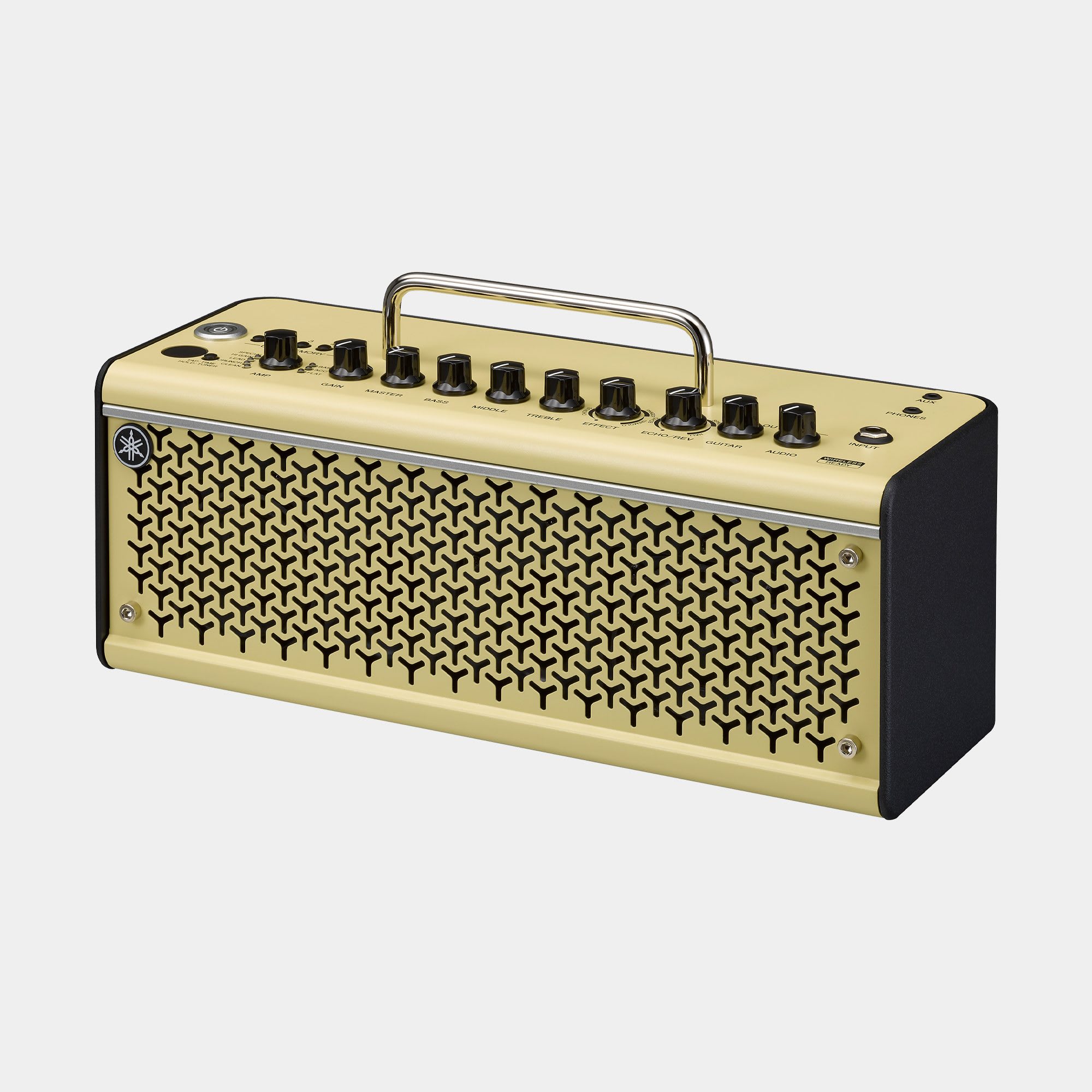 With the original THR line of guitar amps, Yamaha basically invented a new product category: the connected desktop amplifier. It filled a need that honestly many guitar players didn’t even realize they had. These amplifiers are small enough to sit on a table or desk, they sound great even at low volumes and they’re stylish enough that you won’t feel compelled to hide them when company comes over. You don’t have to search long or hard to find people singing their praises. I bought one a couple years ago and have zero regrets.

But the THR amps weren’t without flaws. And in the nine years since they were introduced, the competition has caught up. The highly revered Roland Katana line made a play for the space with the Air. And the iconic Vox brand introduced Adio. So Yamaha announced the THR II in September with new features, new amp models and a rich new app in the hopes of not only keeping pace but also showing the competition it’s still the benchmark for tiny amps.

The THR10 II Wireless shows that Yamaha is still a pioneer in the desktop-guitar-amp space. It sounds amazing even at low volumes. Unfortunately, many of its more unique features are reserved for the pricey $450 wireless model. And you’ll need to buy a separate $100 wireless adapter to make the most of it.

Be the first to review the THR10 II Wireless?
Your ratings help us make the buyer’s guide better for everyone.

The THR remains the undisputed king of looks. Part of its allure is the retro styling that’s more reminiscent of a piece of stereo equipment than a guitar amp. The outside is a matte, cream-colored metal with a Y pattern punched out. (I’ll admit I much prefer the herringbone of the original THR.) The knobs and chrome handle on top also lean into the old-school vibe. And the kicker: The amp gives off a gentle, orange glow when powered on, similar to a tube amp’s.

Of course, there are no actual tubes here. The whole thing is digital, but the THR series does its best to capture the sound and feel of popular tube amplifiers. Yamaha won’t name names, but it seems safe to say that the Clean, Crunch and Lead channels on both the original and the new models are inspired by a Fender Twin Reverb, a Vox AC30 and a Marshall Plexi, respectively. However, the last two models available on the front panel are pretty different. The original THR has Brit Hi (Marshall JCM800, maybe?) and Modern (almost certainly Mesa Boogie Dual Rectifier). The THR II has HiGain and Special, and honestly I’m not 100 percent sure what they’re supposed to be. HiGain might be another attempt at a Mesa tone, but Special — well, I’m kinda lost. It’s another high-gain sound, but it doesn’t feel quite as high as HiGain. (Author’s note: Hi! 👋)

All the amp emulations have been tweaked for the new version, mostly for the better. The Clean and Lead options are pretty close in terms of overall quality. But because the new model is actually a 20-watt amp instead of 10 (despite the name), there’s additional headroom, which means it takes effect pedals better, especially loop pedals. Those always introduced some unwanted distortion in the THR, but it now stays much cleaner at higher volumes. I do find the new Clean model a little more nasal than the original, but some people might prefer its pronounced mid honk.

The high-gain options on the II blow the original out of the water. Switching to Brit Hi or Modern on the THR10 always results in a compressed mess with half the volume of the other amp models. On the II it’s a much different story: HiGain and Special have some body and roar to them. Unlike on the original, you might even be able to hear it over an actual drummer in a rehearsal space. But I can’t personally vouch for that.

The place where the II can’t match the original THR, though, is on the Crunch setting. It’s hard to explain, but the original feels crisper and warmer. What’s more, it’s actually my favorite of all the amp sounds, which makes it all the sadder that frankly, Crunch on the new amp sounds pretty rough.

The effects algorithms have also been tweaked. Most of the differences are subtle, except for the chorus, which now has a much more modern voicing, compared with the ’80s-ish wash on the original. That’s neither good nor bad; it’s just a matter of personal taste.

For this video I’m playing a guitar loop with all the controls set to 12 o’clock as I cycle through each amp model. The amps were recorded using two SM57s connected to a Scarlett 2i4. No additional processing was done to the raw recordings.

All right, so it’s a digital-modeling amp with some built-in effects. Big deal, right?

Well, beyond still offering some of the best tones you can get without waking a light-sleeping baby, the THR has a number of features that help elevate it above your standard practice amp. But there’s a bit of give and take between the old model and the new.

Let’s start with the battery. Yes, that’s right, the THR10 II Wireless has a built-in rechargeable battery. This might not sound like a huge deal, but let me tell you: It’s an absolute game changer. Yes, most of the time my amp just sits on my desk in my “studio” (read: a corner of the living room behind a baby gate). But sometimes I want to sit on the couch or — really anyplace other than the desk I’ve been working at all day. If I’d prefer to keep the amp at a gentle whisper instead of cranking it, I can just stick it on the coffee table facing directly at me. It’s also super handy for spontaneous jam sessions and busking. (Though clearly the latter will be relevant to few of you.)

The original THR could also be powered by batteries, but it required eight AAs. That’s far less convenient than an integrated rechargeable. But remember, the THR has to take too. The base model $300 THR II can’t be powered by batteries at all. You have to spring for the $450 THR10 II Wireless. That’s a pretty big price jump and a pretty major feature that’s lost.

The Wireless version also includes support for Line 6’s G10T transmitter. That means with the right adapter for your instrument, you don’t need any cables at all. If the transmitter was packaged as part of the bundle, the $450 asking price might be easier to swallow. But it’s a $100 optional accessory that you have to spring for. That’s not the case with the $400 Katana Air, for example, which comes with a Roland transmitter in the box.

I’ll say this though: I was pretty dismissive of the wireless at first. But after a few weeks living with it, I was a convert. Being able to freely wander around my living room and entertain my child, all while keeping my amp safely plugged in behind a baby gate, was pretty great. In general it was nice having one less thing to worry about tripping over.

The THR line can also still be used as an audio interface with your computer. Plug it into the USB port and you can capture riffs and record songs without having to wire up a mic. There’s even an option to simulate different speaker cabinets to pair with your virtual amp through the THR remote. Again, there’s a trade-off here. On the original THR you could capture both the affected tone running through all of Yamaha’s amp and effect simulations and a dry tone without any of that simultaneously. That’s super handy when you’re recording. Maybe you decided that you like a particular take but not the effects or amp you applied. You could grab that unaffected signal and reamp it in your DAW. But on the THR II, you have to choose one or the other; you can’t capture both at the same time.

At least the driver support and the app for the THR II are much better. Half the time I can’t even get my laptop to recognize my OG THR amp when I connect it. I never had any issues with the new model, and the addition of Bluetooth has made things much much easier. You don’t have to rely on wonky USB support to expose the more fine-grain controls hiding under the hood. Instead the THR Remote app connects seamlessly and reliably, allowing you control over things like depth, pre-delay and mix on the chorus effect. Or tone controls on the delay.

Inside the app you also have access to 10 additional amp models that simply don’t exist on the original THR. Instead, to access similar “boutique” and “modern” tones, you’d have had to buy special separate amps: the THR10C and THR10X, to be specific. Plus, now you can stream music from your phone to the amp via bluetooth to practice or jam alongside.The THR10 II Wireless is an undeniably feature-packed and worthy successor to the beloved original THR line. But the landscape has changed dramatically since 2011. Yamaha no longer stands alone in the world of attractive desktop amps that excel even at low volumes. It has to fend off competition from the likes of Boss and Vox as well as upstarts such as Positive Grid, the latter two of which have similar amps for around $300. But the base-model $300 THR10 II lacks many of the more unique features that help the line stand out. Meanwhile the Wireless version costs significantly more than much of the competition. And while the Yamaha app is solid, it doesn’t exactly outclass offerings from Vox and Boss.

Yamaha also has to compete with itself now too: The Original THR10 is still on shelves and can be had for just $200. For all of its flaws and quirks, it’s still a great-sounding amp that doesn’t need to be hidden when company comes over and won’t piss off your neighbors.

And, if you’re willing to skip the idea of a tiny desktop amp you can carry around, the Katana MkIIs are probably the best bang for your tone buck.

So as a value proposition, Yamaha certainly doesn’t have the edge. You have to decide if the rechargeable battery and good looks are worth the premium that the THR10 II Wireless demands. Those are not features to be dismissed, but the cost here will certainly limit its appeal.

amp, amplifier, art, av, desktop amp, gadgetry, gadgets, gear, guitar, guitar amp, modeling amp, musical instrument, review, thr, thr ii, thr10, thr10 ii, thr10 ii wireless, video, yamaha
All products recommended by Engadget are selected by our editorial team, independent of our parent company. Some of our stories include affiliate links. If you buy something through one of these links, we may earn an affiliate commission.