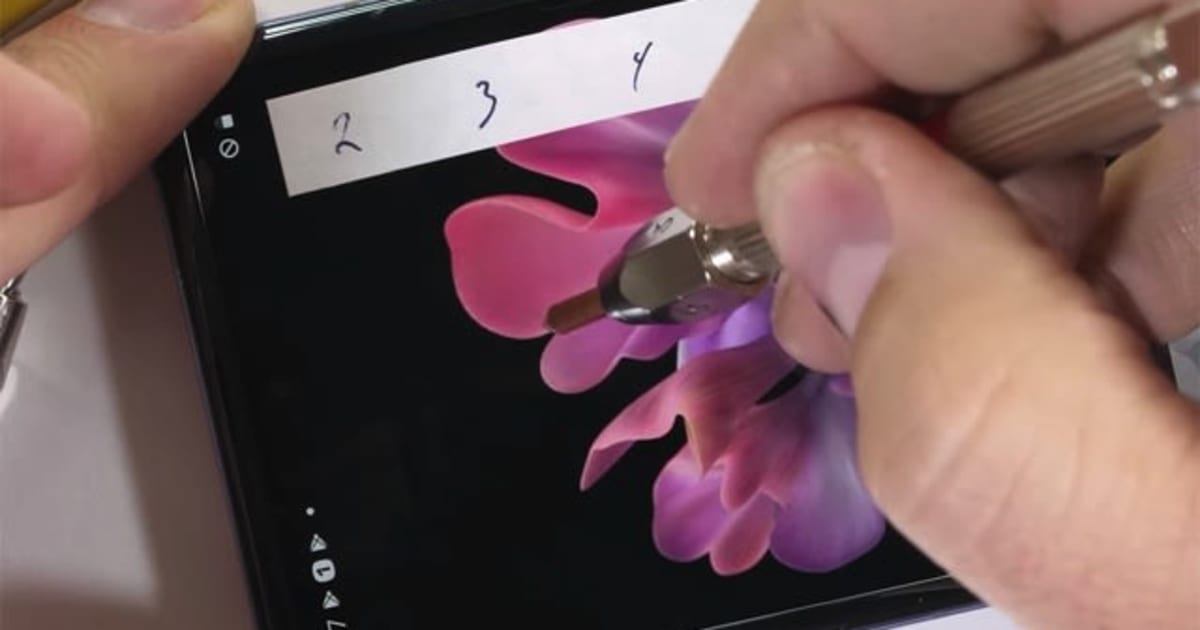 Welcome back to the week. You might have noticed the return of the durability test. Thanks to a new phone form-factor (hello, foldables!), there’s never been a better time to ruin a thousand-dollar purchase. The Galaxy Z Flip, which we’ve had for a day or so, is the latest torture victim. (Wince here.)

YouTuber JerryRigEverything put Samsung’s Ultra-Thin Glass to the test with some puncture testing. It didn’t fare too well — even if it seemed more robust than Motorola’s Razr or last year’s Galaxy Fold.

Over 20 years ago, people used to put iPhones in blenders. Admittedly that was to test the blender, not the iPhone, but why are these stress ‘tests’ back again?

It’s because they’re good for business. You have phone repair companies, companies that have phone-folding robots, people looking to sell blenders and media looking for a spicy headline to compliment the biggest gadget launches.

At the same time, it doesn’t help that companies are often creative with their claims — especially when it comes to durability. I recall water-testing a smartphone a few years ago, where I dunked a flagship smartphone in seawater. And it never worked again. Apparently those ‘it-lasts-30-minutes-in-water’ claims were for water that wasn’t quite as salty. (Note: Galaxy’s Z Flip is not rated for water- or dust-resistance at all.)

We need both sides, the phone makers and the phone breakers, to help make informed judgment calls on how hardy devices are, but no-one can truly test the resilience of your next smartphone, except you. Maybe you would barely open a foldable phone, or maybe it’d float in the bottom of your bag most of the time — your mileage will vary. I’m looking forward to our final verdict on the Galaxy Z Flip as the folding nature should mean the screen is hidden away when not in use.

Foldable smartphones already have a reputation for being more delicate than the traditional smartphone, but this was also true of the original smartphones that came after candy-bar feature phones. They should — they must — toughen up.

On Valentine’s Day, someone fell in love with a foldable phone.24 hours with Samsung’s Galaxy Z Flip

The Galaxy Fold fiasco proved that being first isn’t always best. Subsequently, Motorola’s Razr appeared just last week, but it’s not great either. (Read our review on that foldable, here.)

The Galaxy Z Flip — a 6.7-inch phone that, like the Razr, folded in half — is Samsung’s second folding smartphone, sturdier than the Galaxy Fold and with a more valid proposition. A flagship phone that’ll fit into your pocket. The phone arrived in stores on Valentine’s Day, and after testing out a sample for 24 hours, Reviews Editor Cherlynn Low already has feelings of a sort. While we work on our full review, here are some early thoughts.

The Galaxy Fold fiasco proved that being first isn’t always best. Subsequently, Motorola’s Razr appeared just last week, but it’s not great either. (Read our review on that foldable, here.)

The Boring Company has finished excavating the first of the two tunnels planned for Las Vegas Convention Center’s underground loop transportation system. If you’ll recall, the Las Vegas Convention and Visitors Authority (LVCVA) tapped Elon Musk’s company to develop the LVCC loop, which could cost around $52.5 million. The company retweeted a video posted by the LVCVA of its machinery breaking through a wall in the facility. Boring’s crew spent three months digging the nearly mile-long tunnel 40 feet underground. LVCVA says the project is scheduled to debut in January 2021.

It pulled in more money than ‘Detective Pikachu’ despite its early issues.‘Sonic the Hedgehog’ breaks record for a video game movie debut

The Sonic the Hedgehog movie has come a long, long way from that horrifying initial trailer. Paramount’s adaptation just broke the record for a video game movie’s three-day opening in the US, pulling in $57 million compared to Detective Pikachu‘s $54.3 million. Estimates have Sonic raking in $68 million over four days, which could give it one of the best Presidents Day performances of any movie. It might be enough to coax even more video game adaptations out of the woodwork. Not sure how I feel about that…

Apple Health and Strava can finally talk to each other.Strava now syncs workout data from your Apple Watch

While there is a Strava app for the Apple Watch, there’s not as much of an incentive to get the wearable if your data stays isolated — which it did until now. Strava has added Apple Health syncing to its iOS app, letting it pull in activity data from the past 30 days. You can pick the workouts you want to share, title them and add photos to boast about your achievements.

It’s a two-way connection as well. You can automatically send any Strava activities to Health, so you don’t have to worry if you leave your Apple Watch at home.

entertainment, gadgetry, gadgets, gear, internet
All products recommended by Engadget are selected by our editorial team, independent of our parent company. Some of our stories include affiliate links. If you buy something through one of these links, we may earn an affiliate commission.