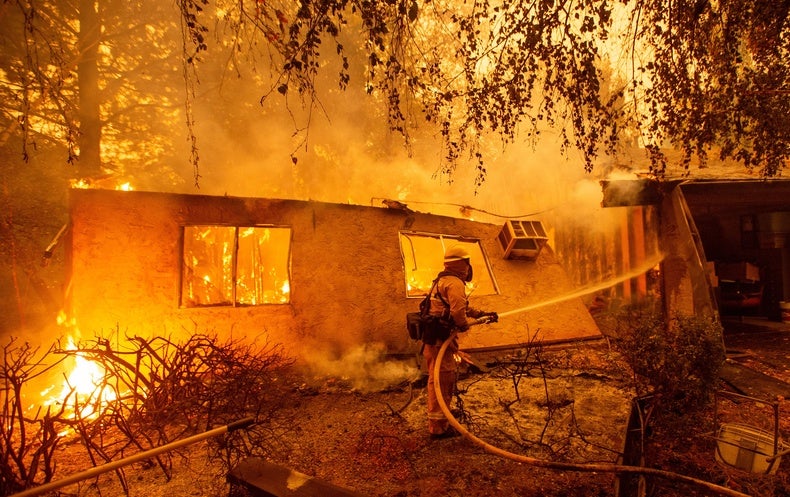 Climate change has doubled the number of extreme-risk days for California wildfires, according to research released yesterday.

An analysis led by Stanford University found that temperatures rose about 1.8 degrees Fahrenheit statewide while precipitation dropped 30% since 1980. That doubled the number of autumn days—when fire risk is highest—with extreme conditions for the ignition of wildfires.

“That’s a really big increase over a relatively short period of time that can be attributed directly to the changes in climate,” said Daniel Swain, a climate scientist at UCLA and one of the study’s authors.

The number of extreme-risk days will continue to grow “given that the climate will continue to warm somewhat more, no matter what we do,” Swain said. The study noted, however, that actions to mitigate climate change “would substantially curb that increase” later in the century.

“This risk is definitely going to get worse before it gets better,” Swain said. “On the other hand we have a lot of control over how much worse it gets.”

California in recent years has experienced the deadliest and most destructive fires on record. That’s triggered extreme adaptation efforts, including shutting off electricity to millions of people by Pacific Gas & Electric Co., the state’s largest utility. The blackouts were aimed at preventing downed lines from sparking blazes.

The study found the Golden State’s climate has shifted considerably in recent decades. The five warmest years on record occurred from 2014 to 2018. Over the past century, temperatures have risen year-round “with the most pronounced warming in the late summer and early autumn.”

In November 2018, the Camp Fire—the deadliest on record—rampaged through Paradise, a small community in the northern Sierra Nevada foothills. Soon after it started, the Woolsey Fire ignited near Los Angeles. The Camp Fire burned in a region that historically would have seen 5 to 10 inches of rain by that time of year, Swain said. Instead vegetation was tinder.

The number of extreme-risk days is especially important because they occur in autumn. That’s when California typically sees hot, dry winds, known as Santa Anas in Southern California and Diablo winds in the north. They helped drive the Camp and Woolsey fires.

Weather records were broken in the months before those blazes in 2018, the study said.

“Much of interior northern California and coastal southern California experienced the hottest summer on record in 2018, and autumn rainfall did not arrive across much of the state until mid-to-late November—thus predisposing the region to extreme fire danger conditions,” the study said.

The northern Sierras and the Malibu area, both of which suffered damaging fires in 2018, have warmed roughly 0.6 F per decade since the early 1980s, the study said.