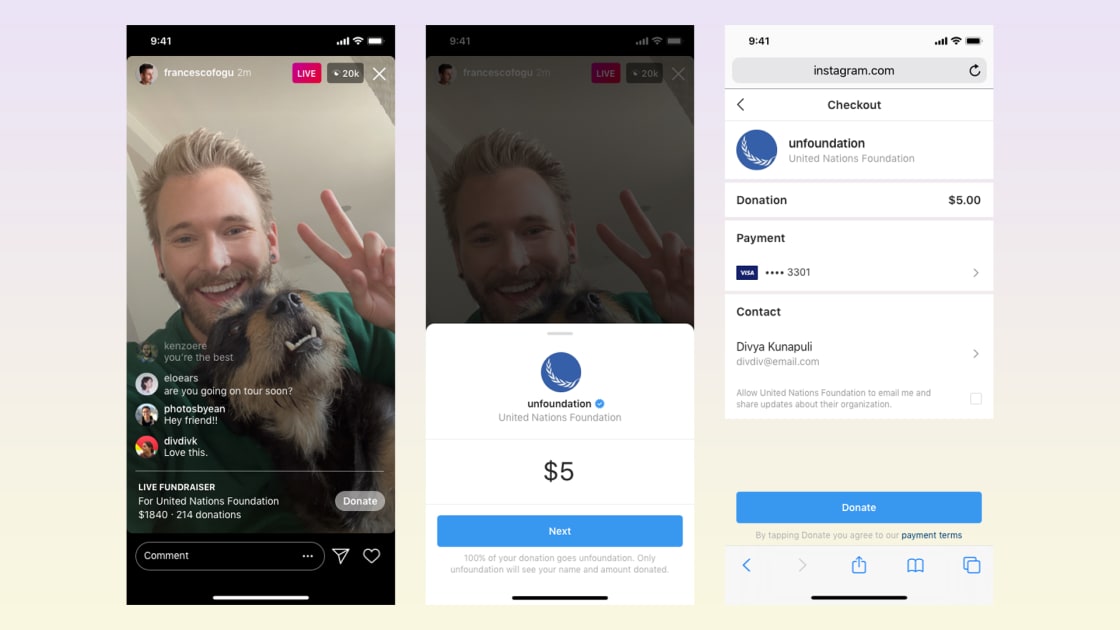 Nonprofits now have a new way to fundraise on Instagram: live streams. Broadcasters can now host “live fundraisers” to solicit nonprofit donations from their followers in real time. The update comes as celebrities and other influencers increasingly turn to Instagram’s live streaming feature, and as Facebook looks to lure more users to its video tools.

The new fundraising feature, which was first revealed last week, is now available in all areas where Facebook supports fundraisers.

Live-streamed fundraisers are similar to other donation features Facebook has launched: broadcasters choose a nonprofit to support before beginning their stream, and viewers can decide whether or not to kick in a donation using their credit card. Streamers can track funds as they come in and anyone who donates will unlock an “I donated” sticker, similar to the “Stay Home” sticker the company introduced in March.

Instagram users have previously been able to fundraise for nonprofits via their Stories, but combining donations with live video will make the experience much more interactive for fans and broadcasters. It also moves Instagram one step closer to the kind of in-app tipping popular on other platforms, like Twitch and YouTube, where celebs and influencers regularly ask fans for cash in exchange for shoutouts and other rewards.

While Instagram’s live fundraisers are for now limited to registered nonprofits, the company’s head of product, Vishal Shah, says the company is thinking about future monetization features that could extend to other businesses or individuals.

“We think there is this ecosystem that’s quite powerful between creators and businesses and their fans and followers,” Shah told Engadget. “That can definitely be an opportunity from a monetization perspective as well.”

As Facebook rushes to deal with the effects of the coronavirus pandemic, video — and live video in particular — has emerged as one of the most important features for the social network, which is seeing more than 800 million people watch live streams each day. That surge in use also offer the company new opportunities to challenge rivals on features like video calling and, now, live streaming.

There are other signs that Facebook is laying the groundwork to compete more closely with Twitch, YouTube and others. Instagram’s announcement comes just days after Facebook announced it would allow streamers to charge for access to live broadcasts associated with events. The company also recently launched a dedicated app for game streaming.

Facebook, instagram, live streams, Fundraising, Covid-19, coronavirus, Twitch, YouTube, news, gear
All products recommended by Engadget are selected by our editorial team, independent of our parent company. Some of our stories include affiliate links. If you buy something through one of these links, we may earn an affiliate commission.