Toyota’s 2021 Sienna minivans will all be hybrids 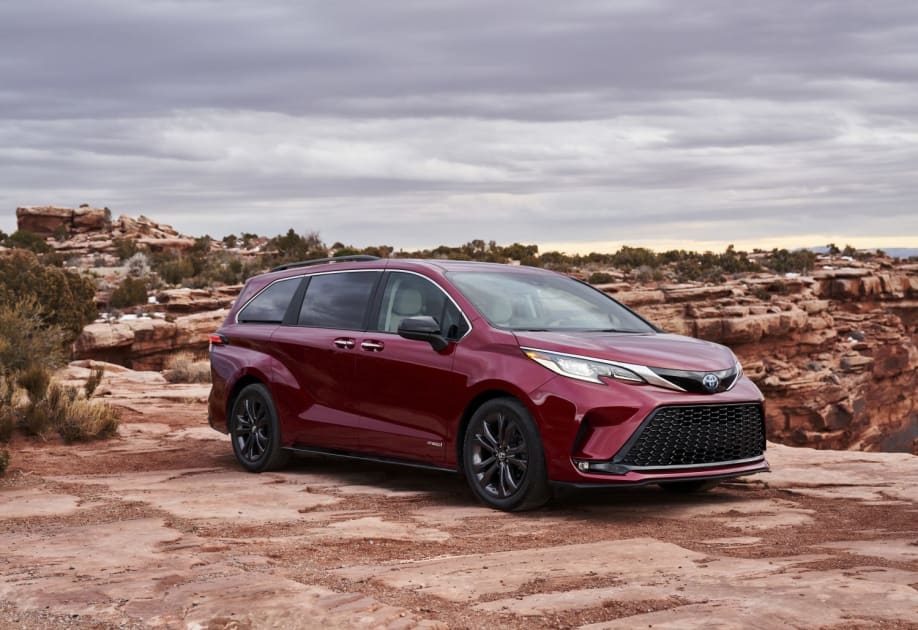 Toyota’s new, 2021 Sienna is notable for two reasons. First, just look at this thing: It has plenty of sharp body lines and massive front grille that, while supposedly inspired by Japanese bullet trains, looks more like a tremendous scowl. It’s meant to ferry families around, all while looking incredibly aggro. Second — and more importantly — every version of the new Sienna is a hybrid.

So, what will roughly $33,000 net you when these roll into dealerships later this year? Among other things, a 2.5-liter, four-cylinder engine, helped along by a pair of electric motors powered by batteries under the front foot wells. (Don’t worry about recharging those batteries, either; this thing isn’t a plug-in hybrid.) In tandem, the 2021 Sienna produces a maximum of 243 horsepower, which is noticeably less than what you’d find in the current crop’s naturally aspirated V6 engines. That dip in power may mean this minivan is a little less fun than the outgoing model, but it should make up for that in pure practicality — the 2021 Sienna is rated for 33 combined miles per gallon, up from the earlier model’s 20-ish.

Roadtrippers will be pleased to know that new Sienna can tow the same 3,500 pounds of whatever as its predecessor and that all trim levels can be kitted out with all-wheel drive. And as usual, those trim levels offer a pretty wide variety of features. Need a minivan with a built-in vacuum? Or a tiny refrigerator? A 10-inch heads up display or a bird’s-eye camera? Toyota’s answer to all of the above is “Sure, why not?”

That Toyota would release a hybrid minivan isn’t much a of surprise: The shift has been the subject of leaks and speculation for months. What’s more interesting is that Toyota seems to have given up on gas-only minivans completely. Even though Chrysler’s hybrid Pacifica beat Toyota to the punch and that quickly became a green car favorite, parent company FCA still felt it important to keep the original model around for traditionalists and people who weren’t ready to splurge. Assuming its redesigned 2021 models don’t tank — a distinct possibility when you consider the effect COVID-19 is having on car sales at the moment –Toyota embrace of hybrid family shuttles may well be permanent. If it is, we certainly wouldn’t mind seeing other automakers follow suit.

toyota, cars, sienna, 2021 sienna, hybrid, minivan, hybrid minivan, car, automotive_industry, news, gear
All products recommended by Engadget are selected by our editorial team, independent of our parent company. Some of our stories include affiliate links. If you buy something through one of these links, we may earn an affiliate commission.