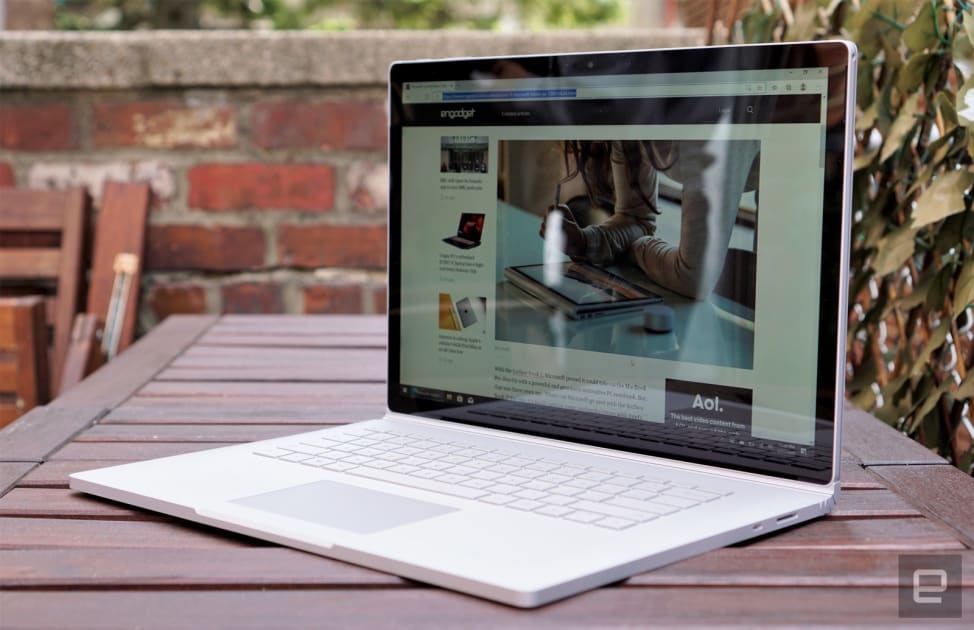 The Surface Book 3 is a curious beast. Just like its predecessors, it’s a premium notebook with a unique feature: Hit a button, and the screen pops out to serve as an enormous tablet. Plug the screen on backwards, and you can use the keyboard as a kickstand. The Surface Book 3’s removable screen and hinge still stands out in the laptop world — many PC makers took a stab at making their own Surface-like tablet PCs, but none dared to mimic the Book’s approach. Now, I’m beginning to see why.

The Surface Book was originally designed to be the “ultimate laptop” for creators, something Microsoft nearly achieved with the Surface Book 2. But that was three years ago. These days, competitors like the MacBook Pro 16-inch and Dell’s revamped XPS 15 are cramming in a ton of power into slim cases. And notably, they’re using much faster hardware than Microsoft. Despite a few upgrades, the Surface Book 3’s unique design severely limits its potential.

The Surface Book 3 offers a few hardware upgrades, but its unique design is clearly holding it back against more powerful competitors. It’s still a compelling option for creatives, but be aware there are far faster machines for the same price. 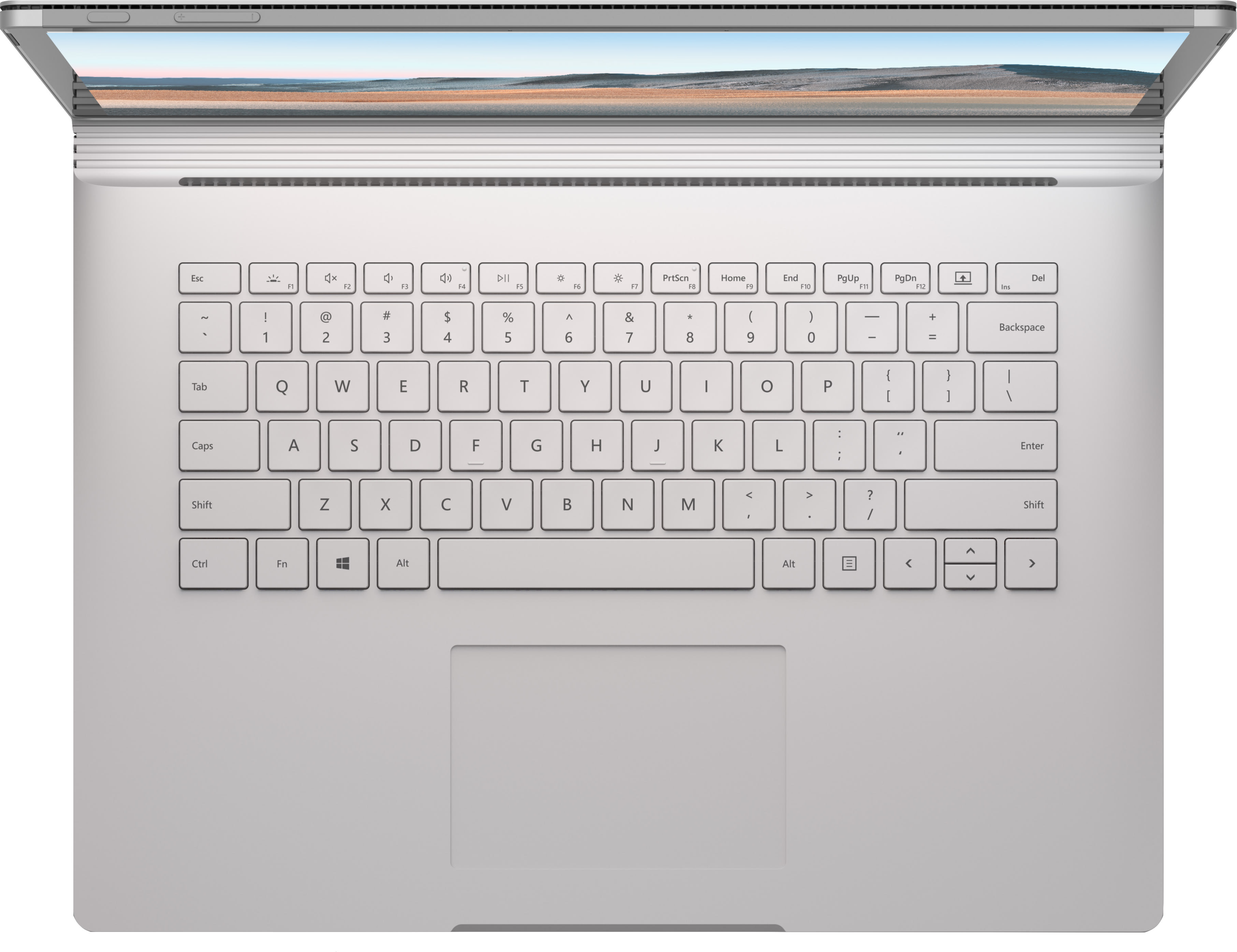 Be the first to review the Surface Book 3 15-inch?
Your ratings help us make the buyer’s guide better for everyone.

That’s because it’s not like a normal laptop — it’s really a large tablet with a detachable keyboard. Most of its components — the CPU, RAM, storage and main motherboard — lie behind the screen. The keyboard base, meanwhile, holds a larger battery and dedicated graphics. It’s an ingenious way to craft a detachable PC, and Microsoft’s engineers deserve plenty of credit for going completely against the grain. But now, it’s beginning to seem like a liability.

Take the new hardware. The Surface Book 3 features Intel’s quad-core 10th generation Ice Lake CPUs, which max out at a 3.9GHz Turbo Boost speed. (Those chips also appear in the Surface Laptop 3, an ultraportable that doesn’t even pretend to handle heavy lifting). The MacBook Pro 16-inch, on the other hand, offers Intel’s recent six and eight-core CPUs, including the monstrously powerful 5GHz Core i9. Dell’s XPS 15 can also be configured with similar chips reaching up to 5.1GHz. You do the math. There’s just no way the Surface Book 3 can compete in a CPU fight.

At least Microsoft is competitive on the graphics front. You’ve got NVIDIA’s GTX 1650, GTX 1660 Ti and Quadro RTX 3000 as options, the latter of which is much faster than the MacBook Pro 16-inch’s Radeon GPUs. You’ll have to jump through a few more hoops to get that Quadro GPU though, as it’s only available to corporate customers.

I’m not saying the Surface Book 3 isn’t impressive. It still looks and feels like a high-quality machine, though the design hasn’t budged at all since the last model. There’s the same all-metal case, the unique bulbous hinge (that leaves a slight gap open when closed), and a large 15-inch screen. But since we last saw the Surface Book, most PC makers have started seriously slimming down their bezels to fit in larger displays and reduce weight. The Book 3, unfortunately, still has thick screen borders that make it look like a notebook from 4 or 5 years ago.

Previously, I also knocked the 15-inch Surface Book for being heavier than its competitors at 4.2 pounds. But, ironically enough, Apple ended up making the MacBook Pro 16-inch a bit chunkier as well, so it now slightly outweighs the Book 3. But as you’ll see, I think Apple justifies its heft a bit more. And the MacBook Pro is also significantly slimmer — the Book 3 is up to 23 millimeters thick, while the MacBook Pro maxes out at 16.3 millimeters.  As usual, Microsoft’s curved hinge makes things stick out quite a bit.

One benefit of being so large, though, is that the Surface Book 3 is able to fit a wide keyboard and roomy touchpad. It’s all the same hardware we saw a few years ago, but they’re still excellent. The keys have plenty of depth and responsiveness, making them a dream to type on. And the smooth glass touchpad is among the best I’ve used on a Windows notebook.

So sure, there’s a lot to love about the Surface Book 3. But if you want to know why I’m being so critical of its new hardware, just look at the benchmarks. In PCMark 10, it scores a notch below Dell’s recent XPS 13. And even more damning, it scores only a few hundred points higher than HP’s Elite Dragonfly, a 2-pound PC whose performance we called “middling.” If you’re trying to be a powerhouse machine, this isn’t the company you should be keeping. Its Geekbench 5 multi-core speeds also fell behind the new MacBook Pro 13-inch, and it was once again bested by the XPS 13. The Surface Book 3 fared better in Geekbench 5’s Compute benchmark, where the NVIDIA GPU brought it in line with ASUS’s excellent Zephyrus G14 (a much cheaper machine with far better CPU scores).

The GTX 1660 Ti is clearly the lynchpin of the Surface Book 3’s performance, and it also means the notebook can finally handle some decent gaming. Running in 1080p, I clocked between 110 and 130 FPS in Overwatch with “epic” graphics settings. The Hitman 2 benchmark also delivered a solid 72 FPS with maxed out settings. To be clear, you can get similar performance from gaming notebooks that cost half as much. But at least Book 3 owners will be able to get some fragging done alongside their creative work.

The real question any potential Surface Book 3 owner needs to ask? Is it worth spending a ton on a premium notebook that’s not as fast as a MacBook Pro, but has a screen you can pop out. Three years ago, I saw a lot more potential in the Book’s massive tablet display. But these days, it seems less useful. For one, the Book 3 is still awkward to hold as a tablet, since it’s very large and weighs nearly 2 pounds.

At best, it’s really only good for binging video or reading a few articles. There still aren’t any truly great tablet apps on Windows 10, so you’ll be stuck navigating software that’s primarily designed for a keyboard and mouse. Even modern Windows apps like Mail and Office are frustrating to use with just a touchscreen. And sure, if you had a Surface Pen ($79 extra, of course), you could dive into the enormous screen for digital artwork. But the 15-inch Book 3 is a bit too large just for notetaking.

After spending plenty of time with the Surface Book 3, and seeing how it compares to other premium notebooks, I’m beginning to wonder if it’s worth having a 15-inch model at all. Microsoft could easily keep the 13.5-inch Book around for people who want a detachable screen. But given how clunky a 15-inch tablet is, it might make more sense to pursue a completely different design that could actually hold a powerful CPU. We’ve seen a few wild experiments, like Acer’s Triton 900, which has a rotating screen that swivels back and forth. And while that machine wasn’t entirely successful, Microsoft could refine a similar approach. We’ve also seen plenty of concept devices from Intel that fit in dual screens and unique hinges.

If you’re still intrigued by the Surface Book 3, be prepared to shell out big bucks. The 15-inch model starts at $2,300 with a Core i7 1065G7 CPU, 16GB of RAM, 256GB SSD and NVIDIA’s GTX 1660 Ti. That’s $100 less than the MacBook Pro 16-inch’s starting price, but that machine also gets you a faster six-core CPU and a 512GB SSD. I’d say Apple is providing the better value there, especially when you compare benchmarks. If you want NVIDIA’s Quadro RTX graphics on the Surface Book 3, you’ll have to shell out at least $3,500 via a commercial reseller.

Here’s the thing: I’ve followed Microsoft’s Surface line from the start, and I’ve grown to love how the company that gave us Windows is pushing PC designs in bold new directions. It’s doing more creative work than Apple these days, and that’s saying something. But the Surface Book 3 just feels too familiar and underpowered. Microsoft needed a bold redesign here — this ain’t it.

Surface Book 3, Microsoft, laptops, detachable laptops, tablets, Windows, commerce, review, gear
All products recommended by Engadget are selected by our editorial team, independent of our parent company. Some of our stories include affiliate links. If you buy something through one of these links, we may earn an affiliate commission.