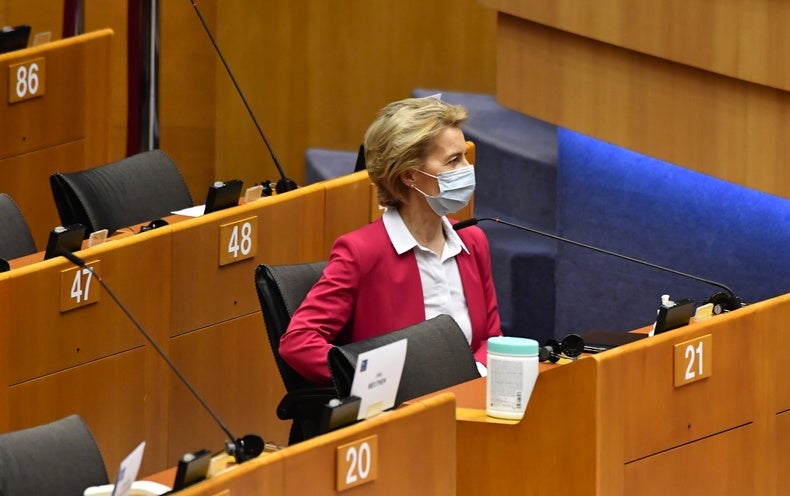 Notable is that European Commission President Ursula von der Leyen views the proposal as a vehicle to steer the continent toward carbon neutrality by 2050. That’s a critical deadline if the world is to avoid the worst effects of global warming.

“We must ensure that the transition to a climate-neutral economy leaves no one behind,” von der Leyen told reporters after the plan was released. “The aim must be to invest together in our own common good.”

The package, however, still has several hurdles to overcome—including earning the approval of E.U. member states. And some observers aren’t satisfied, either. Though the proposal is more ambitious on climate change than other international COVID-19 recovery plans, it still doesn’t go as far as it should, they argued.

It would raise new revenue and overhaul spending priorities while directing tens of billions of euros to the hardest-hit economies, in particular Spain and Italy.

All told, the European Union’s spending in response to the coronavirus pandemic would amount to some €1.85 trillion in total, von der Leyen said, including the new €750 billion proposal floated yesterday and some €1.1 trillion already mobilized to help E.U. member states make it through their worst economic crisis since World War II.

She promised that most of the plan would be paid for via debt raised in capital markets, loans “with very long-term maturities.” Some of it would also be paid for in part by new taxes, including taxes on carbon emissions, “a new carbon border adjustment mechanism,” and taxes on “big companies that benefit most from the single market,” she said.

The proposal needs to pass the European Parliament and European Commission, and then next by the individual member states in their parliaments. Von der Leyen told reporters she’d like to accomplish all this before the end of the year.

“We need to be very resolute in our response to this crisis,” she said, “but we must do it in such a way that we prepare for the future.”

She promised skeptical E.U. member states and politicians that the new radical funding and spending proposal would “be strictly time limited and as extraordinary as the current crisis.”

The European Commission declared that €560 billion would be disbursed as a “Recovery and Resilience Facility” providing funding for a variety of programs, including “the green and digital transitions,” through a mix of grants and loans.

The post-pandemic recovery plan also earmarks €40 billion for a “Just Transition Fund” “to assist Member States in accelerating the transition towards climate neutrality,” the commission said.

The proposal builds on other efforts in Europe to tackle climate change through pandemic recovery plans.

“The planned medium and longer-term economic aid measures must not only provide an economic stimulus, but also contribute to our common goal: a resilient economy and society that achieves climate neutrality through a high level of innovation and competitiveness,” the business coalition urged.

Helen Mountford, vice president of climate and economics at the World Resources Institute, has called on all nations to adopt similar climate-oriented ambitious recovery plans.

“This is a chance for all countries to build back better, by providing greater access to clean energy and transport, healthy natural systems and also good quality jobs,” Mountford said in a release.

Not all governments have responded to a rising chorus of voices demanding a green economy recovery.

The International Monetary Fund has been tracking national stimulus and economic recovery plans. So far, only a handful of them directly target climate change, the IMF reports. Some spending is headed in the opposite direction through government fuel subsidies and other fossil fuel-friendly measures.

The IMF’s COVID-19 recovery tracker notes a lot of global spending on electricity cost relief. Other measures the IMF has noted include fuel price discounts for aviation. Some governments are buying fuel for their fishing fleets, while others are extending economywide fuel subsidies instead of eliminating them as the United Nations’ top leadership has called for.

Some observers say that the European Union’s stimulus spending measures aren’t as climate-friendly as leaders make them out to be, yet they acknowledge that the E.U. Green Deal and the package announced by von der Leyen yesterday are far more environmentally friendly compared with other national plans.

Though somewhat vague, the new E.U. plan calls for investments in “clean technologies and value chains” and for increasing investments in renewable energy, energy storage, hydrogen, and carbon capture and storage technologies. Funds under the plan would be directed toward installing 1 million EV chargers. But it also proposes a “renovation wave” of basic infrastructure investments to create millions of “jobs in construction, renovation and other labor-intensive industries,” according to a European Commission outline.

Funds would also be directed at research and development programs to combat the current disease crisis and for preparing for future disease outbreaks.

“We see that a large majority, over 90% of stimulus, is not considered to be green,” said Domien Vangenechten at the European Roundtable on Climate Change and Sustainable Transition, referring to the European Union’s Green Deal initiative. “However, there is a big difference between E.U. countries as well as compared to the rest of the world.”

There is particular concern over how China will design an overall economic recovery plan.

Following the global financial crisis of a decade ago, Beijing launched a massive round of infrastructure spending that saw its greenhouse gas emissions soar to new heights. China is now by far the world’s largest producer of heat-trapping emissions.

In a recent study published in the journal Nature Sustainability, scholars in Malaysia and Australia expressed concern over China’s vaunted Belt and Road Initiative, whereby they say Beijing has already directed nearly $575 billion overseas in efforts often aligned against sustainability objectives. They see more to come, and are urging receiving nations and financing arms to put restrictions on the funding to ensure greater protections for biodiversity and other “indicators of environmental governance,” said the research team, led by University of Queensland professor Divya Narain.

The current pandemic economic response echoes the experience from the 2008-09 financial crisis when the United Nations and world leaders also called for “green recovery” spending plans.

The United States responded by creating the Advanced Research Projects Agency-Energy and extending tax credits for renewable energy. The U.S. government also implemented a “cash for clunkers” program for encouraging drivers to replace aging vehicles with more fuel-efficient alternatives. The U.S. Department of Energy was deployed to help homeowners improve the energy efficiency of their homes.

But the world generally failed to “build back better” as many voices had called for during that period.

Governments also failed post-2009 to heed multiple warnings and prepare for another bout of global financial turmoil, while continuing to largely ignore the negative impacts of climate change, said John Hewson, a professor with the Australian National University’s Crawford School of Public Policy.

“Governments and policy authorities just seem incapable of accepting scientific and other evidence,” he said. “They seem incapable of listening to the clear warnings and some predictions of many, including scientists, and are generally unwilling to think longer-term and strategically.”

Since 2009, the European Union has had only modest success in reducing the bloc’s greenhouse gas emissions, though a substantial decline was recorded last year before the pandemic forced much of the European economy to lock down in an effort to fight the spread of the coronavirus.

Von der Leyen is promising a true transformation of Europe’s economy this time around. “We are at a defining moment for the European Union,” she said.

Advocates of aggressive action on climate change say they hope Europe actually follows through and that the rest of the world follows its lead.

In a call with journalists, Arnagretta Hunter, a member of the newly formed Commission for the Human Future, argued that now is the ideal time for governments to together tackle serious threats like pandemics and global warming.

“We are undergoing as a society a transformative period, and the opportunity for transformative change is one that we should embrace,” she said. “This is the greatest time to be getting this conversation underway.”