The Rock’s latest headphones are earbuds with bold battery claims

Missing Memories of the Universe

Missing Memories of the Universe 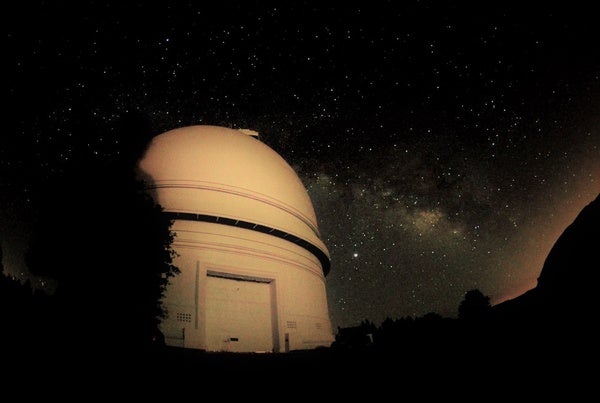 I am an astrophysicist. I read the memories of the universe, encoded in photons—tiny bits of light that have traveled to Earth over vast distances of space and time. Those photons carry, within their electromagnetic oscillations, a record of their voyages and what transpired in the past, from hours ago to billions of years ago, depending on their origins in, say, the volcanoes on Jupiter’s moon Io or the violent cores of distant quasars.

Now, because of an utterly unemotional biological force that does nothing but replicate, most observatories around the world are closed and vast numbers of these memories are going unrecorded. The constant rain of photons, normally recorded by advanced, supremely sensitive detectors on telescopes, instead slam into shuttered observatory domes after their long journeys. There, they transform into tiny motes of heat, only to be whisked away by a gentle breeze in the night, the memories they carried lost forever.

Several times a week, I video-chat with my graduate student Rose, one of the best emerging scientists I have ever worked with. I have not seen her since March 15, the last day we were both in the American Museum of Natural History where she is finishing her dissertation. She lives less than a mile away from me in Manhattan. The video-chat is better than naught, but it is inefficient and nothing like working together in the same room.

We have data to study that we took over this past winter. For example, we observed the giant star Betelgeuse, which we see, thanks to the finite speed of light, as it was about 500 years ago. However, we have lost two weeks of observing time at the 200-inch Hale Telescope at Palomar Observatory, where we use our radical new instrument designed to find and study the smallest planets around the most common stars in the galaxy. This project requires regular, repeated observations to observe changes in the motions of the stars we’re scrutinizing. Once we can resume, we will again learn fascinating things about these denizens of the Milky Way—but there is also a personal sadness in the loss.

Over the 27 years I have worked at Palomar Observatory, I have many memories of my own. I remember the peace and beauty of sleeping by day to work under gorgeous moonless nights, the whole sky ablaze with tiny lights that turn out to be some of the most complicated and fascinating phenomena human beings have ever attempted to understand. I remember the elation of seeing something no one had ever seen before—the first object smaller than a star ever observed outside the solar system, a so-called brown dwarf. I remember the valleys filled with clouds below the mountain as the sun came up, ending a wonderful, efficient night of collecting memories. I remember the technical crew—family, really—the dedicated people who keep that venerable observatory running. I remember the rattlesnakes in the summer, the occasional secretive bobcat peeking out of a shrub, and the beauty of a winter snow in Southern California.

Most of all, I miss those moments when we set the telescope to stare at some star for an hour or so while the instrument I built runs smoothly, collecting photons. While they accumulate, I go up to the catwalk, a grated walkway, about 50 feet above the ground. It wraps around the telescope dome, and, as I walk the full circle, I assess the clarity of the sky, a task that cannot be replaced by videos and cameras. I remember feeling supremely calm, looking at the night sky, knowing that a few of the universe’s memories are being recorded.

Many people might think my job is nonessential, and I suppose in some ways it is. I do not create food, shoes or toilet paper. But I do create knowledge and guide people to achieve the most advanced degree in the world, the Doctor of Philosophy. These people, my former Ph.D. students, have gone on to academic careers, but also to other types of work, such as providing real-time data to people who have heart problems or building some of the most sophisticated satellites ever conceived.

Perhaps more important, though, astrophysics, if not essential to our basic survival, is tied to the core of humanity itself—to understanding where, what and who we are. Understanding what is in this universe and how it works is utterly essential to human curiosity. Because of this, some 15,000 people in the world practice astrophysics. We are some of the standard-bearers of modern science, an enterprise that has outlasted countries, wars, depressions—and even global pestilences. Indeed, I believe that the current pandemic has already unleashed a new, infectious interest in science.

While many of the universe’s memories that have rained down on Earth over the past couple of months are lost forever, human curiosity has not diminished; it will demand that we resume astronomical observations as soon as we can. Even now, photons are traversing the Oort Cloud of icy cometary debris at the outer reaches of our Solar System. Those photons will reach Earth a few months from now. Perhaps by then, I will be back on that magnificent catwalk at Palomar, marveling once again at the majesty of the night sky, while my instrument, quietly humming inside the dome, collects them.