Tiny Gravitational-Wave Detector Could Search Anywhere in the Sky 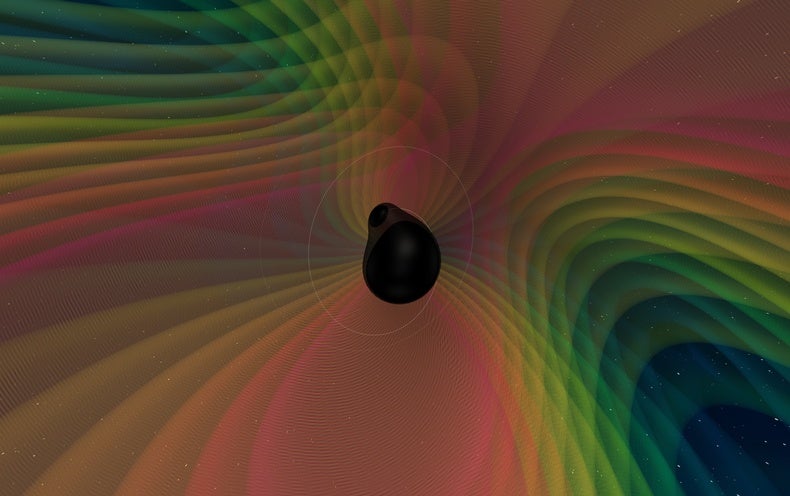 The smallest, most precise measurement ever made required one of the largest scientific instruments ever constructed. Five years ago the Laser Interferometer Gravitational-Wave Observatory (LIGO) detected a ripple in spacetime that was just one ten-thousandth the width of a proton—a technical tour de force tantamount to pinpointing the distance to the nearest star to three one-thousandths of a centimeter. The Lilliputian ripple was a gravitational wave, a distortion in the fabric of the cosmos generated by the collision of two black holes more than a billion light-years from Earth.

According to Albert Einstein’s general theory of relativity, the acceleration of any massive object creates waves in spacetime, much as a ship churns out waves in water. Einstein himself, however, thought gravitational waves would be too weak to detect. He was not unduly pessimistic. It took LIGO’s four-kilometer-long interferometers—which were completed in 1999 and began searching for the waves in 2001—13 years to finally spot one. The discovery marked the beginning of a new field of astronomy and netted a Nobel Prize for three of the observatory’s physicists. The experiment has since detected nearly a dozen more gravitational-wave events. Now, just as LIGO is hitting its stride, a team of physicists has outlined a way to build a portable gravitational detector that is only one meter long—4,000 times smaller than LIGO.

The proposal, which will be published soon in New Journal of Physics, describes a detector that would exploit a strange quantum mechanical phenomenon to reveal the passage of a gravitational wave. “The first and most important thing to know from the experimental side is that it would be phenomenally difficult to build it,” says Gavin Morley, a physicist at the University of Warwick in England and one of the co-authors of the study. If the team succeeds, though, the new device would offer a much more compact way of detecting gravitational waves that could be reproduced in many laboratories around the world.

The physicists call their proposed device the Mesoscopic Interference for Metric and Curvature (MIMAC). Despite their enormous size disparities, both MIMAC and LIGO look for the same effect: the rhythmic stretching and contraction of spacetime caused by a gravitational wave traveling at the speed of light.

In LIGO’s case, two identical instruments—one in Livingston, La., and the other in Hanford, Wash.—were built to rule out false signals from local gravitational effects. Each site has two four-kilometer-long vacuum chambers that meet at a 90-degree angle, forming a big L on the landscape. Forty-kilogram mirrors made of highly pure silica sit at both ends of each vacuum chamber. A laser beam constantly flits back and forth between the mirrors, monitored by a light detector at the corner of the L.

LIGO was designed so that under normal conditions, the light waves from each arm cancel out when they meet at the detector: no signal reaches it because the crests and troughs from each arm’s light overlap. But if a gravitational wave passes through the arms, it periodically stretches one of them and compresses the other, changing their length by a fraction of a proton’s diameter. Then the light waves no longer cancel each other: they send light pulses to the detector in sync with the passing gravitational wave, creating a distinctive flickering pattern.

So how could a meter-long device possibly accomplish the same feat? A key component of MIMAC would be a diamond particle no larger than a millionth of a meter. The researchers want to put such a diamond into a quantum superposition—a state in which the diamond would occupy two different positions simultaneously—and then wait for it to interact with a gravitational wave.

In addition to Morley, the team includes Sougato Bose, Peter Barker and Ryan Marshman, all at University College London, along with Anupam Mazumdar and Steven Hoekstra, both at the University of Groningen in the Netherlands. To create the superposition, they would beam microwaves at a single electron bound to a manufactured flaw in the diamond’s crystal lattice of carbon atoms. (The flaw consists of a single nitrogen atom inserted into the otherwise uniform array of carbon.) Then the extraordinary rules of quantum theory would kick in: the electron would, at once, both absorb and not absorb a microwave photon, creating a quantum superposition of the diamond. The electron in the diamond doppelgänger that absorbed the photon would shift to a so-called “spin one” state, meaning it behaves like a miniature magnet with its own magnetic field. The electron in the other version of the diamond would remain in a “spin zero” state—magnetically neutral. By applying an external magnetic field, Bose and his colleagues say it should be possible to pull the spin-one part of the superposition away from its neutral counterpart, separating them by as much as a meter. Finally, the physicists would reverse the magnetic field, bringing the two positions of the diamond back together, and hit it with one last microwave pulse.

That last pulse would trigger another strange quantum effect. In the quantum realm, particles are not really particles per se. They are actually waves, and their shape and size corresponds to the probability of finding a “particle” at a given position. The final burst of microwaves would be tuned to change the shape of the superposition so that the crests and troughs of the spin-one state overlap and cancel out, while the crests of the spin-zero state overlap and reinforce each other. Thus, in the absence of any outside interference, a measurement of the electron would always find it in a spin-zero state.

But any gravitational wave surging over the detector would stretch the superposition, changing its shape so that its components no longer aligned when rejoined. Measurements of the distorted superposition would then yield mixed results, with the spin-one state turning up in the data in sync with the frequency of the gravitational wave.

That scenario is the theory at least. Building a working model may take decades. Ron Folman, an experimental physicist at Ben-Gurion University of the Negev in Israel who was not involved in the proposal, called the idea “audacious.” Isolating the system so that the quantum particles do not interact with the environment will be extremely challenging, he says. “It’s a very hard experiment,” he adds, but it “may be realized within our lifetime, given enough dedicated effort.”

One of the biggest challenges will be to create superpositions of diamonds that can remain stable over distances of a meter. More than four years ago researchers at Stanford University managed to separate a superposition consisting of 10,000 atoms by about half a meter—the current record. “But we’re talking about doing it with diamonds that would have a billion or 10 billion atoms, and that is way more difficult,” Mazumdar says.

Many of the other technologies needed for the device—high vacuums, ultralow temperatures, precisely controlled magnetic fields—have all been achieved separately by various groups. But bringing them together will not be easy. “Just because you can juggle and ride a bike doesn’t mean you can do both at once,” Morley says.

If the device is ever built, it could transform gravitational-wave astronomy. The world’s current gravitational-wave detectors are all firmly anchored to the ground. “The only orientation LIGO can have is due to Earth’s rotation,” Bose says. A small detector such as MIMAC, on the other hand, could be pointed at any direction in the sky. And any physics lab in the world could house it. “The challenge is to get one of them working,” Bose says. “If one of them works, it would be very easy to make several more.”