A Movie of the Evolving Universe, Potentially Scary 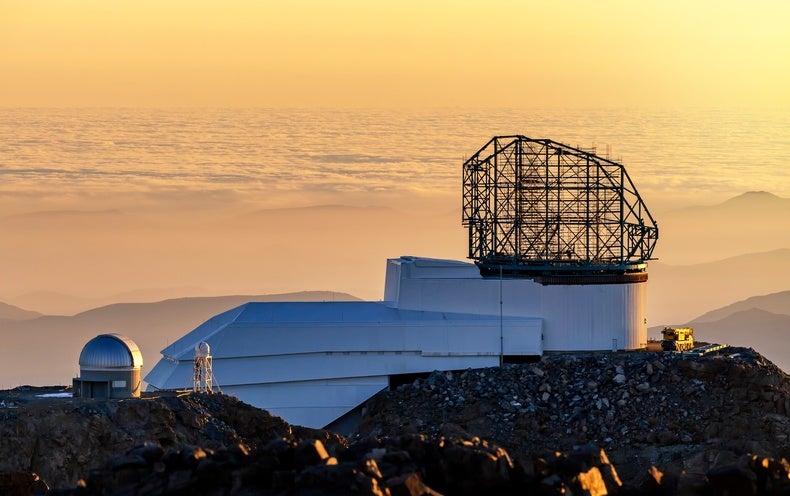 After the COVID-19 rules about social distancing went into effect, I developed a morning routine of jogging through the woods near my home. During the first months, I focused on the green branches that stretch upward towards the sky, but recently I started to notice the debris of tree trunks lying on the ground. There are many such remnants, eaten by termites, rotting and ultimately dispersing into the underlying soil. A glimpse at the forest reveals a sequence of evolutionary phases in the history of trees that lived or died at different times.

The phenomenon happens in other contexts. For example, I recently completed a nine-year term as chair of the Astronomy Department at Harvard. And only now have I begun to notice the former chairs scattered around me, just like those tree trunks in the woods.

Entering a new stage of life can be humbling. We acquire a false sense of permanence from reviewing the frozen past, as if it were a statue that will never erode. But this view is shortsighted, since each moment can also be seen a new beginning, shaped by forces beyond our control and swirling on a grander scale.

Old-fashioned astronomy was also permeated by a false sense of permanence. Astronomers collected still images of the universe, creating the impression that nothing really changes under the sun—or above it, either. But just like the revelation from my stroll through the woods, these snapshots showed stars and galaxies of different ages, at various evolutionary phases along their history. Computer simulations helped us patch together the full story by solving the equations of motion for matter, starting from the initial conditions imprinted on the cosmic microwave background at early cosmic times. By generating snapshots of an artificial cosmos similar to those captured by telescopes, these simulations unraveled our cosmic roots. The scientific insight that emerged is that the likely origins for our existence were quantum fluctuations in the early universe. Perhaps we should add “Quantum Mechanics Day” to our annual celebrations of Mother’s Day and Father’s Day.

There are some missing pages in the photo album made up of our observations, however: the period known as the cosmic dawn, for example, when the first stars and galaxies turned on. These missing pages will be filled in the coming decade by the next generation of telescopes, such as the James Webb Space Telescope (JWST), the ground-based “extremely large” telescopes and the Hydrogen Epoch of Reionization Array (HERA).

To reveal a more literal gap in the sky, the Event Horizon Telescope recently captured a still image of the silhouette of the black hole in the giant galaxy M87. The next goal is to obtain a sequence of images or a video, showing the time variability of the accretion flow around the black hole.

The tradition of still images makes sense when dealing with systems like galaxies, which evolve on a timescale of billions of years. But the universe also exhibits transient fireworks that flare up and dim during a human lifetime. Observing them is the motivation behind the Legacy Survey of Space and Time (LSST) on the Vera C. Rubin Observatory, which will have its first light soon. LSST will be a filming project, documenting nearly a thousand deep multicolor images per patch of the southern sky over a decade and recording the most extensive video of the universe ever taken with its plethora of transients in full glory.

Some of the LSST flares are expected to be the counterparts of gravitational wave sources detected by LIGO/Virgo or LISA. Their discovery will usher in multi-messenger astronomy based on both gravitational and electromagnetic waves emitted by the same sources, providing new insights about the central engines that power these transients. The related “standard sirens” could serve as new rulers for measuring precise distances in cosmology.

Within the Milky Way, transient events close to Earth could lead to catastrophe. A supernova explosion, for example, could cause a mass extinction on an unprecedented scale. If a meteor similar to the one that hit the unpopulated regions near Chelyabinsk in 2013 or Tunguska in 1908 hit New York City, it could cause a far larger death toll and economic damage than COVID-19. Or consider the impact of a blob of hot gas from the Sun, a so-called coronal mass ejection of the type that missed the Earth in 2012. Such an event could shut off communication systems, disable satellites and damage power grids. Altogether, astronomical alerts about such celestial threats could be crucial for securing the longevity of our species.

Of greatest relevance for our long-term survival is identifying large objects on a collision course with the Earth, similar to the Chicxulub asteroid that killed the dinosaurs 66 million years ago. In 2005, Congress passed a bill requiring NASA to find and track at least 90 percent of all near-Earth objects larger than 140 meters (enough to cause regional devastation) by 2020. Only a third of these objects have been identified in the sky so far. In a recent paper with my undergraduate student Amir Siraj, we explained some puzzling properties of the Chicxulub asteroid as a tidal breakup of a long-period comet that passed close to the sun. If future sky surveys alert us to another fragment whose apparent size grows rapidly against the sky, we’d better have a contingency plan to deflect its trajectory—or else immediately call our realtor.

Keeping up with the challenge of precision cosmology for the next few decades can demonstrate that the Hubble constant, which describes the expansion rate of the universe, is not really a constant, in accordance with the expected Sandage-Loeb test. In the long run, the only thing that stays constant is change. The accelerated expansion of the universe under the influence of so-called dark energy will be the ultimate manifestation of extragalactic social distancing in the post-COVID-19 era, preventing any future contact between us and civilizations outside our galaxy.