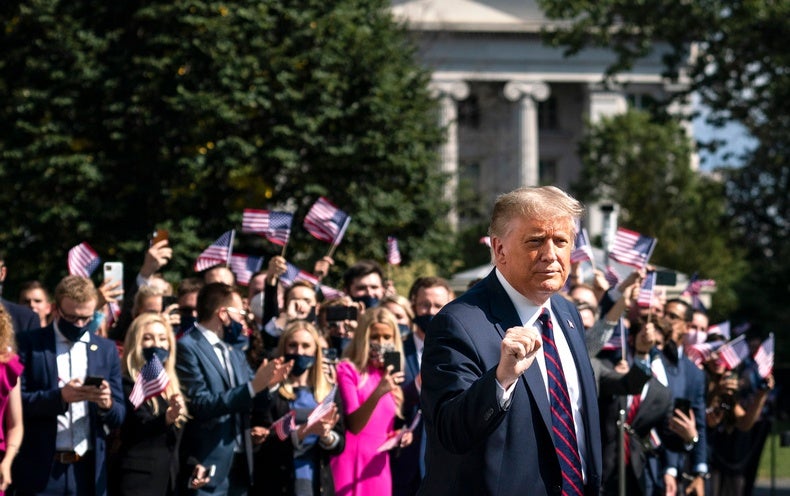 President Donald Trump has tested positive for SARS-CoV-2, the virus that causes COVID-19. First Lady Melania Trump, senior adviser to the president Hope Hicks, at least a couple of prominent Republican officials and others have also received positive results. The president had recently attended a fundraiser with hundreds of people at the Trump National Golf Club Bedminster in New Jersey, and he and several others were at an event on Saturday announcing the nomination of Judge Amy Coney Barrett to the Supreme Court (Coney Barrett herself reportedly had the virus this past summer). Trump has spent months denying the seriousness of the viral pandemic—claiming it would go away on its own, mocking the widely recommended use of face masks and touting unproved treatments. The president has reportedly displayed only mild, coldlike symptoms so far. But his age, combined with the fact he is male and overweight, puts him at an increased risk of developing a severe case of the sometimes deadly illness.

How his disease will progress remains to be seen, as does any impact it might have on both the government’s response to a pandemic that has killed well more than 200,000 Americans and the November 3 presidential election. But the situation will likely lead to greater calls for transparency about the Trump’s health, as well as conspiracy theories about how—or even whether—he was infected, according to Arthur Caplan, a bioethicist at the NYU Grossman School of Medicine.

Scientific American spoke with Caplan about the possible effects Trump’s diagnosis could have on public perceptions of the disease and the White House’s response to it.

[An edited transcript of the interview follows.]

What was your reaction to the news of the president’s diagnosis? And what impact do you think it could it have on the pandemic in the U.S.?

I think it could and will change things. How is a bit difficult to predict, but my hunch is we’ll get much greater calls for transparency about the president’s health. We’ve had them in the past, when he paid that visit to Walter Reed National Military Medical Center [in Bethesda, Md.] in November 2019. But I think we’re going to have a tsunami of interest and a huge amount of pressure. Second, I expect the conspiracy theorists to start to spin theories such as: Is he really infected? Is this a ploy? Who infected him? Was it deliberate? So I would watch for this information to come flying out. I think we’re also going to see many people say, “Look, this just shows that the downplaying of the virus and the behavioral measures that help reduce its spread were a gross error on the part of the White House and Republicans and Republican governors—and that we have to recommit ourselves to protective behaviors until we get a vaccine.”

How do you think this will affect the course of vaccine approval?

I think we’ll hear people say that the president’s touting of a vaccine coming soon was an empty promise, because it didn’t get to him in time. Weirdly, it may weaken some of the pressure at the top to approve a vaccine.

What sorts of questions are likely to be raised by the president’s infection?

I think it’ll raise questions about privacy and reporting: Who knew what, when, and where did they go? Who were they interacting with (for example, Hope Hicks, as well as those who attended a fundraiser in New Jersey with the president)? Who disclosed having the virus, and when did they disclose it? And what did they know? Those are tough issues.

What kind of treatment do you expect Trump will get?

If the president were to get very sick, that will be an issue, because we’ll get into questions about “Is he going to have access to experimental treatments that he’s been touting and sometimes promoting, such as convalescent plasma?” Depending on how transparent the administration is, this whole issue of unapproved interventions is going to get ratcheted up. We’ll be hearing a lot about that, both to prevent him from getting sicker or if he or his wife were to get very sick. [Editor’s Note: The president’s doctor wrote in a statement on Friday that Trump received a single dose of a not yet approved antibody therapy produced by Regeneron Pharmaceuticals.]

Will Trump’s diagnosis affect how people view his administration’s response to the pandemic?

I do I think it’s going to be hard to be credible, after coming out, again and again, and saying, “COVID isn’t that big a deal” or “It’s on its way out” or “We don’t have to be strict with masking and social distancing.” I mean, I think it takes away some of the credibility in downplaying both the virus and the tricks to at least try to mitigate its spread. It makes them less credible.

This is going to throw all of the discussion about COVID into complete turmoil. COVID was a vulnerability for the president—his biggest risk, I think, in terms of reelection—and for many senators and governors, too. Now Trump getting infected makes it look like his advice and his suggestions are not as credible. I don’t know that his followers and supporters are all going run out and buy masks, but it just makes it harder to credit his account. And my prediction is: it weakens him in terms of the election. But that also has historically made him and his advisers and inner circle crazier.

Going forward, what should people be paying most attention to?

Watch for more pressure for transparency about Trump’s medical condition. Can we trust what the doctors are saying? Because we didn’t really trust what they told us about his health in the past. They were opaque. And the other thing is: watch for people, politically, to start impugning the White House’s and Republicans’ approach to managing the epidemic. You can’t keep the virus out of the White House. And now all those who are infected: it’s a long list, and it’s growing.