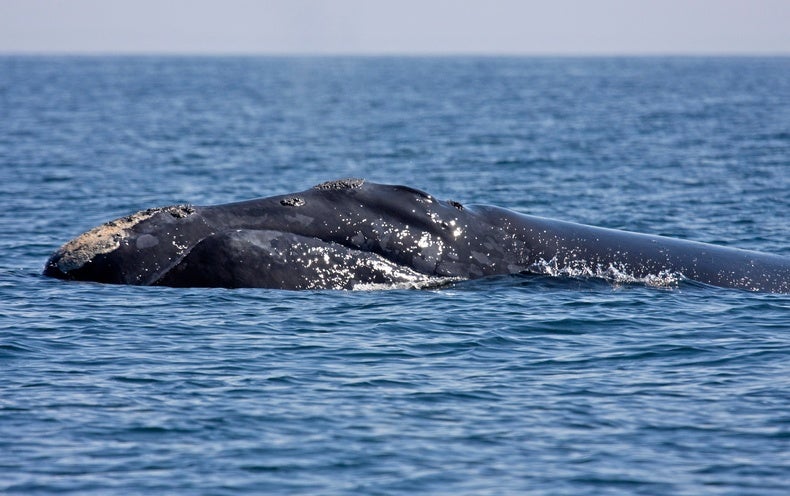 Imagine that you’re at a summer barbeque, catching up with some friends, when you hear the sound of fire truck sirens going off in the distance. You might wonder whether there’s danger nearby, but you and your friends keep talking anyway, slightly louder now that you have to be heard over the noise. A few minutes later, the truck gets closer, and the sirens become so loud that trying to maintain conversation becomes futile. So, you wait until the sound of the sirens fades into the distance once more. But what if the raucous sirens remained close by all afternoon, and you had to wait for several hours before you could carry on with conversation? What if this happened nearly every day?

It turns out that this is a reality for some whales. A 2015 study found that when bowhead whales in the Alaskan Beaufort Sea were exposed to airgun blasts from ships doing seismic surveys used to locate oil and gas reserves, the animals increased their rates of calling to try to be heard over the blasts when they were distant and relatively faint. But as the seismic vessel got closer to them, the whales sharply decreased their call rates, eventually ceasing to call altogether.

Noise from ship traffic has long been recognized as a disturbance for whales, but the high-decibel explosive impulses produced during seismic surveys are an emerging, even more formidable, threat that’s begun to receive attention from marine mammologists in the past few decades.

To carry out a seismic survey, ships tow along several airgun arrays that typically fire off every 10–20 seconds, over periods of days, weeks, or months, albeit not continuously. The “source level,” or loudness, of airgun arrays can exceed 240 decibels (dB) (in water). For reference, a blue whale, one of the world’s loudest animals, can produce calls at a volume of over 180 dB. If the source level of a sound increases by 10 dB, it means that it gets 10 times more intense. So, the sound of seismic airguns is about a million times more intense than a blue whale call—powerful enough to deafen the largest animal in the world if it happens to be near an active seismic vessel.

While airguns can damage whales’ hearing if they’re fired within a kilometer or so of an animal, they can also be disturbingly loud at great distances. In fact, the sound waves can propagate halfway across the globe. The blasts can travel so far not only because they start out so loud, but also because they’re low-frequency (i.e., low-pitch) sounds. Low-frequency sounds attenuate much more slowly than high-frequency sounds, like bird chirps, which travel only short distances. This means that seismic surveys can potentially have a range of behavioral impacts on whales located dozens of kilometers away from airgun arrays.

The low-frequency blasts emitted during surveys overlap with the bandwidth of calls produced by baleen whales, which rely critically on sound for communication. So, in addition to disturbing whales, seismic surveys can “mask” their calls to each other, as scientists say. This explains why bowhead whales in the Alaskan Beaufort Sea stopped calling to each other: it was futile to try to make themselves heard over the high-decibel explosive sounds. This phenomenon has also been documented in blue whales.

The effect of seismic surveys on North Atlantic right whales, a critically endangered species, has yet to be studied, but there is now a dire need to do so. In 2018, the National Oceanic and Atmospheric Administration authorized an expansion of offshore drilling using seismic airgun blasting in the coastal waters of the eastern United States, the right whales’ primary habitat. Geological permits must be approved by the Bureau of Ocean Energy Management before surveys can be conducted, but the proposed seismic operations could disrupt the behavioral patterns (e.g., migration, breeding, and feeding) of marine mammals, including right whales, hundreds of thousands of times each year.

The North Atlantic right whale population’s recovery from 19th-century whaling is already seriously impaired by mortalities from ship collisions and fishing gear entanglements, and the impending seismic surveys in their habitat could present a less visible but pervasive disturbance. Right whales use social calls to mediate vital interactions, including mating, so a reduction in time or space for acoustic communication could have drastic implications for the species’ survival and reproduction.

While increases in low-frequency ocean noise are a potential anthropogenic stressor for all baleen whales, depleted populations experiencing the cumulative effect of multiple stressors are at heightened risk. The behavioral impacts of airgun blasts on endangered species like right whales must be carefully studied using controlled exposure experiments prior to starting actual seismic surveys in their habitat.