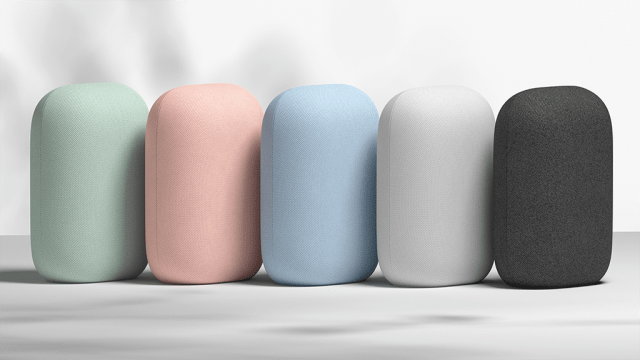 In a lot of ways, smart speakers are the ideal home stereo for the streaming music generation. Telling an Amazon Echo to play whatever song was on your mind for the first time was a bit of a revelation. And music remains one of the most-used and most crucial features of any smart speaker. The only problem is lots of them sound terrible.

Sonos, Google, Apple and Amazon all have smart speakers where music quality is paramount, but a $200 Echo Studio or Sonos one is a tough sell next to a $50 Echo Dot or Nest Mini. Google is trying to fill the gap between those two extremes with the $100 Nest Audio, a speaker that effectively replaces the original Google Home that arrived four years ago. That speaker was meant to be a jack of all trades Google Assistant device, but the Nest Audio has a focus on music quality that wasn’t present in the original. Google piled on praise for the Nest Audio’s ability to deliver music “the way it should sound,” so I’ve spent the last week deciding if a rather diminutive speaker meets those lofty claims.

For $100, the Nest Audio offers dramatically better music quality than what you get from small speakers like the Nest Mini. It’s not the best-sounded smart speaker on the market, but for most people it’ll be a major upgrade and it won’t break the bank.

Be the first to review the Nest Audio?
Your ratings help us make the buyer’s guide better for everyone.

That small size was the first thing I noticed when unboxing the Nest Audio. It’s hard to get a sense for how big it is from Google’s promo pics and videos, but it’s less than 7 inches tall and only 3 inches thick. It’s slightly bigger than the original Google Home, and about the same height as the Sonos One, but much thinner (the One is about 4.7 inches thick). That small size means the Nest Audio is easy to tuck away wherever you want, but it also made me question if it could sound as good as Google promised.

Like all of Google’s current speakers, it is covered with audio-transparent cloth that comes in five colors: Chalk, Charcoal, Sage, Sand and Sky. (I got the boring but versatile “Chalk” option.) Nest Audio is the first of Google’s speakers that is entirely covered with cloth, which adds a nice uniformity to its appearance. The front has four LEDs that activate when you’re talking to the speaker, and the back contains a power port and mute switch. Finally, there are invisible touch-sensitive buttons on the top to play or pause audio and adjust the volume. Sadly (but not surprisingly), there’s no audio input jack like there is on the Home Max, so you won’t be able to use it with a turntable or other stereo equipment.

If you’ve set up a Google Assistant device before, nothing has changed. You do it through the Google Home app for iOS and Android; Just plug in the Nest Audio, open the app and go through the simple instructions that get your speaker connected to WiFI. You’ll also pick your preferred music service.

If you haven’t used a Google speaker before, it’s worth noting that you can’t use a few of the more popular music apps: Apple Music and Amazon Music are not available.Google Assistant does work with YouTube Music, Pandora, Deezer and Spotify. Not having access to Amazon or Apple is a bummer — but between Spotify and YouTube Music, most Nest Audio users should be covered. Besides, pretty much every music app on Android will let you cast to the Nest Audio, even Apple Music.

Once that’s all set, you can start asking Nest Audio to play whatever you want to hear, whether it’s music, podcasts, audiobooks or streams from apps like TuneIn or IHeartRadio. The experience isn’t very different from what the Google Assistant has done for years, which isn’t a bad thing. Google does say that the Nest Audio should be faster at commands like skipping songs and adjusting volume because of the ML hardware engine, which processes some commands on-device rather than in the cloud. I didn’t notice a difference compared to the Home Max, which is the Google Assistant speaker I use the most. But my colleague Cherlynn Low says she noticed a significant improvement over the original Home.

I will say that the Assistant isn’t always the best at identifying the music I ask it to play, though, an experience corroborated by our Managing Editor Terrence O’Brien. Telling it to “play some music I like” always pulled up “That’s What I Like” by Bruno Mars, while asking it to “play Metallica’s self-titled album” would pull up a specific song from the record followed by a bunch of other random Metallica tunes. Some of that appears to be due to the Assistant not understanding what I was looking for, but it also had to do with the music service I was using. When I asked for the self-titled Metallica album on Spotify, I got just what I expected.

From a feature perspective, the Nest Audio is basically identical to the Nest Mini and other Google Assistant speakers — so what I really wanted to know was how it sounds. My initial impression wasn’t overwhelmingly positive. Right out of the box it sounded a bit muddy, especially at lower volumes. Specifically, mids and highs mushed together, though the bass performance was clearly better than what you’d get out of the original Google Home or Nest Mini. That’s thanks to its dedicated 75mm woofer and 19mm tweeter; the Google Home and Nest Mini make do with a single driver.

For context, I spend most of my days listening to either a single Apple HomePod ($300), a pair of Google Home Max speakers ($600) or a pair of Sonos Play:1 speakers (Play:1 is no longer available, but two of the sonically identical Sonos One SL costs $360). Expecting similar sound from a $100 speaker that’s much smaller than those isn’t really fair.

After spending some time with the Nest Audio, I gained an appreciation for its sound quality. For a relatively small, single speaker, it succeeds at offering drastically better audio than you’ll get from options like the original Google Home, the Nest Mini or Amazon’s older Echo Dots (I haven’t heard the new one yet). As a speaker meant to be affordable while offering good music quality, I think Google hit the mark.

Turning the volume up to between 50 and 80 percent gave some noticeable thump and increased clarity to electro-pop like Chvrches or The Japanese House, and it did a good job at reproducing the distinct layered guitars of Metallica’s black album, even though it’s not a stereo speaker. A delicate song like “Beatrice” by Dizzy built to a wonderful crescendo with vocals coming through strong and clear. The unusual instrumentation of Gustavo Santaololla’s score for The Last of Us Part II was another good test case, as the baritone and bass guitars used throughout had enough low-end to come through with power. Overall, the bass presence isn’t massive, but it’s noticeable.

That said, the Nest Audio can’t compete with a single Sonos One. When properly tuned using the company’s TruePlay algorithm, the One is much louder and offers fuller, more distinct sound. But again, we’re talking about a speaker that costs twice as much. What Google pulls off here for $100 in a compact space is impressive and far exceeds what it did in 2016 with the Google Home. But if you’re an avid music listener you might benefit from a larger speaker.

Google’s Home Max and Apple’s HomePod both listen to and dynamically tune their sound — that keeps the bass from getting overly boomy when a speaker is up against a wall, for example. The Nest Audio, on the other hand, doesn’t continuously tune itself. Instead,  Google tuned the speaker in its labs and in test homes using data from more than 2,500 simulated placements of the speaker.

The speaker does have some adaptive software, though. Media EQ analyses what you’re listening to (music vs. podcasts, for example) and adapts the audio to best fit the content. Ambient IQ, meanwhile, adapts the Assistant output based on background noise so you can better hear it in a noisier environment. I can’t say I noticed much of a difference, but I mainly used the speakers for music.

Probably the biggest issue I had with the Nest Audio was simply that its three-microphone array wasn’t as sensitive as those in the HomePod or Home Max. I often had to repeat myself a few times to get the speaker’s attention while playing back music. And one time, the speaker made the grave mistake of thinking I wanted the volume at 100 percent when I was just asking it to turn the volume down. In case you were wondering, the Nest Audio can be painfully loud at full volume.

That’s doubly true when pairing two Nest Audio speakers in stereo. Basically all smart speakers let you do this now, so it’s not an unexpected feature, but it improves the entire Nest Audio experience in a notable way. Obviously, stereo separation is important for serious music listeners, but having two speakers going simultaneously means everything simply sounds better, with vastly improved presence, bass response and overall volume. If you have a larger living room that you want to fill with sound, I’d recommend shelling out for two of these speakers and running them as a stereo pair.

At this point, the smart speaker market is pretty crowded, but there aren’t a lot of speakers in the $100 range that have the Nest Audio’s focus on sound quality. A natural comparison point is Amazon’s new, spherical Echo, but we haven’t had a chance to test it yet. That said, I’ve been fairly impressed with the audio improvements Amazon has made to its Echo products over the years — if you prefer Alexa over the Google Assistant, there’s a good chance that the new Echo might be the better option.

If you up your budget to $200, though, speakers like Amazon’s Echo Studio and the Sonos One provide even better sound quality. No surprise, given that they cost twice as much and are significantly larger than the Nest Audio. But if you’re looking to spend that much, two Nest Audio speakers give you the flexibility of running in stereo or setting up a multi-room system.

While the Nest Audio didn’t immediately impress me, I think Google’s execution is smart. It’s not trying to replace larger, high-quality speakers like the Sonos One or its own Home Max. Instead, it provides a huge audio quality upgrade over small, cheap speakers like the Nest Mini and is significantly better than the original Google Home, without pushing the price into the $200 range. Google’s also selling them in a pair for $180, which makes a stereo or multi-room setup easily attainable. That said, price is still the bottom line for most people, so I expect the Echo Dot and Nest Mini to remain the more popular options.

If you care at all about music, though, I urge you to consider the Nest Audio instead. Smart speakers are not a necessity, they’re a luxury, so budget an extra $50 and enjoy your music with improved bass and an audio presence that goes far beyond what you’ll get from a budget device. While the Nest Audio isn’t the best I’ve ever heard, it’s better than what lots of people currently use to listen to music. The combination of “good enough” sound quality and a low price point make it one of the best smart speakers you can buy.

speaker, nest, nest audio, google nest audio, google assistant, google, smart speaker, review, gear
All products recommended by Engadget are selected by our editorial team, independent of our parent company. Some of our stories include affiliate links. If you buy something through one of these links, we may earn an affiliate commission.