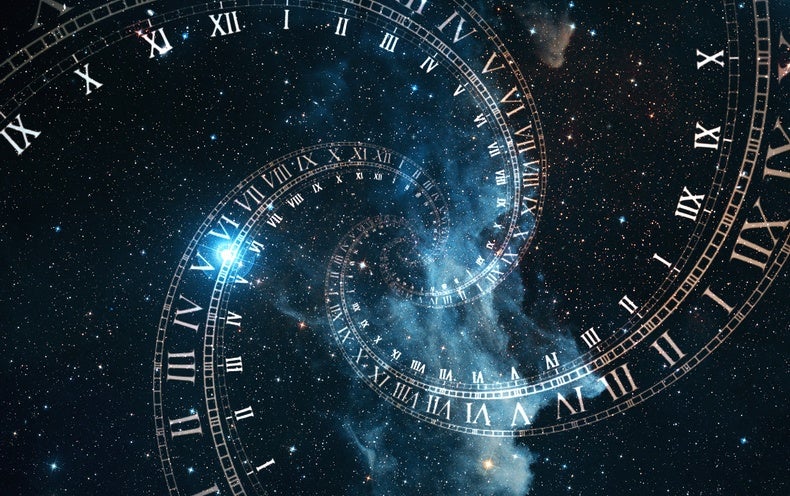 Albert Einstein’s twin paradox is one of the most famous thought experiments in physics. It postulates that if you send one of two twins on a return trip to a star at near light speed, they will be younger than their identical sibling when they return home. The age difference is a consequence of something called time dilation, which is described by Einstein’s special theory of relativity: the faster you travel, the slower time appears to pass.

But what if we introduce quantum theory into the problem? Physicists Alexander Smith of Saint Anselm College and Dartmouth College and Mehdi Ahmadi of Santa Clara University tackle this idea in a study published today in the journal Nature Communications. The scientists imagine measuring a quantum atomic clock experiencing two different times while it is placed in superposition—a quirk of quantum mechanics in which something appears to exist in two places at once. “We know from Einstein’s special theory of relativity that when a clock moves relative to another clock, the time shown on it slows down,” Smith says. “But quantum mechanics allows you to start thinking about what happens if this clock were to move in a superposition of two different speeds.”

Superposition is a strange aspect of quantum physics where an object can initially be in multiple locations simultaneously, yet when it is observed, only one of those states becomes true. Particles can be placed in superposition in certain experiments, such as those using a beam splitter to divide photons of light, to show the phenomenon in action. Both of the particles in superposition appear to share information until they are observed, making the phenomenon useful for applications such as encryption and quantum communications.

Some atoms, meanwhile, can act as atomic clocks, with their rate of decay noting the passage of time. In their paper, Smith and Ahmadi describe how an atomic clock placed in superposition could experience time dilation, just like Einstein’s twins experiment, if one of the superposition states is moved at several meters per second while the other remains stationary. Instead of the atom simply being in two states at once—as described in the Schrödinger’s cat experiment—the states would actually age differently. “It’s kind of like ‘Schrödinger’s clock,’” Smith says.

Vlatko Vedral, a physicist at the University of Oxford, who was not involved in the study, says the idea allows for a rare opportunity to merge quantum mechanics with relativity—two areas of physics that infamously do not mix well. “You can actually combine the superposition principle in quantum mechanics with this notion of time dilation in relativity,” he says. “It’s exactly Einstein’s twins but now applied to the same system. That’s the twist. The final state is really amazing, because the atom is back in the same position where you started, but internally, it feels two different times. It’s in a superposition of being older and younger at the same time.”

Though the effect is far too small to be noticeable to humans, this idea of quantum time dilation could have repercussions for high-precision quantum clocks. And crucially, the new study suggests it might be possible to measure the effect experimentally. “I’m hoping this paper really prompts people to try to do this in the lab,” Vedral says. And Smith suggests an experimental proposal could be drafted in the near future, perhaps using spectroscopy to split light, to look for this signature of quantum time dilation. “We might be able to see this in the next five to ten years,” he says. “I don’t think it’s science fiction by any means.”