How Geologists Reveal the Secrets of the Solar System

How Geologists Reveal the Secrets of the Solar System 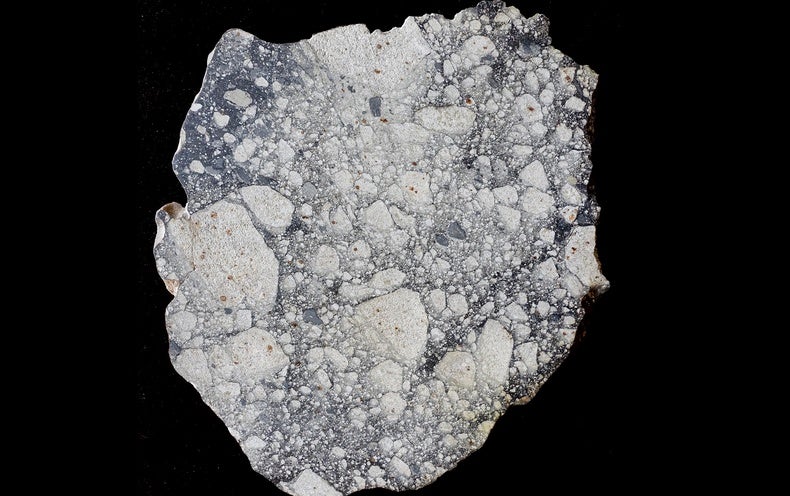 Of all the sciences, astronomy has shed particularly brilliant light on our place in the universe. But it is not well-known that much of our understanding of outer space comes from a different discipline altogether: geology. Ask somebody to name a tool that we use to uncover the secrets of the cosmos, and they’ll likely say telescope rather than microscope or rock hammer.

But if you think about it, pretty much anything we can get our hands on that comes from outer space is a rock. Yes, scraps of space hardware are sometimes safely returned to Earth; and yes, particles from the solar wind were safely returned to Earth by NASA’s Genesis mission in 2004. But the amount of extraterrestrial rock that we have on Earth exceeds the lot. We have rock from the moon, thanks to the Apollo and Luna missions; we also have moon rocks and rocks from Mars that were blasted into space by asteroid impacts on these bodies surfaces, and eventually wandered close to our planet and fell to Earth as meteorites. We have rocks from comets thanks to the Stardust mission; and from the asteroid belt, from to the pitter-patter of meteorites that rain from the skies. We could soon have rocks from asteroid Bennu, now that NASA’s sample-return mission OSIRIS-Rex has made a successful touchdown. And we can study the remnants of impact craters created by asteroids striking Earth’s surface at hypersonic velocity.

PIECES OF THE NASCENT SOLAR SYSTEM

In fact, rocks are practically the only way we can hold pieces of outer space. Telescopes and robotic space missions, powerful as they are, can only take us so far, and from celestial rocks—particularly meteorites—we have learned about the solar system and beyond. While meteorites have a special place in many a heart (mine included), they are still rocks, and as the old saying goes, nobody knows a rock better than a geologist. And so, just like we would with any old Earth rock, we use the tools of geology to understand the ones that come from space.

All stars begin their lives when interstellar nebulae collapse under gravity; the densest part, at the center, becomes the star itself; the rest forms a rotating, pancake-shaped cloud of gas and dust known as a protoplanetary disk. These disks begin crystallizing into microscopic motes of rocky dust, which eventually coalesce to form asteroids, comets and planets. We have telescopic observations of this process happening in real time from telescopes like ALMA and Hubble, but there is only so much we can learn from light-years away.

Meteorites give us a microscopic insight into the protoplanetary disk from which our solar system formed, because many still preserve these primordial motes of rocky dust. It is no stretch to say that they are pieces of the disk. Amongst the first to recognize this was English geologist Henry Clifton Sorby, who, in a lecture in 1877, said that “meteorites are the residual cosmical matter, not collected into planets.” He came to this startling conclusion using the knowledge and skills he had gained by studying Earthly rocks down the barrel of a geological microscope. Sorby’s great insight transformed our view of meteorites and the solar system forever.

By teasing apart these motes of dust in the laboratory over the past 150 years, we have come to know their geological characters, and from them we have inferred with confidence the sorts of environments that existed in our own nascent solar system and other solar systems across the galaxy. Without meteorites and knowledge of how Earthly rocks form, these long-lost environments would be entirely out of our reach, and the mechanisms by which clockworklike systems of planets form would be almost impossible to pin down.

Since they’re made from the primordial, meteorites are the oldest objects we can literally get our hands on. By dating them, we have put a high-precision timescale to the infant solar system and the events that unfolded within it. We date meteorites using the same tool of geology that we use to date Earthly rocks: radioactive dating. In fact, the age of the solar system itself—4,567,000,000 years (that’s 4.567 billion years) old—is defined by the radioactive decay of uranium into lead inside meteorites. Geologists who specialize in dating rocks (geochronologists) have measured this age to plus or minus 160,000 years—equivalent to knowing the distance from Manchester, U.K., to New York City to within a few hundred meters).

Closer to home, geologists—perhaps none more famous than the late Eugene “Gene” Shoemaker—have played a crucial role in understanding our own planet’s place in space. In the 1950s, Shoemaker, a geologist by training, and his colleagues discovered shocked quartz (a mineral that only forms under the extreme pressures caused by impacts from space) in the rocks surrounding Barringer Crater (aka “Meteor Crater”) in Arizona and became the first to definitively prove its extraterrestrial origin from an asteroid collision with Earth. (At the time, there was a controversy as to whether the crater was caused by an asteroid or was simply the vent of an extinct volcano). Geological mapping and the discovery of more shocked quartz also led Shoemaker and his colleagues to identify a second impact crater: the 15-mile wide Nördlinger Ries impact crater in Bavaria, Germany. Shoemaker’s research into terrestrial impact craters led him in the 1960s to resurrect an old idea that the moon’s craters were formed by impacts: today, we know he was right, and recognise that the moon’s surface is indeed peppered by scars from impacts from space.

We have Shoemaker to thank in part for the Apollo moon rocks, too. Using his geological field skills, he trained the astronauts how to collect rock samples; those samples the astronauts brought back have revolutionized our view of the moon. (On that note, the only scientist ever to walk on the moon, Harrison “Jack” Schmitt, who rode there aboard Apollo 17, the last of the series, was a geologist).

In 1997, Shoemaker became the first (and still only) person to be laid to rest on the moon, when some of his ashes were sent to the moon on board the Lunar Prospector spacecraft.

And so, with that, I’ll rephrase the old saying: nobody knows a space rock better than a geologist. And, as it turns out, space rocks (meteorites and moon rocks alike) and impact craters, when viewed through a geological lens, have a lot to tell us about the cosmos.