Will the Universe Remember Us after We’re Gone?

Will the Universe Remember Us after We’re Gone? 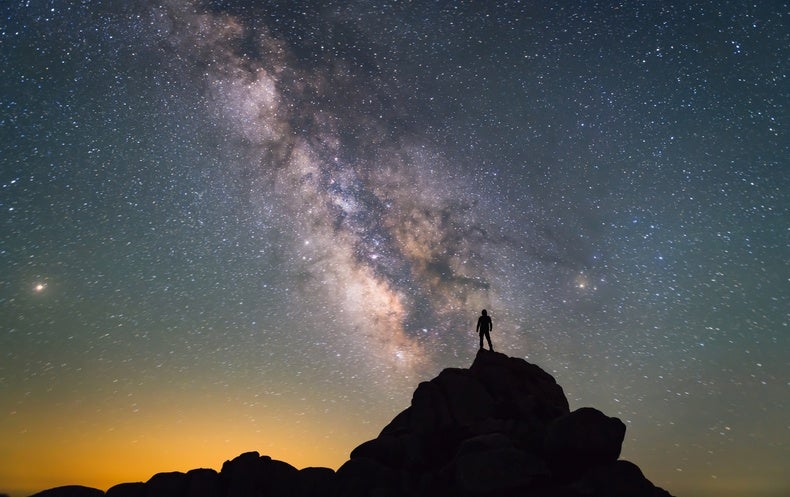 I’m a compulsive journal-scribbler. This habit, which goes back to my teens, has proved useful to my career. All my articles and books start as journal entries. But my motivation is not merely professional. If I don’t record my thoughts, I won’t remember them, and they won’t matter. So I fear. This feeling has grown as I’ve aged.

Compounding my concern is the possibility—no, probability—that one day humanity and all its residues will vanish. Our works of science, mathematics, philosophy, art, music and, yes, journalism will slip back into the void whence they came. Everything we have thought and done will be for naught. If nothing about us endures, if nothing is remembered, we might as well never have existed.

No wonder so many of us, even in this age of scientific materialism, still believe in God. An immortal, omniscient being watches over each and every one of us, and not just celebrities like Einstein and Beyonce. He/she/it/they also surely remembers us after we’re gone, like a cosmic backup device with infinite storage capacity. Supposedly. If this divine entity does not exist, and someday all traces of us disappear forever, in what sense do our lives matter?

Scientists are not immune to such anxieties. Existential angst, I suspect, accounts for physicists’ belief in conservation of information. I first heard about this proposition years ago, but I’ve only given it serious consideration over the last few months, which I’ve spent trying to learn quantum mechanics.

Two of my main texts are The Theoretical Minimum books on classical and quantum mechanics by Stanford physicist Leonard Susskind (with two co-authors). Susskind imparts “what you need to know to start doing physics.” One thing we definitely need to know, according to Susskind, is that “information is never lost.” This law, Susskind asserts, “underlies everything else.”

The minus-first law encompasses the principle of determinism, which holds that if you know the current state of a system, you know all of its past and future. The French polymath Simon-Pierre LaPlace famously spelled out the implications of determinism over 200 years ago:

“An intellect which at a certain moment would know all forces that set nature in motion, and all positions of all items of which nature is composed, if this intellect were also vast enough to submit these data to analysis, it would embrace in a single formula the movements of the greatest bodies of the universe and those of the tiniest atom; for such an intellect nothing would be uncertain and the future just like the past would be present before its eyes.”

This omniscient “intellect” has come to be known as LaPlace’s demon. Susskind insists that quantum mechanics, although not deterministic in the same way as classical mechanics, still conforms to the minus-first law. In a 2008 interview he said the minus-first law “underpins everything, including classical physics, thermodynamics, quantum mechanics, energy conservation, that physicists have believed for hundreds of years.”

In the 1980s Stephen Hawking challenged the minus-first law, claiming that black holes destroy information. Hawking’s hypothesis “touched off a crisis in physics, a clash of basic principles like no other since Einstein was young,” Susskind said in 2008. He rebutted Hawking in papers and a popular book, The Black Hole War: My Battle with Stephen Hawking to Make the World Safe for Quantum Mechanics.

All the information sucked into a black hole, Susskind argues, is preserved in its outer membrane, or “event horizon,” where space and time undergo bizarre distortions. In a review of Black Hole War, journalist George Johnson bravely takes a stab at explaining Susskind’s thesis: “A description of everything that falls into a black hole, whether a book or an entire civilization, is recorded on the surface of its horizon and radiated back like imagery on a giant drive-in movie screen.”

Susskind, as you might guess from Johnson’s review, is fond of theories that cannot be empirically tested and hence potentially falsified. In his 2005 book The Cosmic Landscape, Susskind contends that our universe is just a hillock in an infinite landscape of universes. This proposal is pure speculation, and hence arguably unscientific, because we have no way to prove or disprove the existence of other universes.

Perhaps Susskind and other physicists don’t want us lay folk to take ideas like the multiverse or minus-first law too seriously. Maybe these are just metaphors, poetic fancies, like the Holy Ghost in Catholicism. But physicists seem to pride themselves on saying what they mean. So, I’m going to take Susskind at his word when he declares that “information is never lost.”

Let me tease out the implications of that remarkable statement. First, as I have argued previously, the concept of information doesn’t make any sense in the absence of something to be informed, that is, a mind. Information requires—it presupposes—consciousness. So, if information is conserved, so is consciousness. If consciousness exists now, it must always exist. Or so the minus-first law implies.

In fact, many scientists and philosophers have proposed that consciousness is as fundamental as matter, or even more fundamental. I’ve lumped these speculations together under the label neo-geocentrism, because they resurrect the ancient, narcissistic notion that the universe revolves around us. Neo-geocentric theories represent attempts to sneak a consoling religious assumption—this universe is all about us—back into science, and so does conservation of information.

If I had to rank laws of physics, I’d go with the second law of thermodynamics, which holds that disorder, or entropy, always increases. Our expanding cosmos is headed toward heat death, a state of terminal boringness, in which nothing ever happens. The second law of thermodynamics, evidence for which I see whenever I look in the mirror or read the news, trumps the minus-first law.

Actually, I’m suspicious of all “laws” of physics, which strike me as manifestations of scientific hubris. Scientists take an assumption that applies under certain very tightly controlled conditions, usually with lots of qualifications, and transform it into a cosmic principle that applies to all things at all times in all places. But I’m especially skeptical of the minus-first law.

Never mind Hawking’s conjecture that black holes destroy information. I’m worried about far more mundane processes. Three years ago, strokes severely damaged my father’s memory, making it hard for him to recognize me and my siblings. Last June he died, at the age of 96, and my stepmother had his body cremated. My father persists, sort of, in the fragmentary, fading recollections of those who loved him. Polymath Douglas Hofstadter coined the heartbreaking phrase “soular coronas” to describe our memories of those eclipsed by death. But one day we’ll die too.

The minus-first law implies that the universe will bear the imprint of my father’s life forever. Long after our sun and even the entire Milky Way have flickered out, aliens with the godlike powers of LaPlace’s demon could in principle (that handy, all-purpose hedge) reconstruct the lives of my father and every other person who has ever lived.

That’s a nice thought (which inspired the 1996 book The Physics of Immortality by physicist Frank Tipler.) But I don’t buy conservation of information any more than I buy reincarnation or heaven—or a god who cherishes us. These propositions, scientific and religious, represent understandable but finally unpersuasive attempts at consolation. My contemplation of the inevitable loss of everyone and everything I love unsettles me. But I’d rather face death squarely than take refuge in false assurances from priests or physicists.

In The Black Hole War, Susskind strikes a rare (for him) note of humility: “Very likely we are still confused beginners with very wrong mental pictures, and ultimate reality remains far beyond our grasp.” (I found this quote in a blog post by physicist Peter Woit.) On this point, Susskind and I agree.

Meanwhile, as my end looms, I keep frantically filling up notebooks.

The Twilight of Science’s High Priests

The Delusion of Scientific Omniscience

Multiverse Theories Are Bad for Science

Can Mysticism Help Us Solve the Mind-Body Problem?

Why information can’t be the basis of reality

See also “Strange Loops All the Way Down,” a chapter in my free online book Mind-Body Problems.